Which Psyllium Husk Brand is Better? 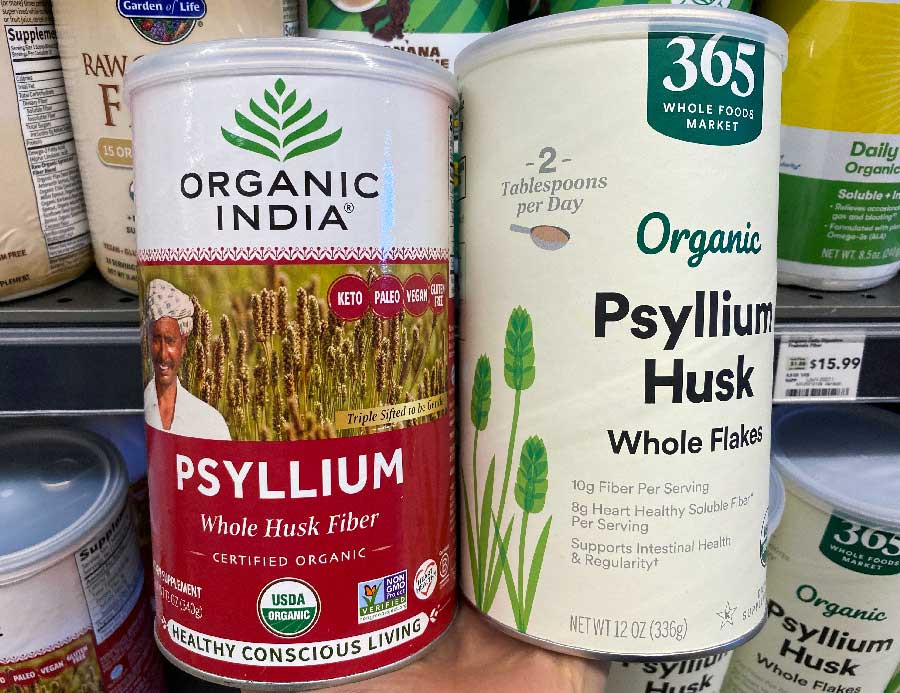 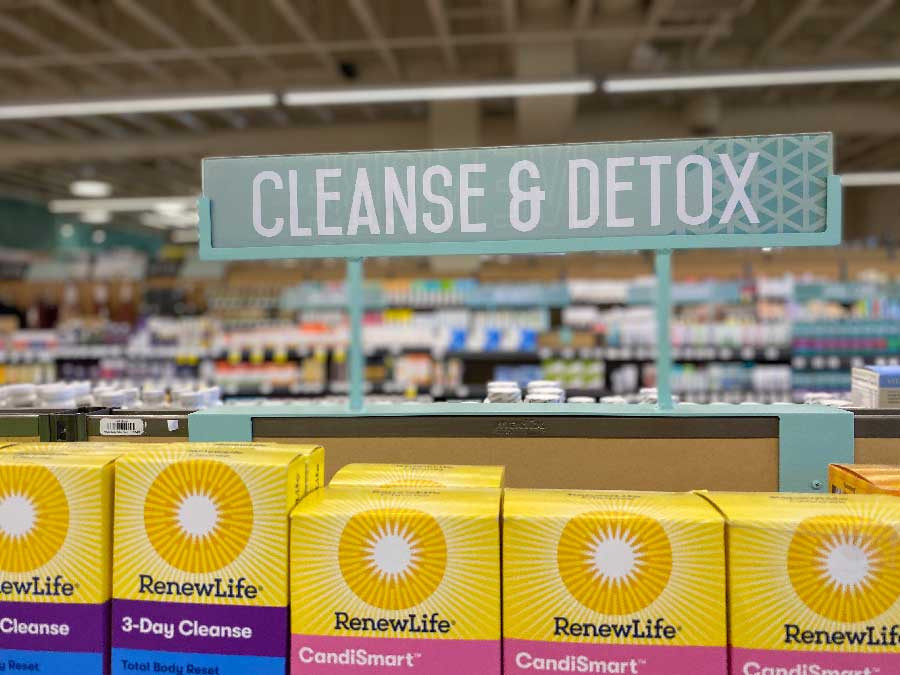 First of all, let’s clarify what Psyllium Husk is and why there is so much hype about it lately. Psyllium Husk is a soluble fiber which is obtained from the husks of Asian natural plant called Plantago ovata or psyllium. The seed of this plant is ground into the powder and is used as dietary supplement. Psyllium Husk grows in most Asian countries and even in some parts of the U.S., but it is most common for India.

What properties of Psyllium Husk make it a valuable source of fiber?

In fact, it is a laxative that improves bowel movements and helps get rid of constipation. People who have added Psyllium Husk powder to their diet reported that their digestive system worked better and most negative digestive issues that had been bothering them for some period of time had disappeared. In other words, psyllium is a prebiotic that helps support immune system and is known to lower cholesterol and help decrease the risk of heart disease.

Can Psyllium Husk powder be used in baking?

Yes, it can. I’ve seen so many recipes where it was used as a natural thickener. In fact, I add it when making gluten free cookies, cupcakes and even bread. So, it you love healthy cooking Psyllium Husk powder is a must-have ingredient for your home baked products.

All this mentioned above makes it clear why Psyllium Husk has become so popular lately. It serves as a natural alternative to drugstore medicines that fail to act so mildly and effectively as Psyllium Husk. Psyllium Husk side effects are unknown except the individual allergenic reaction which is quite rare. 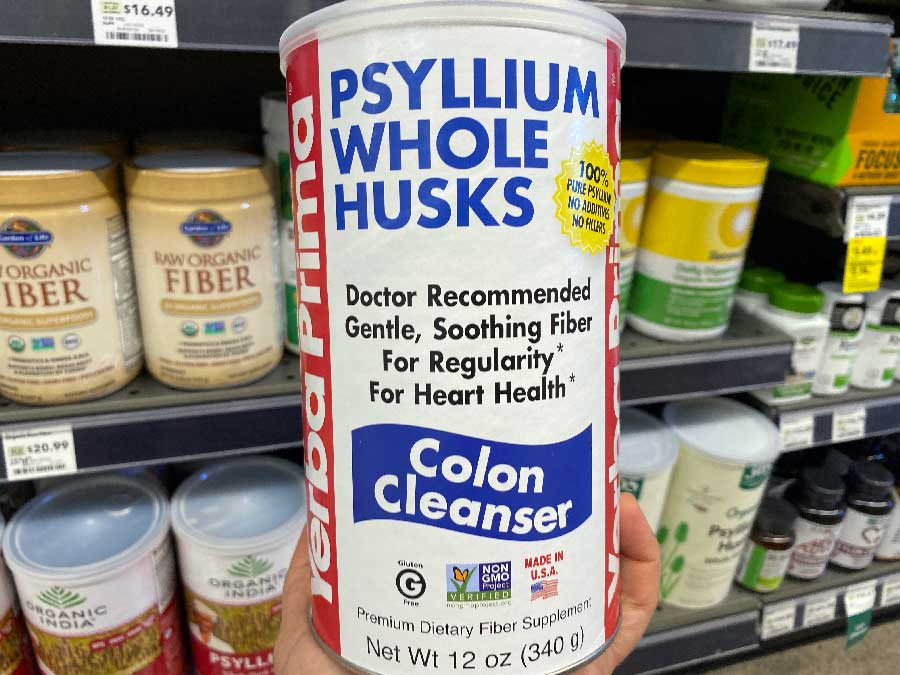 The first one in my list is Psyllium Whole Husk Colon Cleanse by Yerba Prima. It is characterized as premium dietary fiber supplement with no additives and fillers. 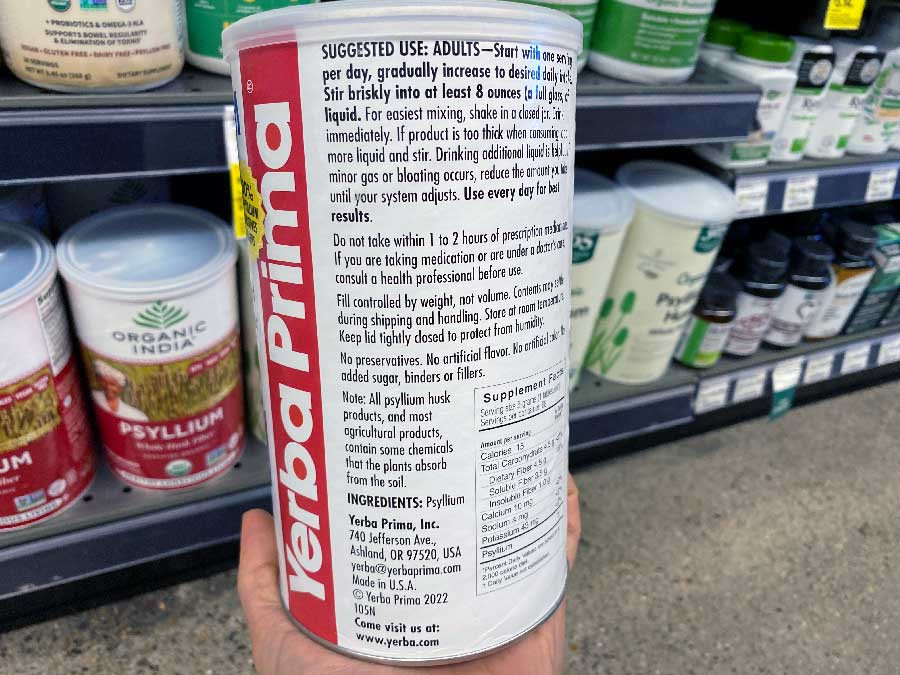 So, it contains only 100% pure Psyllium Husk powder. The bottle net weight is 340 g, and it is recommended to take 1 serving of it dissolved in water or other liquid every day about an hour before meal. 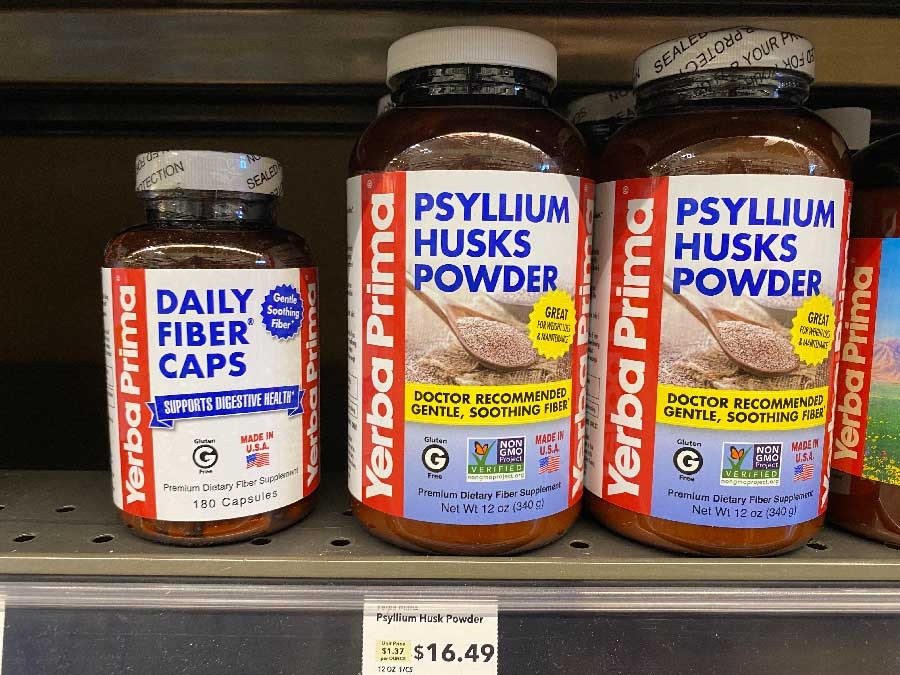 It costs $16.49 in the local store. By the way, this supplement is made in USA, and was not brought here from India. 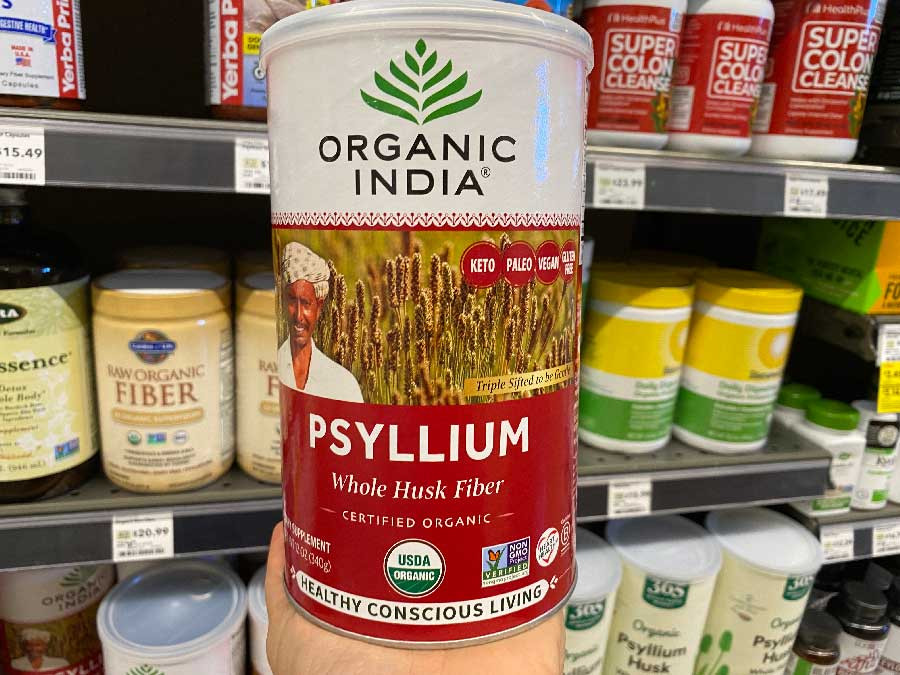 Another option you can easily find in store is Organic India Psyllium Whole Husk Fiber. The bottle net weight is the same: 340 g and it contains only Psyllium Husk powder with no preservatives, artificial colors or flavors. It costs $16.79 and I can say that these two products are practically identical when it comes to the ingredients and the price. 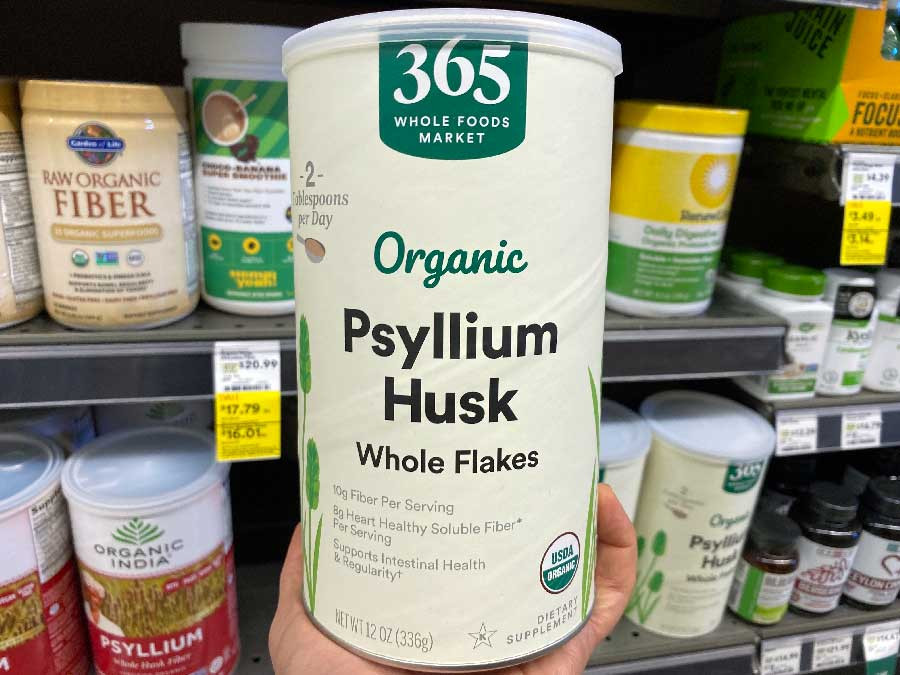 I do most of my grocery shopping at Whole Foods Market and this chain store retailer has got its own organic Psyllium Husk Whole Flakes. 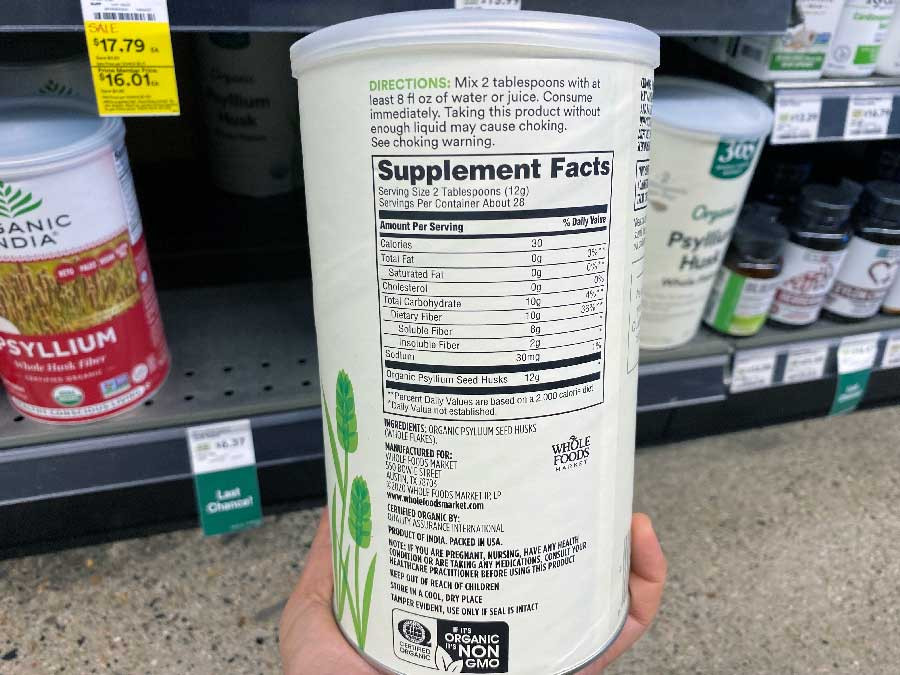 The net weight of the bottle is 336 g which is nearly the same, the ingredients are the same – just organic Psyllium Husk flakes, the product of India packed in the USA. And, finally, the only substantial difference: the price. It costs just $6.37. 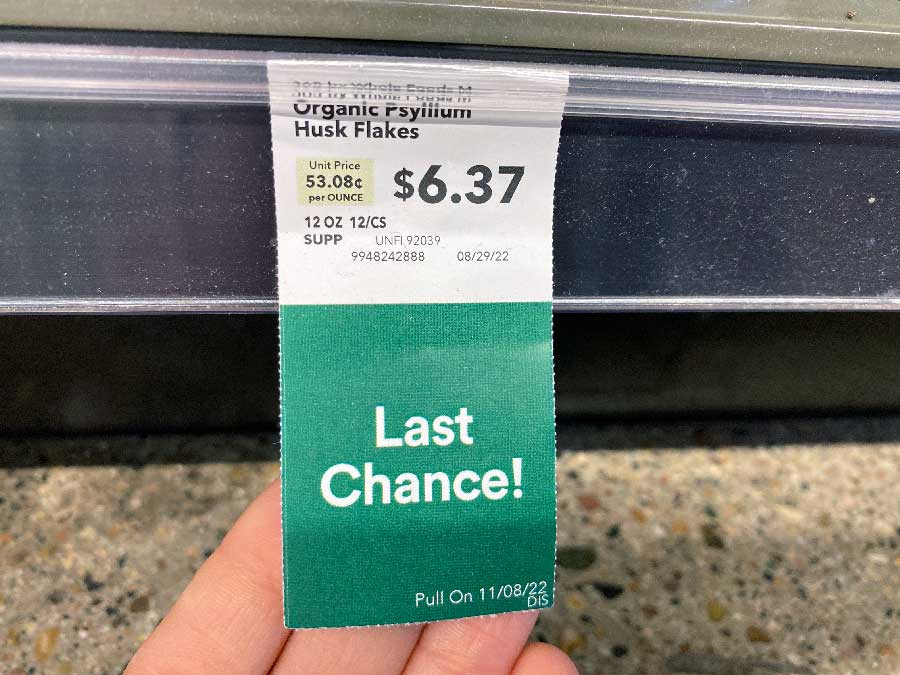 All three Psyllium Husk brands can be used in baking as it is organic plant powder without any additives. And there is one more brand which you won’t find in store but can purchase online only. 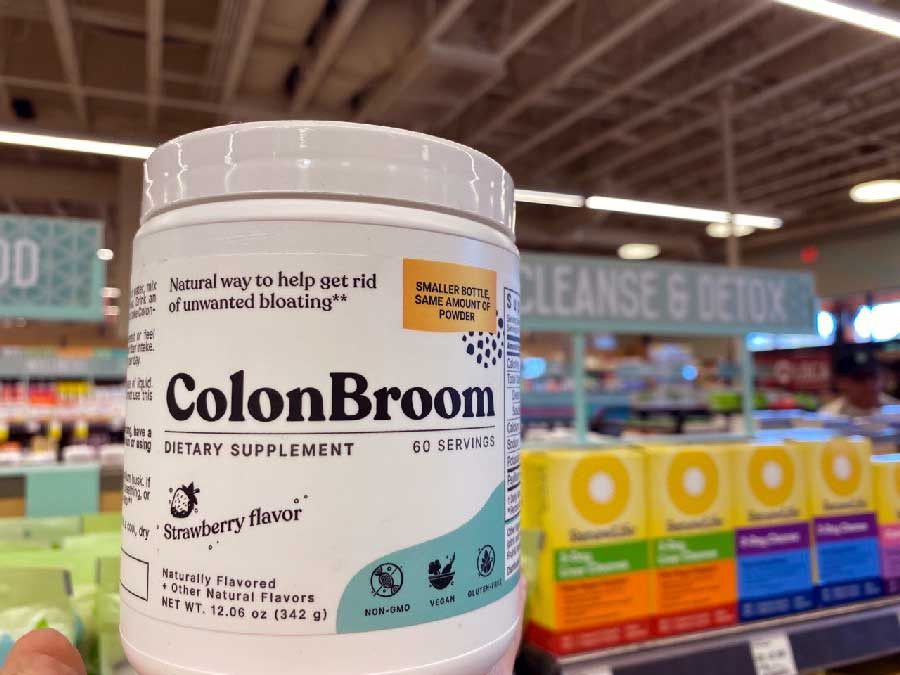 It is ColonBroom, a dietary supplement with strawberry flavor. The bottle net weight is 342 g which is the same as three other brands, but the price is the most expensive, $55 at Amazon with 30% discount. Let’s check the ingredients to figure out why its price is so high. In addition to Psyllium Husk powder, which is the main ingredients here as well, ColonBroom contains lemon juice in a crystallized form, citric acid, stevia leaf extract, organic rice hulls, natural flavor, sea salt and fruit and vegetable juice to add color to the drink. Even though the ingredients are all natural, ColonBroom can’t be added to pastry when baking. 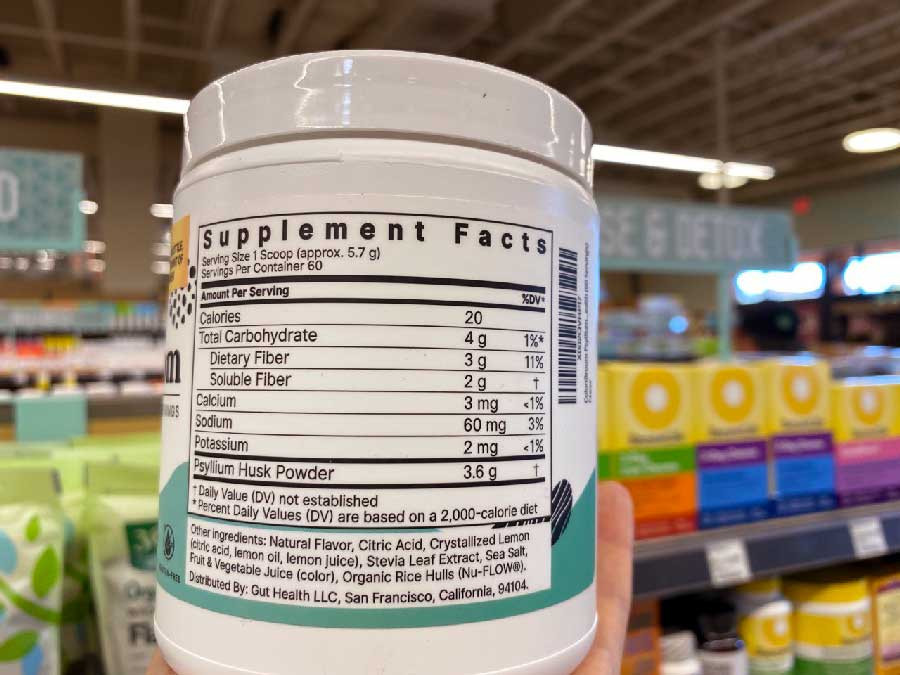 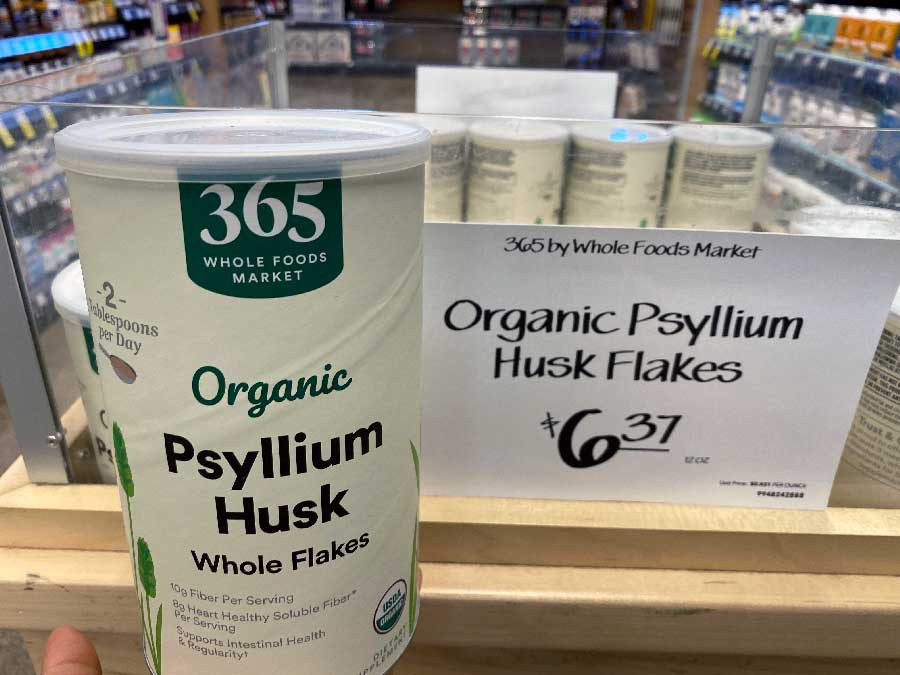 Which Psyllium Husk Brand is Better?

With Psyllium Husk Powder as the main ingredient in many dietary supplements I decided to look into this important natural source of fiber to figure out which brand of Psyllium Husk is the best to buy.