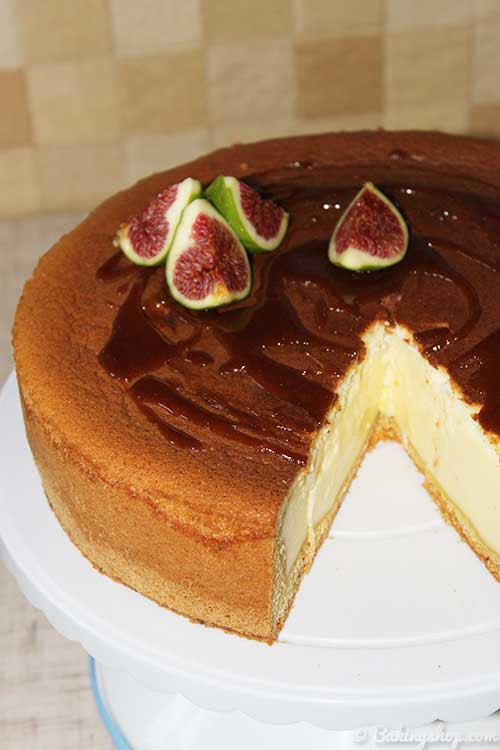 My guess would be you have no idea if you were born in the US, what quark is. Sounds like a duck call. But it is actually a light creamy cheese that is similar to Greek yogurt or sour cream. It has way less calories and is higher in protein. It is great for baking. And it makes the Kasekuchen a German cheesecake.

It used to be impossible to find quark in the United States. But you just have to do some searching. There are now some mainstream brands that you can find it a specialty cheese shop. But you can always make it.

Traditional German cheesecake is made with a pastry style piecrust. This is too much work and graham cracker crusts are better anyway. The cheesecake part is very simple as it is just mixing and beating. All you have to do is put it in the oven and it will do its magic. It turns beautifully golden brown and almost acts like a soufflé. Once you let it out of the oven and cool it in the refrigerator overnight it removes perfectly from a spring form pan.

The taste and texture of quark is different than cream cheese so it is a different cheesecake than people are use to. It is lighter than a New York style cheesecake as it seems like it's a moose or custard like texture. One can serve it with fresh fruit or syrup or jambs even with a sprinkle of powdered sugar. It is a much healthier almost diet version of cheesecake.

Here is a recipe:

Ingredients for the crust:

Ingredients for the cake filling

Press crumbs into the bottom of a 9-inch spring form pan.

In a large bowl, use an electric mixer and mix the egg yolks, sugar and vanilla extract until well combined.

Add quark, milk, flour, and lemon juice. Mix until it is creamy and combined.

In a separate mixing bowl, beat egg whites on high speed until they form stiff peaks.

For cake filling into the spring form pan.

Turn off the heat in the oven, cracked the door let the cake rest for 10 minutes in the oven.

Cool cake on a wire rack for an hour and then move it to the refrigerator for a few hours to cool.

Release sides of the pan slice and serve. It tastes great with fresh fruit, jams nuts or powdered sugar.