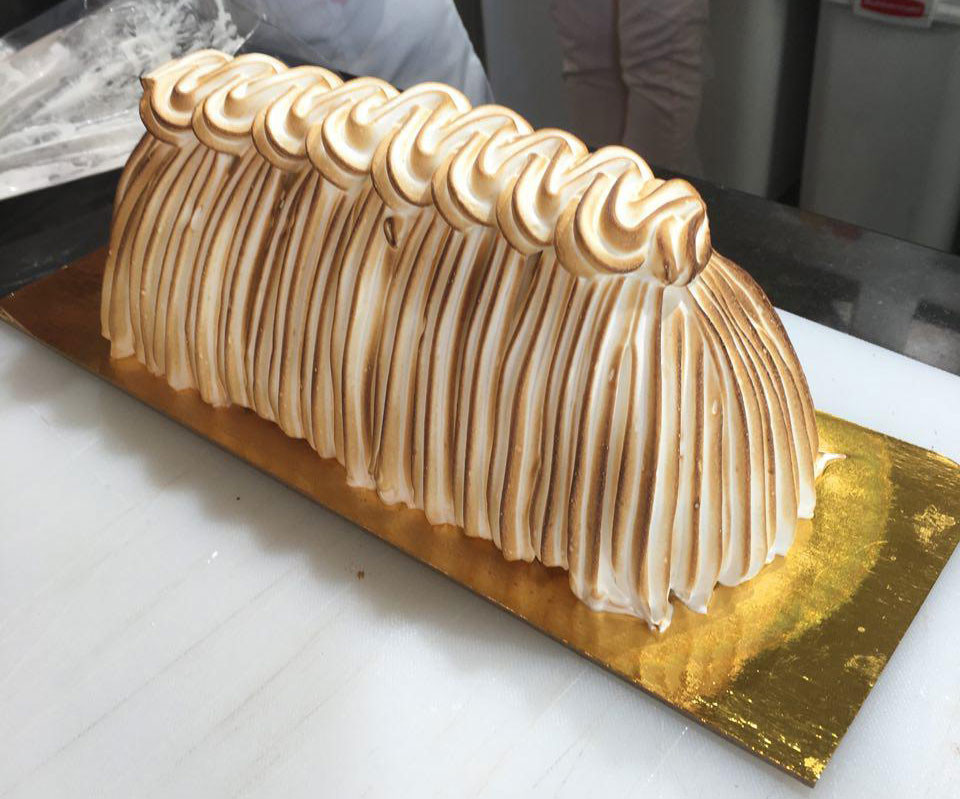 If there is a unicorn of the dessert world it would have to be Baked Alaska. Everyone has heard of it but few have ever seen it in real life. Probably because it has three components that make it difficult to make at home. It is a circle of cake that is topped with a dome of ice cream and covered with meringue. It is also intimidating as it defies the laws of physics. When you bake this dessert in a hot oven it crisps and browns the meringue exterior but it leaves the ice cream frozen and firm in the core. Oftentimes restaurants douse the creation with liquor and set it on fire at the table.

Basically this dessert is a dressed up ice cream cake that is really not more difficult than other versions. It is very sweet and has a traditional bomb shape, which makes it impressive but difficult to slice and serve. Typically it falls apart when you move the slices from the platter to the plate. One goal is to reengineer the classic Baked Alaska so it can be easier to eat.

Options that didn't work out so well

There are different kinds and styles of meringue: French, Italian and Swiss. The French meringue was with the egg whites that won’t fully cook and the result makes it coarse and foamy. The other two work as the eggs are fully cooked and the sugar is completely dissolved making it creamier, denser and more stable.

The Swiss version is easier to make as the basic method is to gently whisk the egg whites and sugar in a bowl and let it simmer over water until the entire mixture reaches 160° and then with the mixture till stiff peaks form. 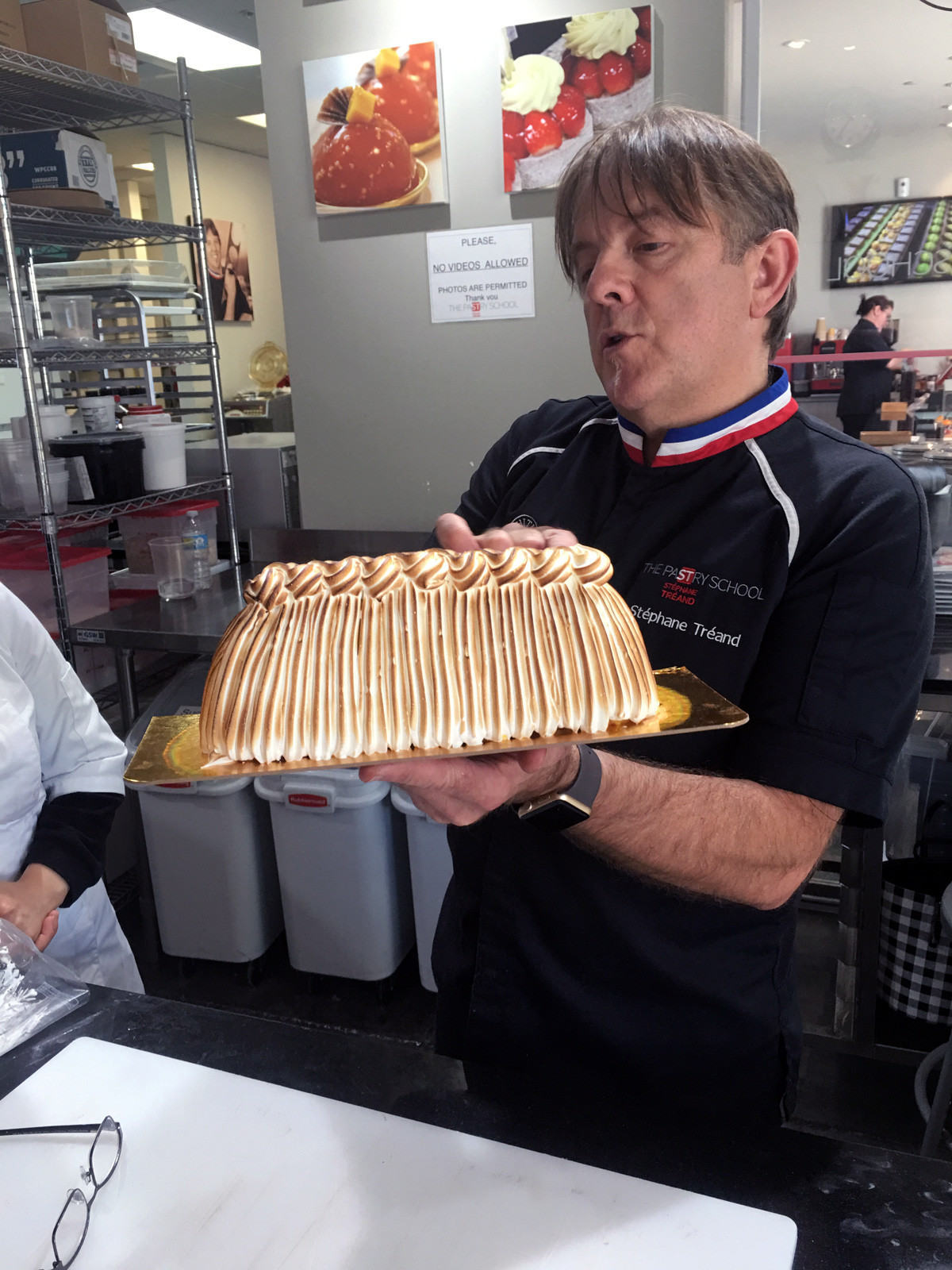 When it comes to the cake you can use a lean and airy genoise or a tender pound cake or even a brownie. The brownie with the meringue sounded like an interesting contrast. The basic brownie was baked in an 8 inch round pan and then packed with vanilla ice cream into a plastic wrap line bowl of the same diameter. Press the cool brownie into the ice cream and then put the entire thing into the freezer. Once it was firm one can unmold the cake and cover the entire surface with a thick layer of meringue. Then bake it at 500° for just a few minutes until the exterior is brown and crisp.

The chocolate flavor was very popular in the visual contrast of the brownie was great but with the combination of the ice cream and the thick coat of meringue, the entire thing was too sweet. Ice cream also can turn icy when you refreeze it before baking. It was a great idea but it didn't work out so well. 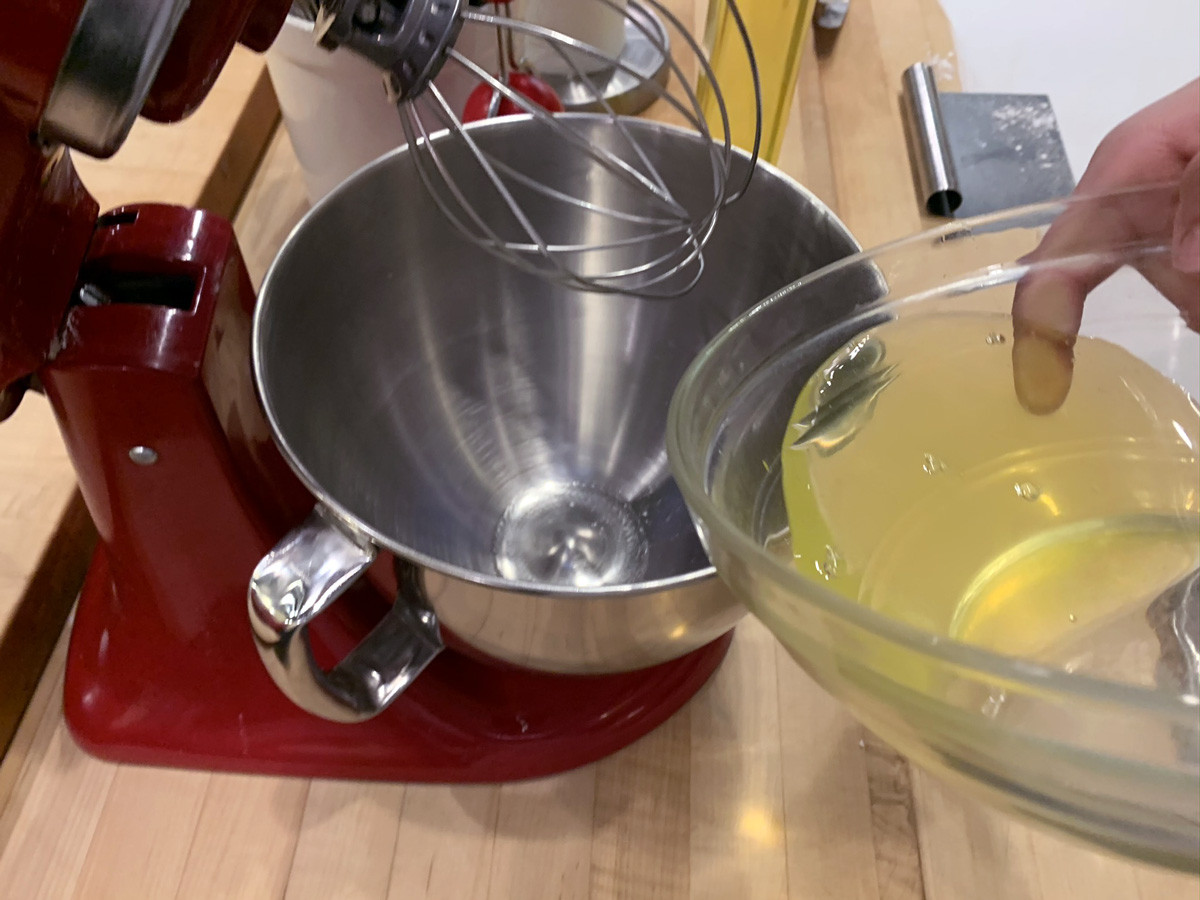 The lesson learned here is that the meringue coating isn’t just for aesthetics. It functions as the insulation. The meringue protects the ice cream from melting in the heat of the oven. 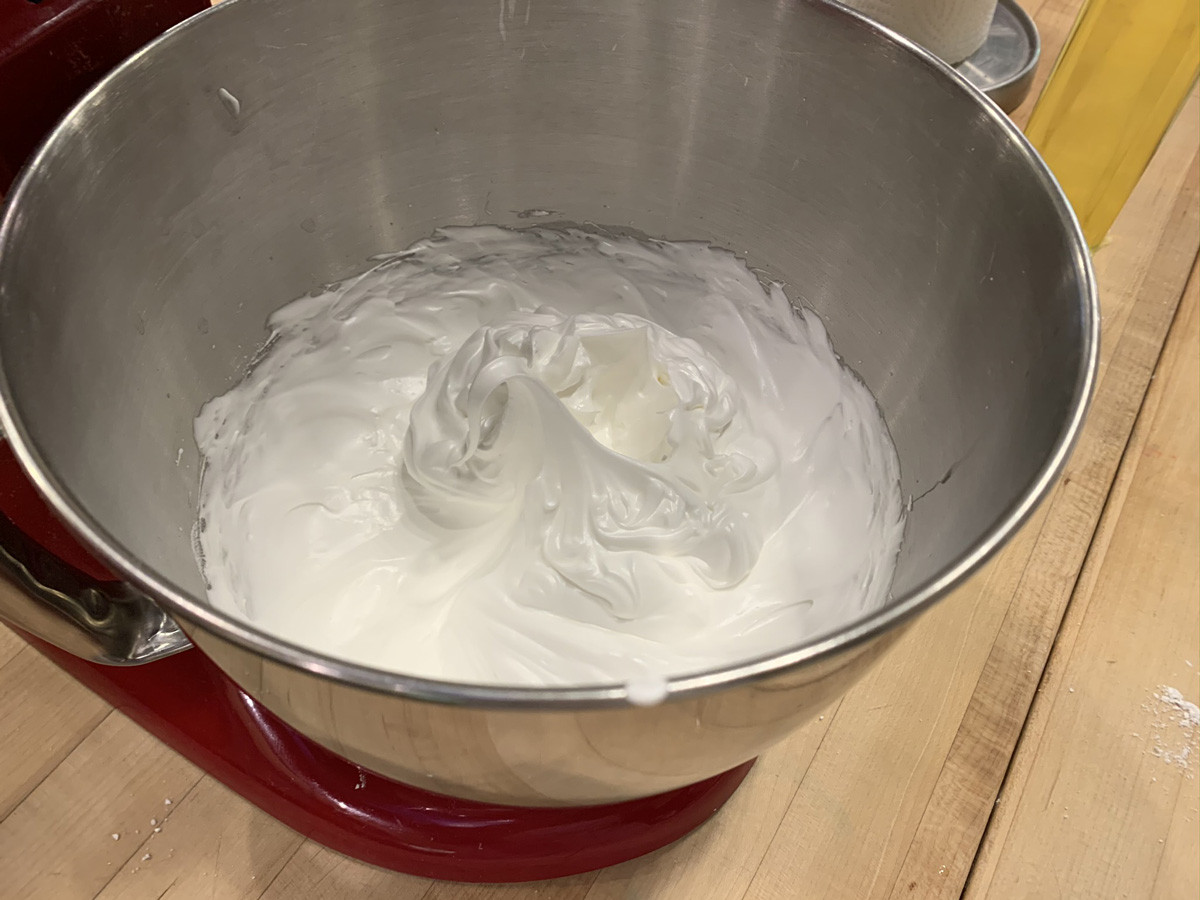 When the egg whites are beaten they form a phone or a liquid and that traps millions of tiny air bubbles and holds them together in a solid shape. Egg foams are great insulators because these air bubbles have few molecules and this conducts heat energy poorly. The more meringue, therefore the more insulation. 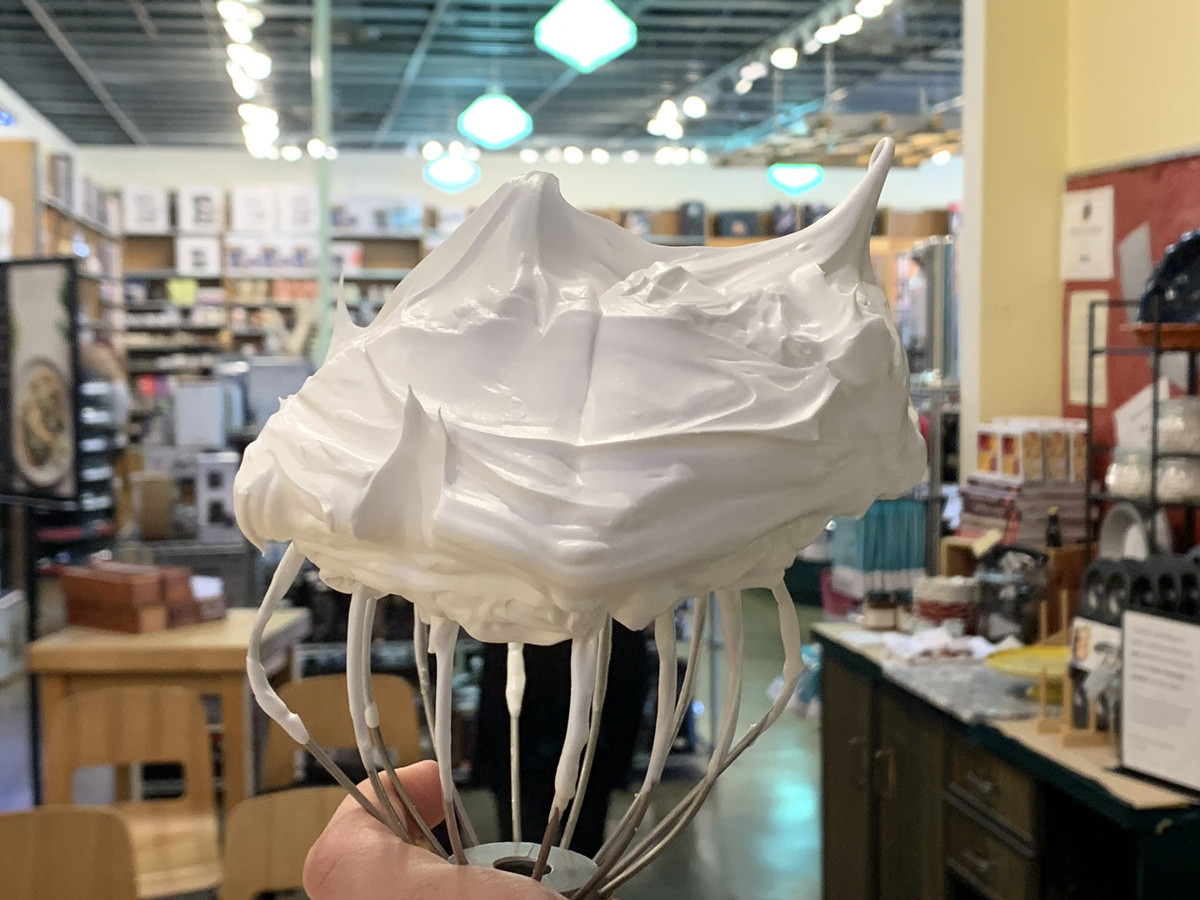 Looking exclusively to meringue for insulation was not the way to go. Cake is also able to insulate. Baked Alaska can also be completely encased in cake so this will allow one to cut down on the meringue but also keep the ice cream well insulated.

The changes needed to begin with the type of cake. The brownie idea was to suite and was not flexible enough to encase the ice cream. Switch it to a chiffon cake as it is made with whipped egg whites and sponge and is more flexible than the brownie. It also contains more air, which makes it a better insulator.

The chiffon cake then became my reengineered Baked Alaska. Do not line a bowl with the cake pieces instead turn the ice cream into a cylinder and wrap the cake around it.

Why it doesn't melt

How does ice cream wrapped in cake and covered with the meringue remain frozen solid for five minutes in a 500° oven? Again the meringue is full of the tiny air bubbles that provide insulation. Since the air bubbles contain fewer molecules, the heat transfer is very slow.

With this method there were no drips of melted ice cream and the slices were tidy and intact as the cross-section view was very interesting. 1/2 circle of ice cream surrounded by cake and enough meringue.

Now it was a question of the flavor. The brownie was a good match for the meringue so making the chiffon cake a chocolate chiffon cake with substituting cocoa was the next move.

For more complex flavors one can try tart sorbets versus plain vanilla ice cream. The flavors were good but it was to lean. One needs to use a premium ice cream that is rich and creamy such as coffee ice cream that has just the right hint of sweetness and bitterness.

Basically this Baked Alaska was an edible science project about insulation. In the end it is a showpiece dessert that needs to taste every bit as good as it looks.

To perfect the three components

Baked Alaska is often impressive but it's too sweet and hard to slice. So instead wrap the entire ice cream core in the cake and use less meringue.

All cakes can insulate the ice cream to heat in varying degrees. The genoise and chiffon cakes are the most effective because they insulate with air bubbles that keep the ice cream colder. They also are flexible so they can be wrapped around the ice cream. Chiffon was preferred as it has richer flavor and tender texture.

Finding a creamy meringue is easy to find and the Swiss meringue can be replaced with corn syrup versus sugar, which makes it less sweet.

Find a complex rich not too sweet frozen core.

The keys to success

Limit the amount of sweet meringue

Don't use the cake as your base. Completely surround ice cream with cake as it acts as an insulator and then you don't need to use as much meringue.

To eliminate ice crystals in the ice cream press 2 pints of ice cream together to form a cylinder and use that as a base.

For the ice cream cake:

While the list of ingredients doesn’t seem extensive, not all of us have say cream of tartar readily available at home. This is where Instacart can be very helpful. You no longer have to make a run to a grocery store as soon as you need something – Instacart personal shoppers will gladly do that for you in as little as an hour sometimes. 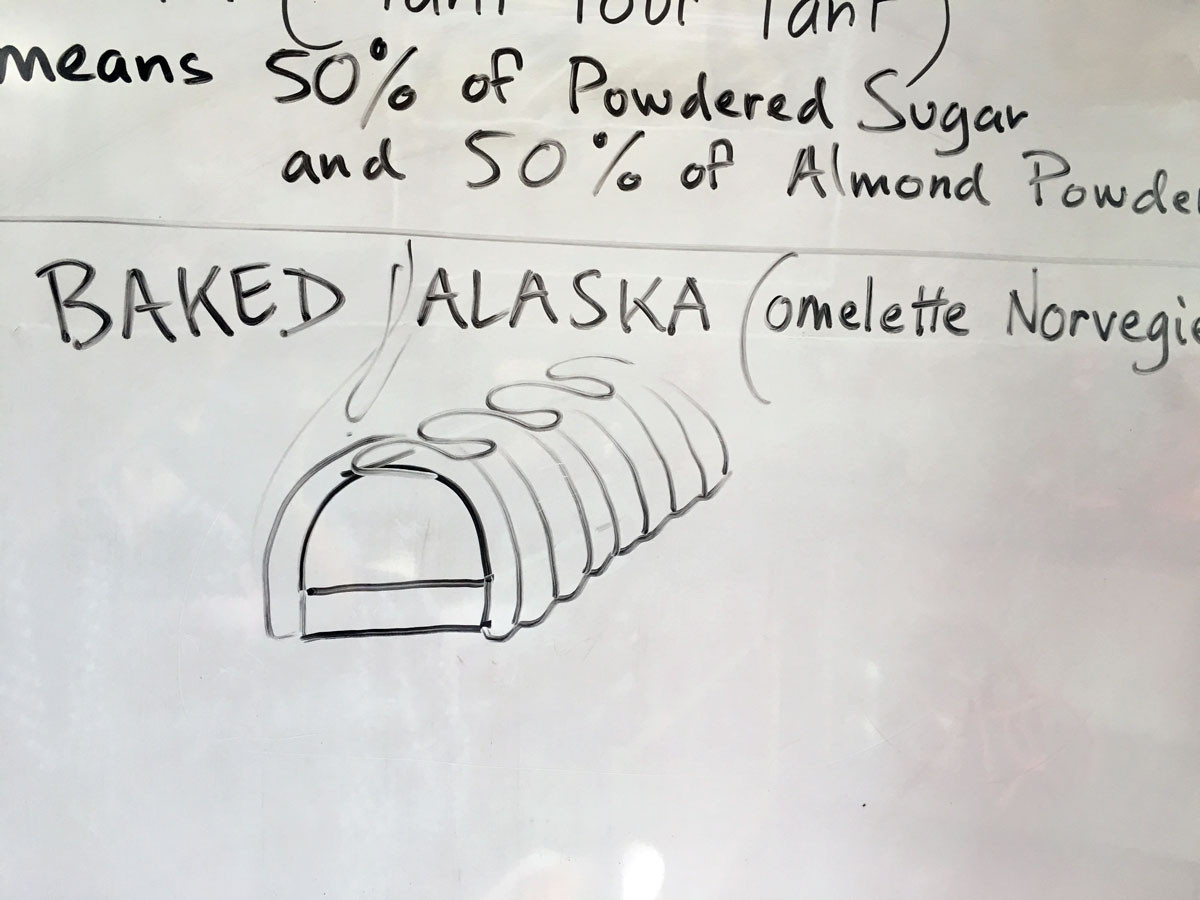 Remove the wrap and spread the remaining chocolate ice cream on top of the crumbs. Cut the pound cake into 1/2 inch thick slices. Cover the ice cream with the slices and trim as needed and you will use about two thirds of the cake. Cover with fresh plastic wrap and freeze until his firm, which will be about two hours to two days. 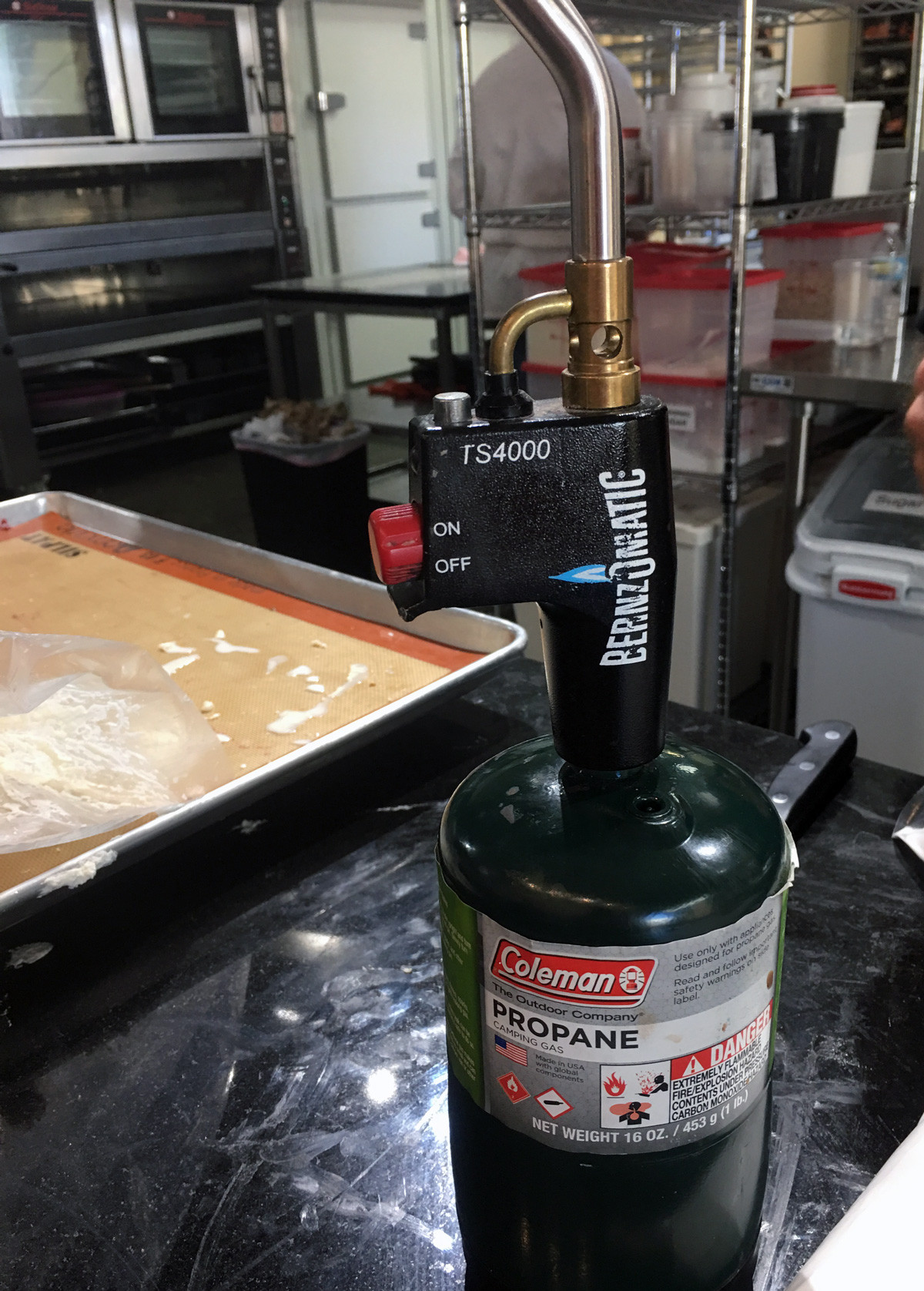 Make the meringue: with the egg whites and cream of tartar and a large bowl with the mixer on medium-high speed until it's foamy which will be about two minutes. Gradually beat in the sugar on high speed until the whites are glossy and have stiff peaks.

Remove the top layer of plastic wrap and invert the cake onto parchment lined baking sheet. You may need to let the cake stand until it slips out. Remove the rest of the plastic wrap and cover the ice cream completely with meringue. Make the dome-shaped top slightly thicker than the sides. Form swirling peaks in the meringue using the back of a spoon and freeze for three hours or more. 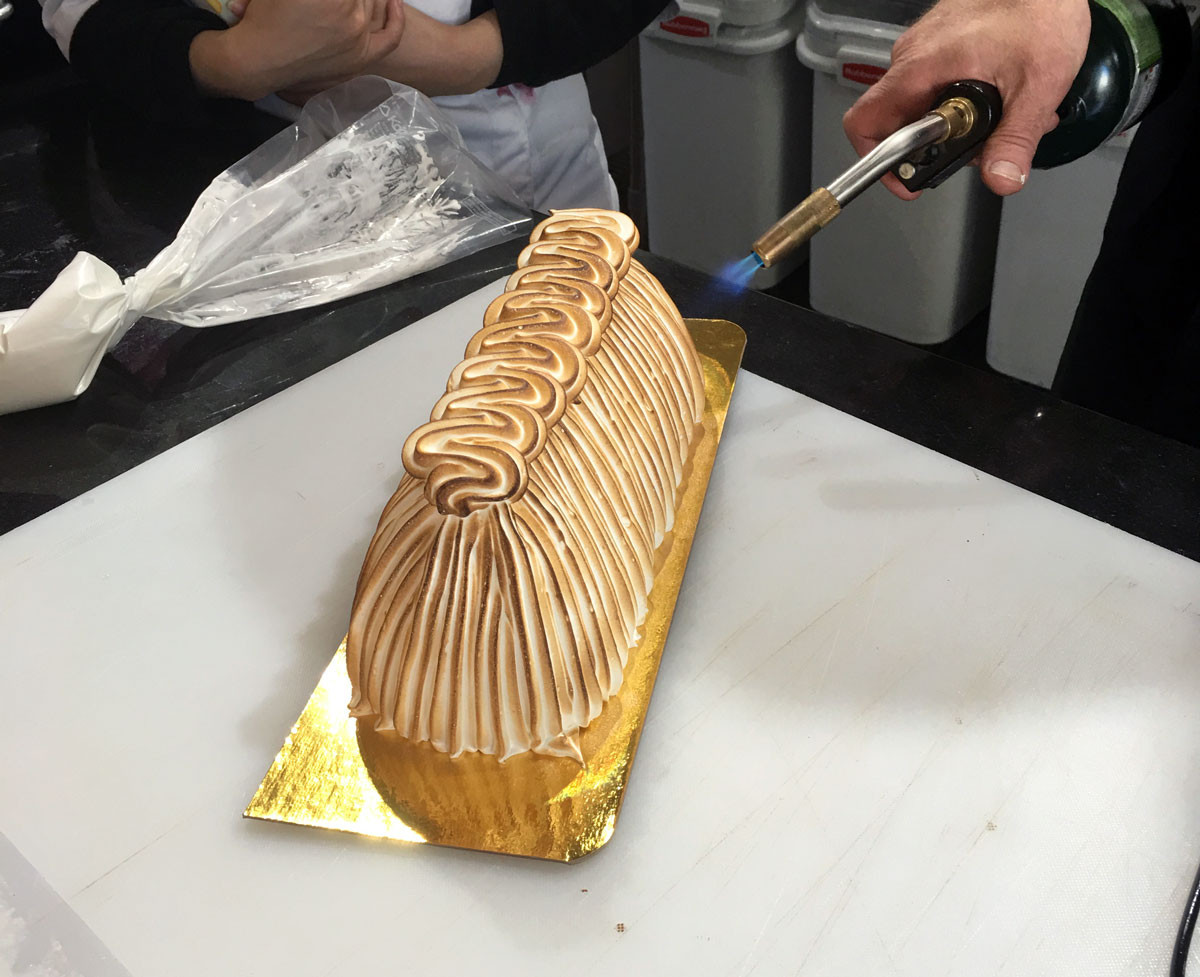 Preheat the oven to 500°. Bake the cake until the ring peaks are golden which will be about four minutes. One can also brown the meringue with a blowtorch. Let the cakes off at room temperature for 5 to 10 minutes before you slice it and don't forget to freeze any leftovers. 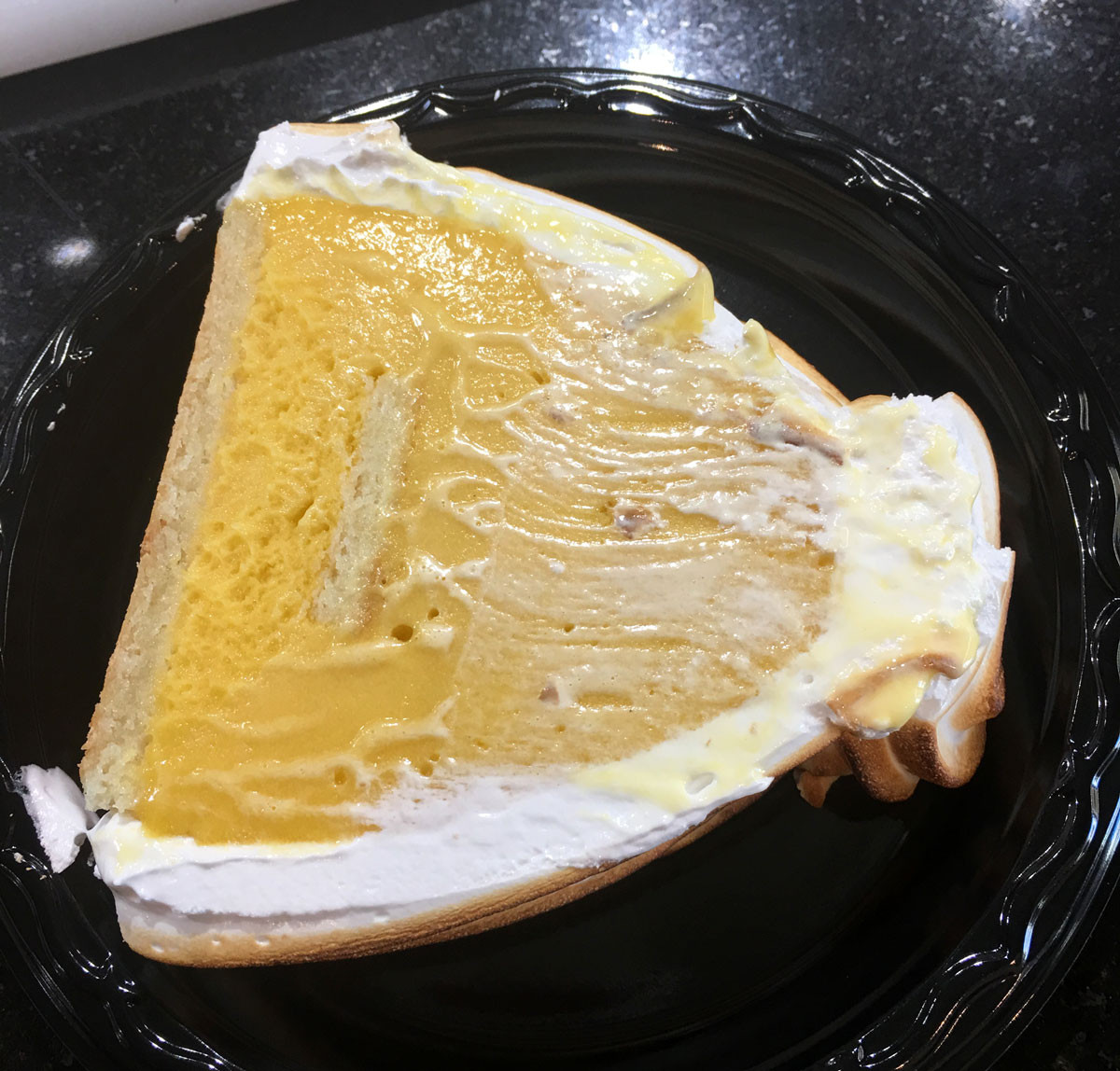