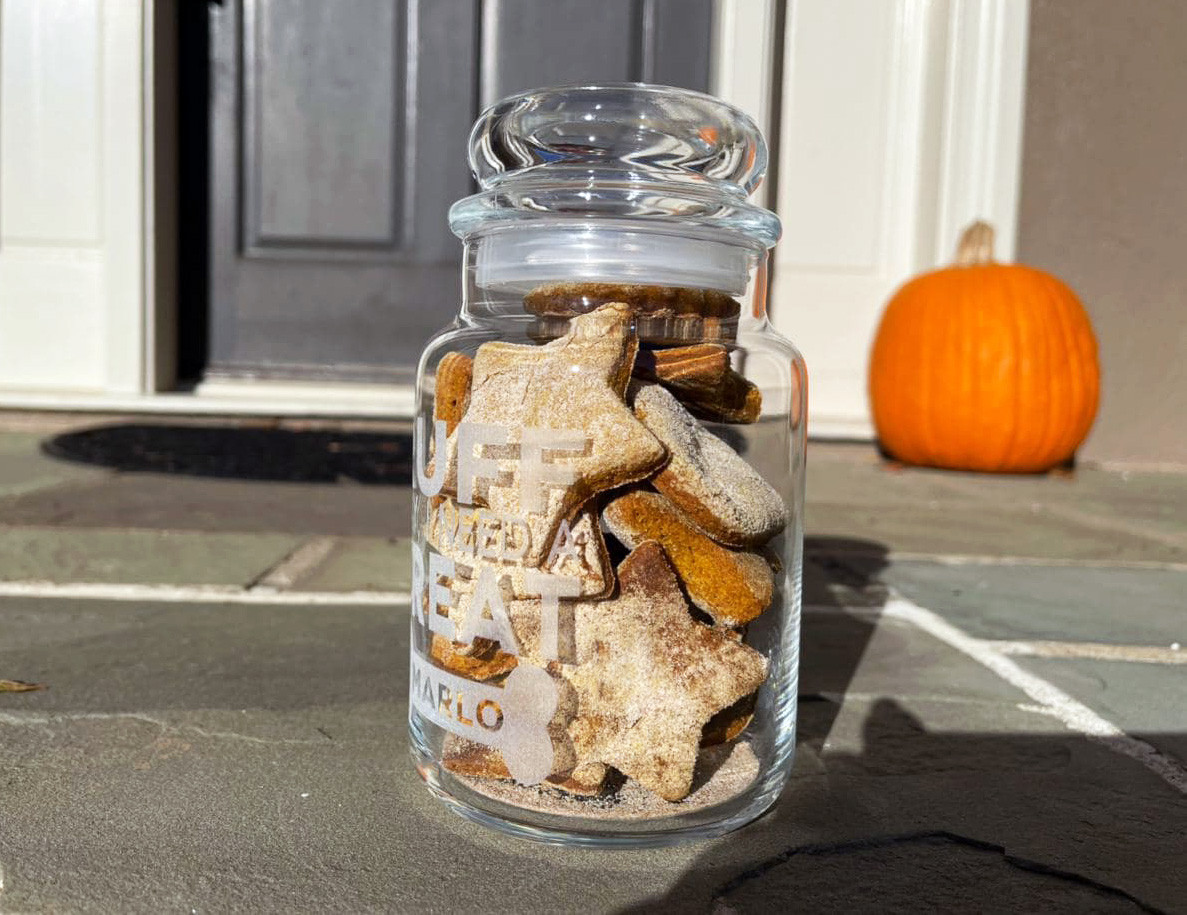 I don’t care what retailers and Facebook are telling me with their Christmas decorations and spirit in November – it’s still pumpkin time in my house and it shall remain that way until Thanksgiving. This means that I am still cooking and baking with pumpkin, and when I make my way to Starbucks - it’s still a pumpkin latte time!

If I get to enjoy all things pumpkin, why shouldn’t my dog, especially right before Thanksgiving? I started baking treats for him myself instead of buying them. First, I like the process. Second, I know what goes into them and make sure no extra or useless ingredient gets in. Third, my baking and wonderful smells encourage kids to lend me a hand in the kitchen, especially when we are talking about their beloved Marlo that gets treats. When I used to buy dog treats, it was always from Chewy.com because they have many choices for organic, natural, and various diet treats, which are the next best thing to home baked goodies.

Pumpkin puree is very healthy for dogs, and while Marlo won’t touch it with his food, he has nothing against baked biscuits with such puree. I think he knows when something is baking for him because he always hangs out around me ready for a test taste, pumpkin or not.

So without further ado, let’s get to those wonderful treats: 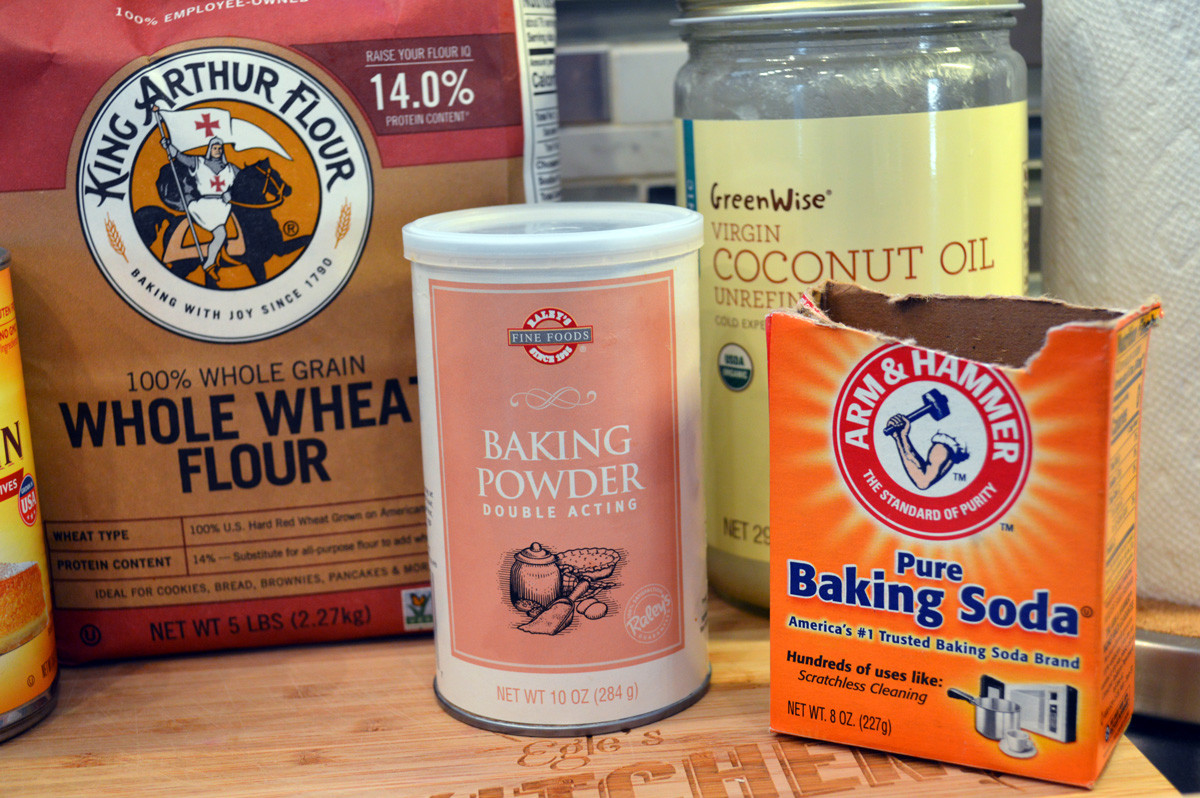 Start with preheating your oven to 350 degrees Fahrenheit. You want to make sure that biscuits cook for a while, but on low heat. If after 30 minutes they are not hard enough, add a few extra minutes. Line a cooking sheet with parchment paper and set it aside. 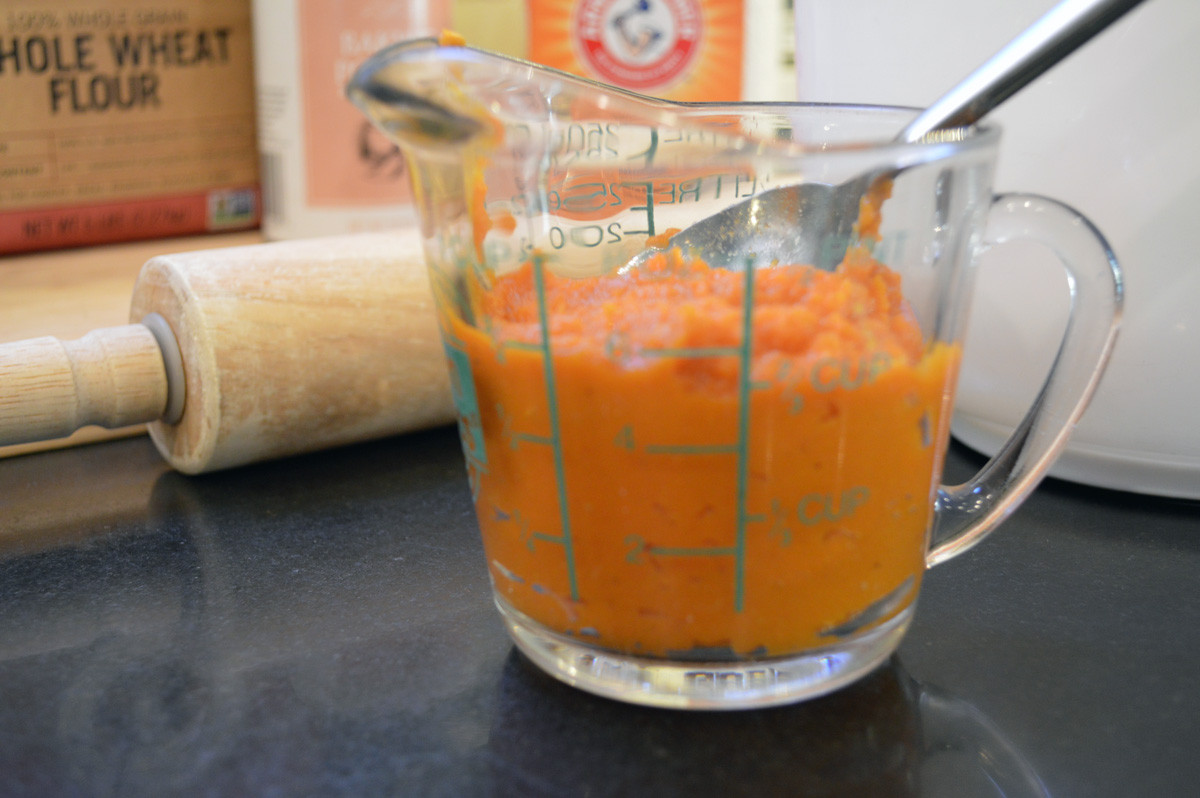 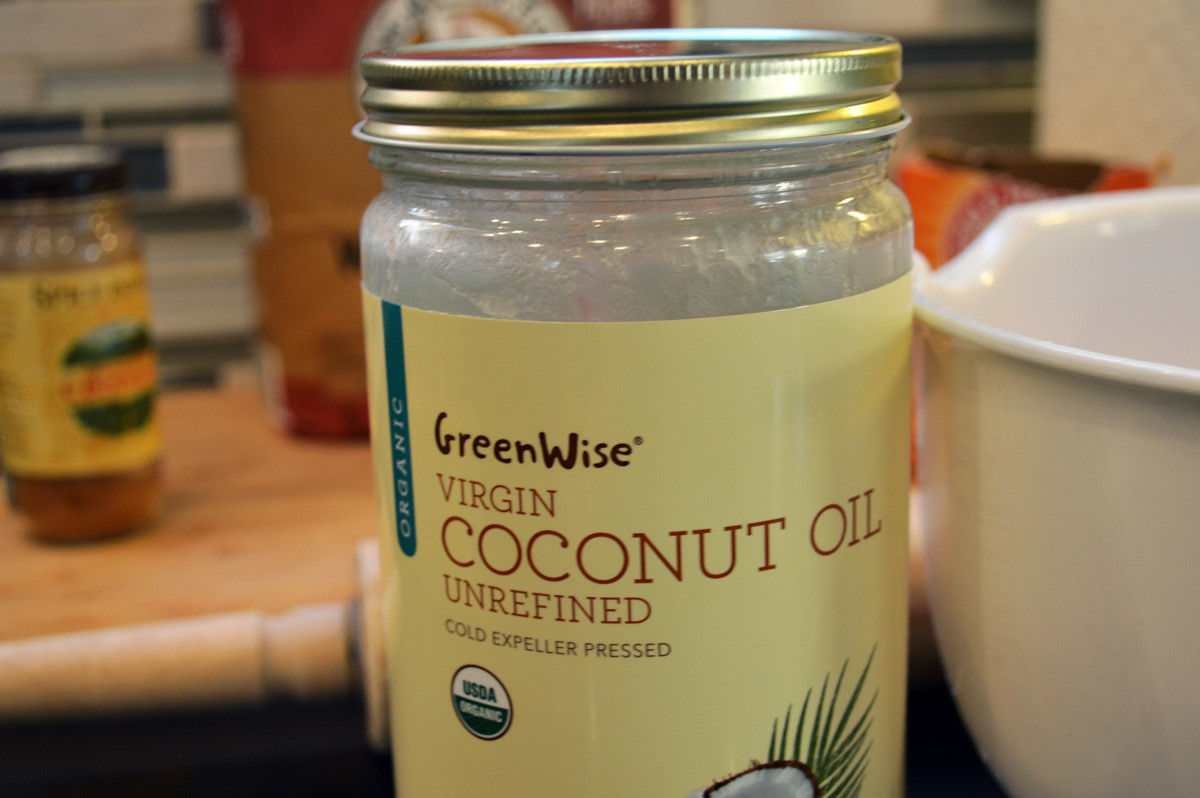 If you are making these treats when it’s not very hot, the oil might have to be heated to soften. 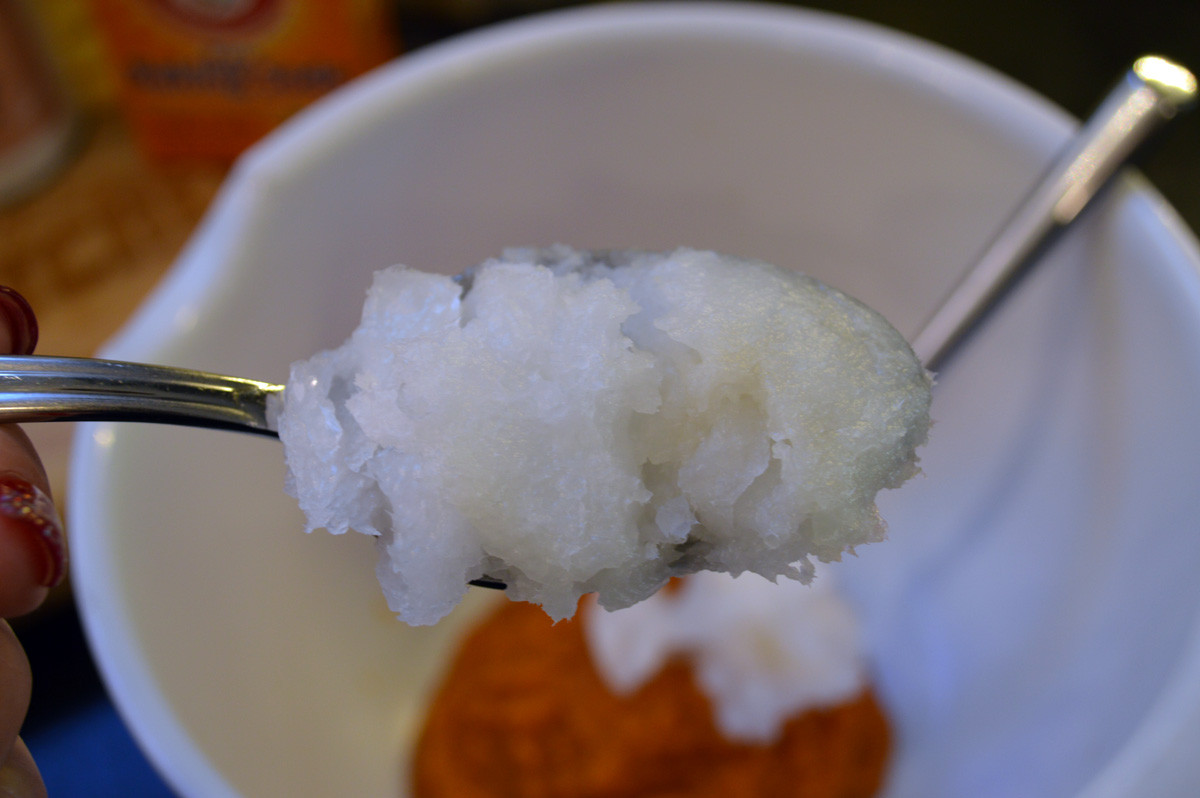 Mine was in semi-soft consistency and it worked great, so don’t stress out about the oil. Add 4 tablespoons of water as well. 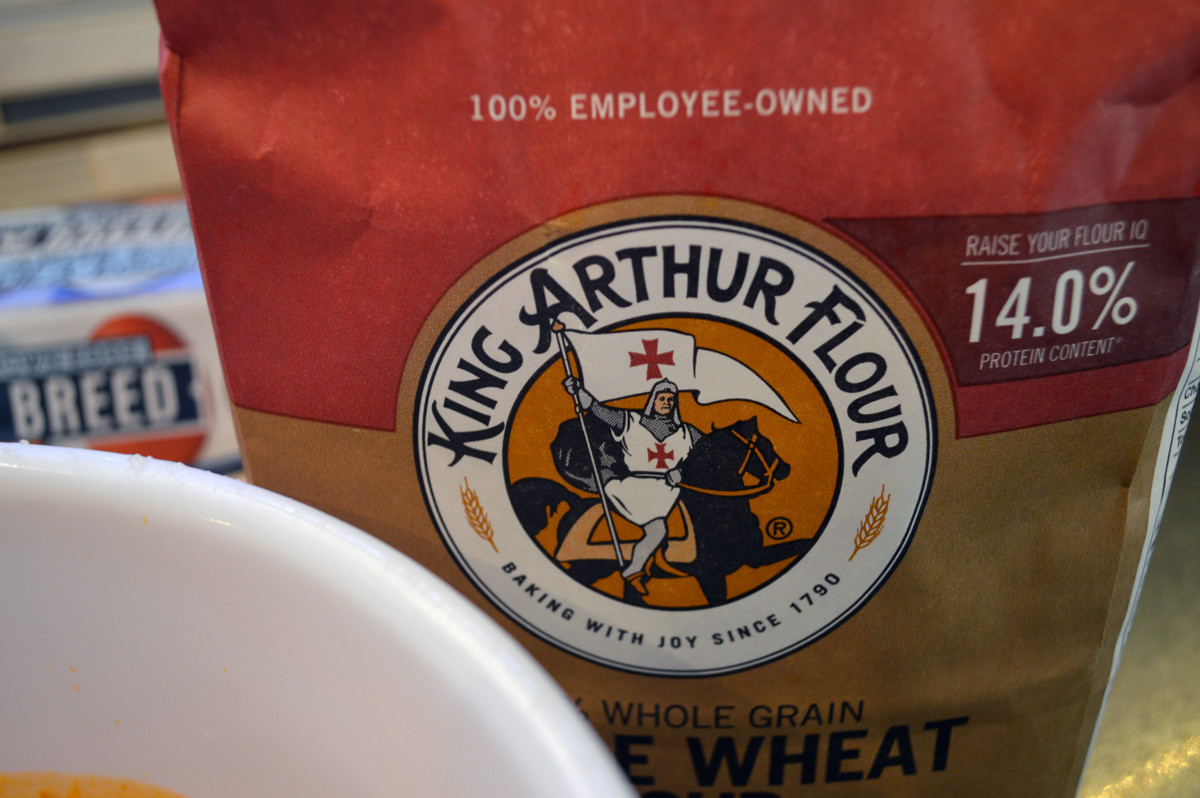 Next step is to add flour and continue mixing. Mixing might become a little tough when all flour is added, so you can consider using your hands instead of a spoon. 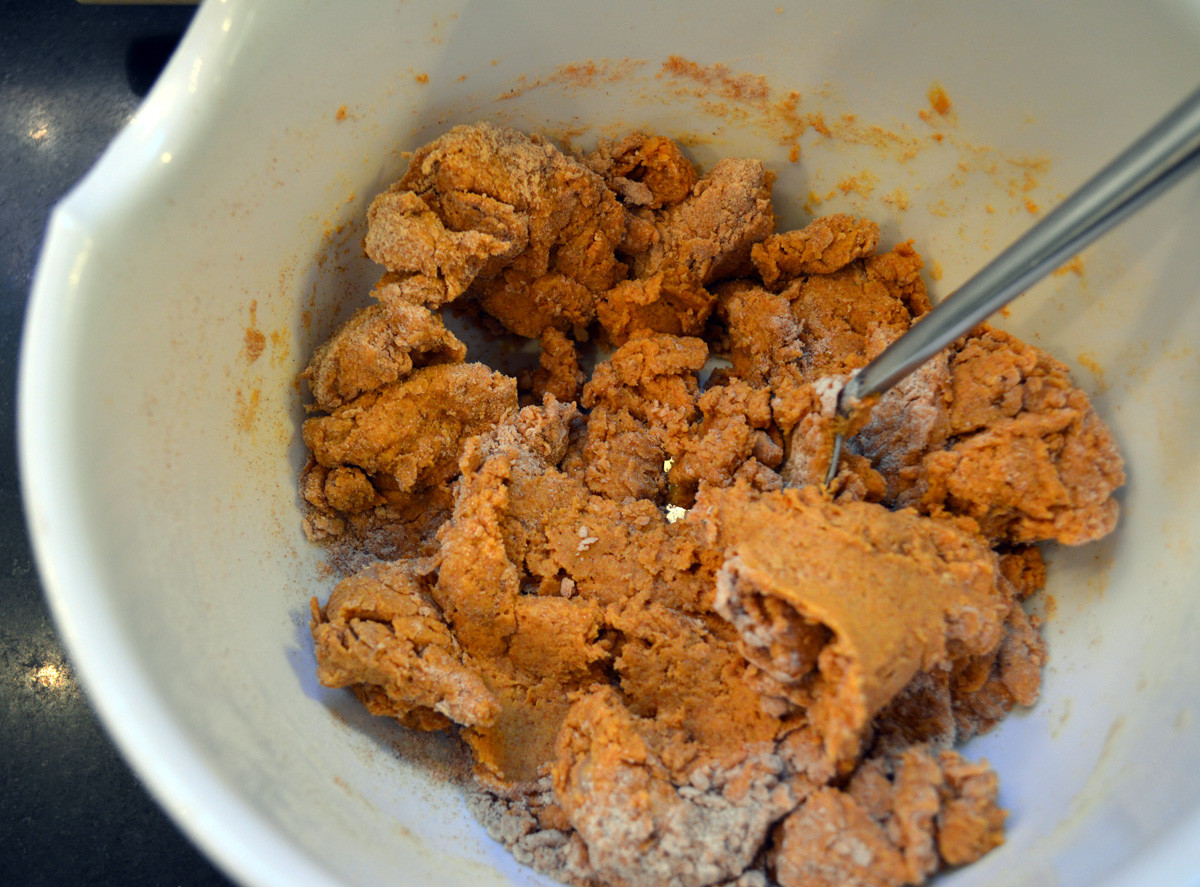 At this point also add cinnamon, baking soda, and baking powder. And yes, you read it right – both of them are needed. 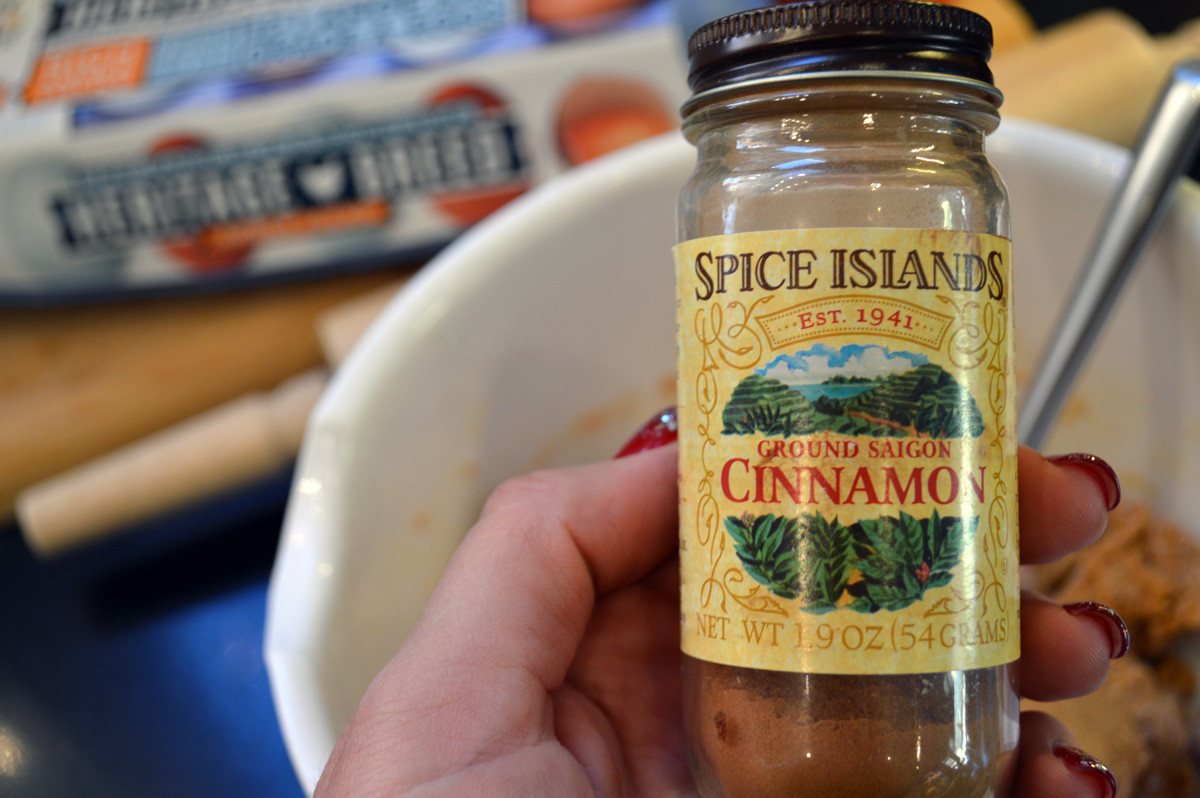 Final ingredient to go into this dough is an egg. It might make the dough a little sticky and soft. If that’s the case, you can add more flour if it seems to be too soft. 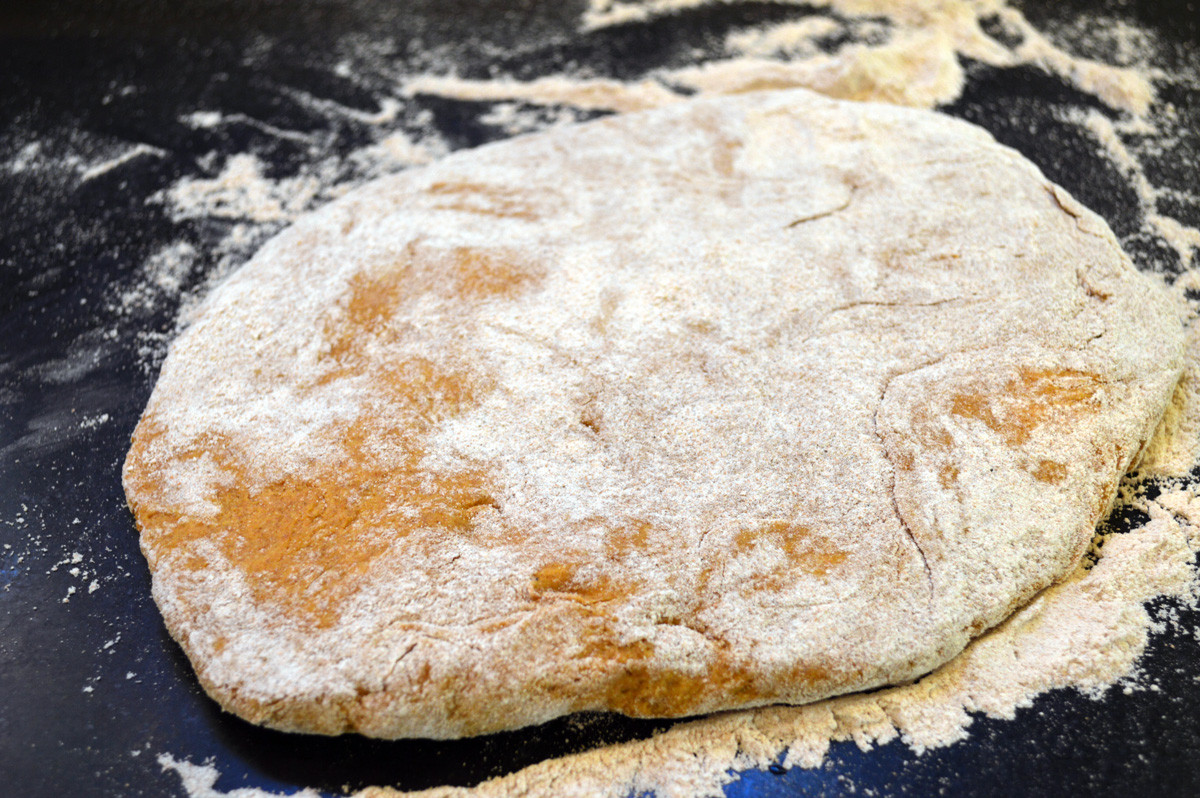 If you think it became too hard, add some water. Mine was perfect and didn’t need anything else. 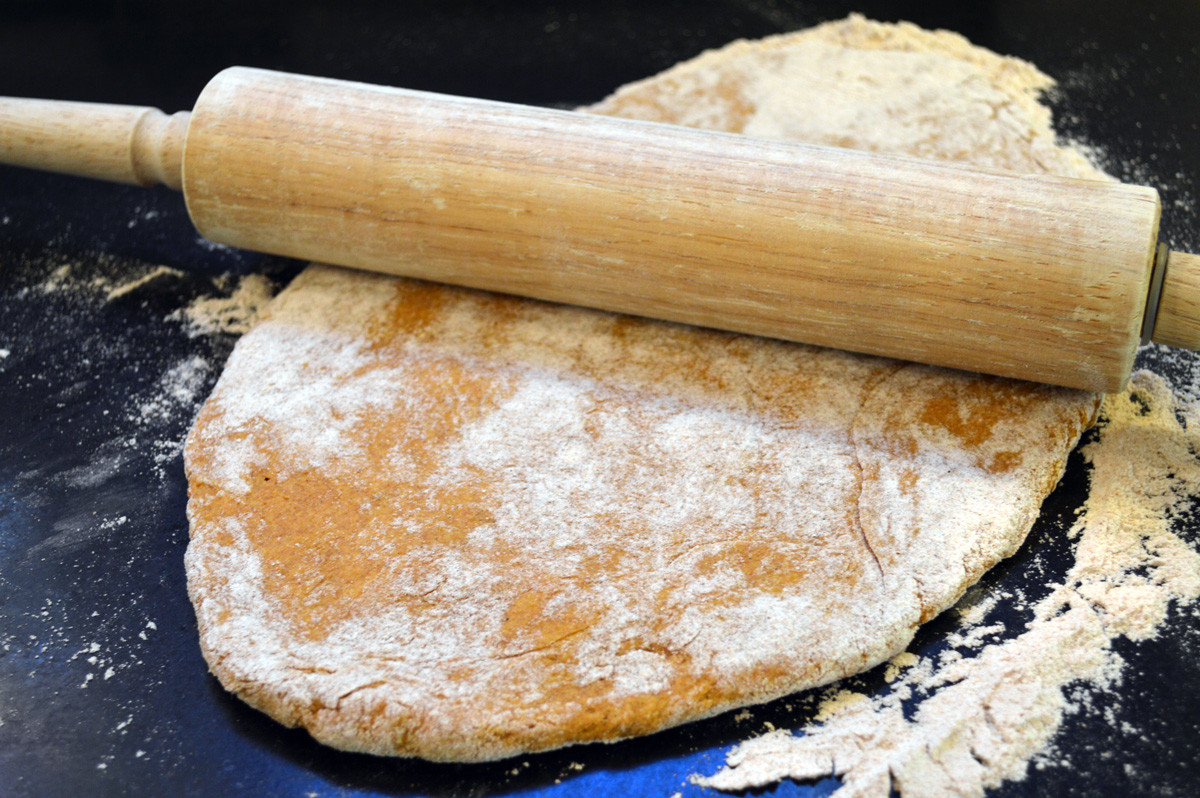 Once you’re done kneading, take it out of the bowl and place the dough on a floured surface. I really wanted to use my silicone shapes from Chewy, but this dough was just too hard for them, so I went with Christmas cookie cutters. 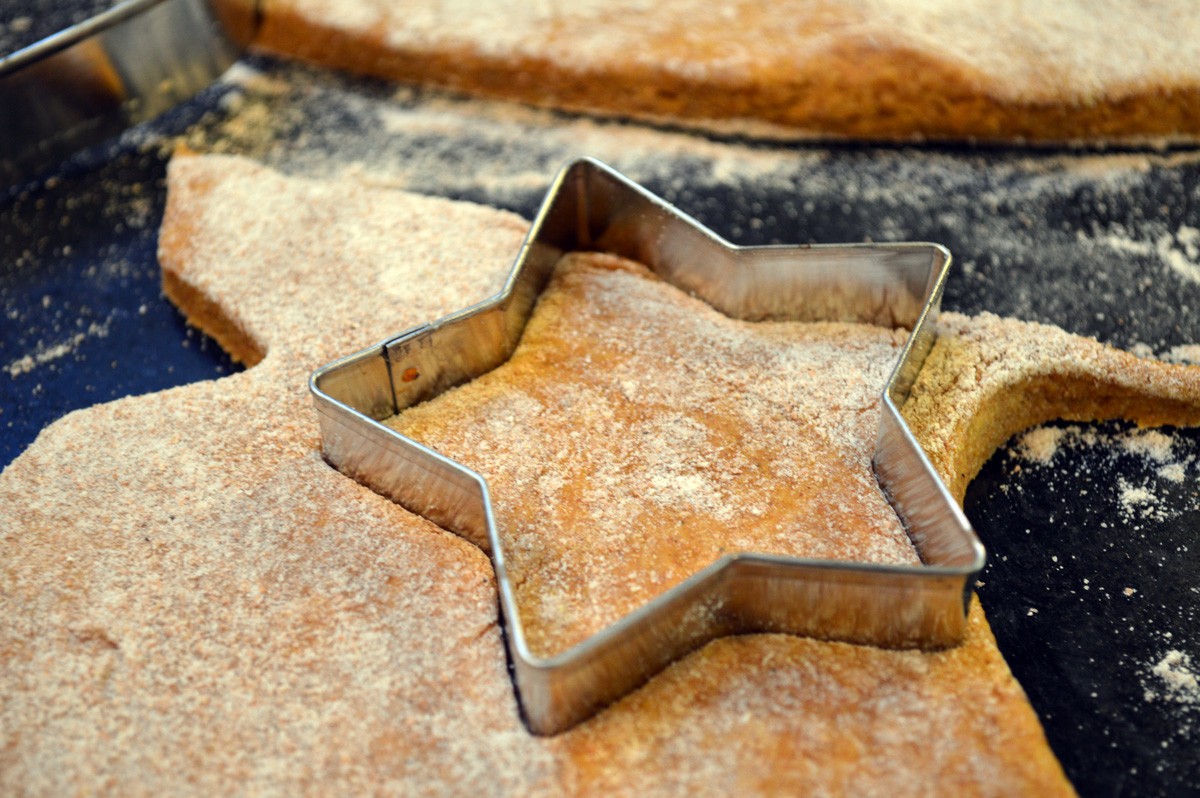 Yes, I just said myself that I don’t free Christmas vibes just yet, but the cookie cutter set had a circle, a heart, and a star, and who’s to say that those are not good for Thanksgiving? So I used them just fine, but will consider some pumpkin shaped cookie cutters for next year. 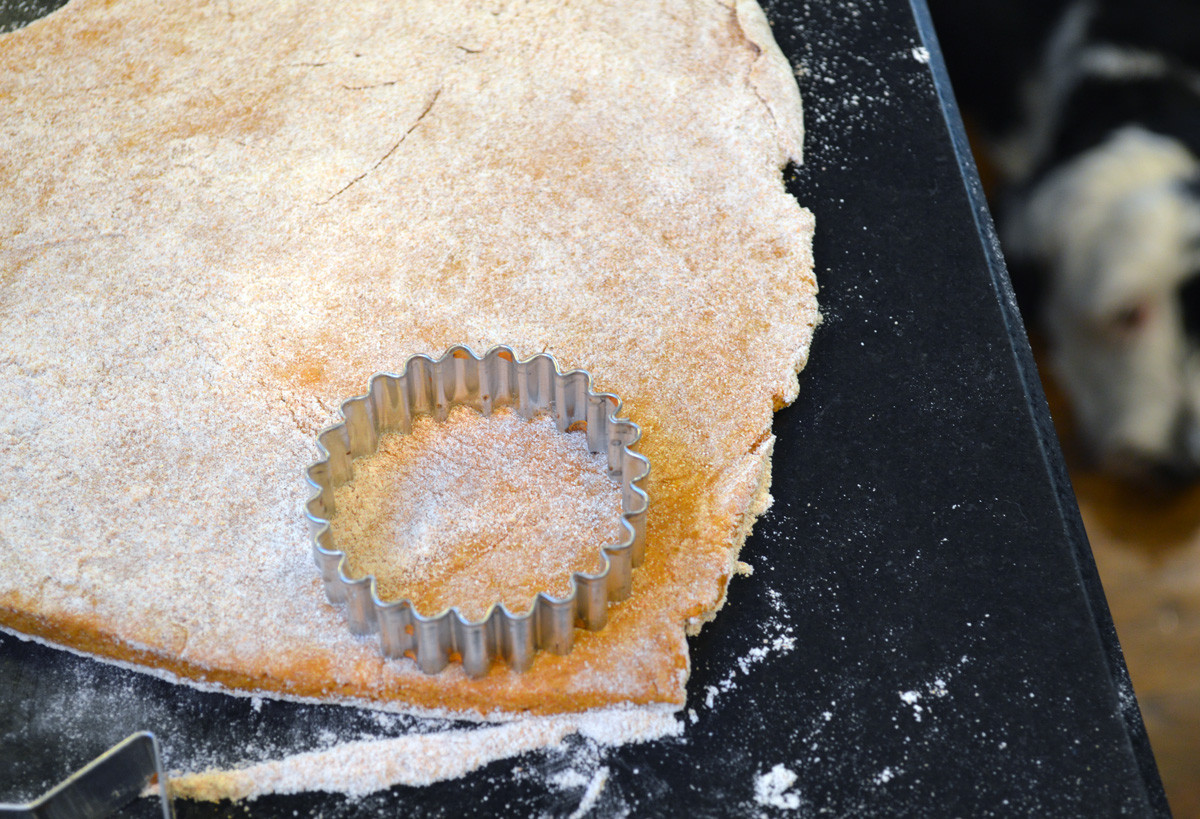 Roll your dough to about ¼ inch thickness and cut your biscuits to whatever shapes you desire. Then place them on a cookie sheet. Leave some space between them, but not too much because they don’t rise that much. 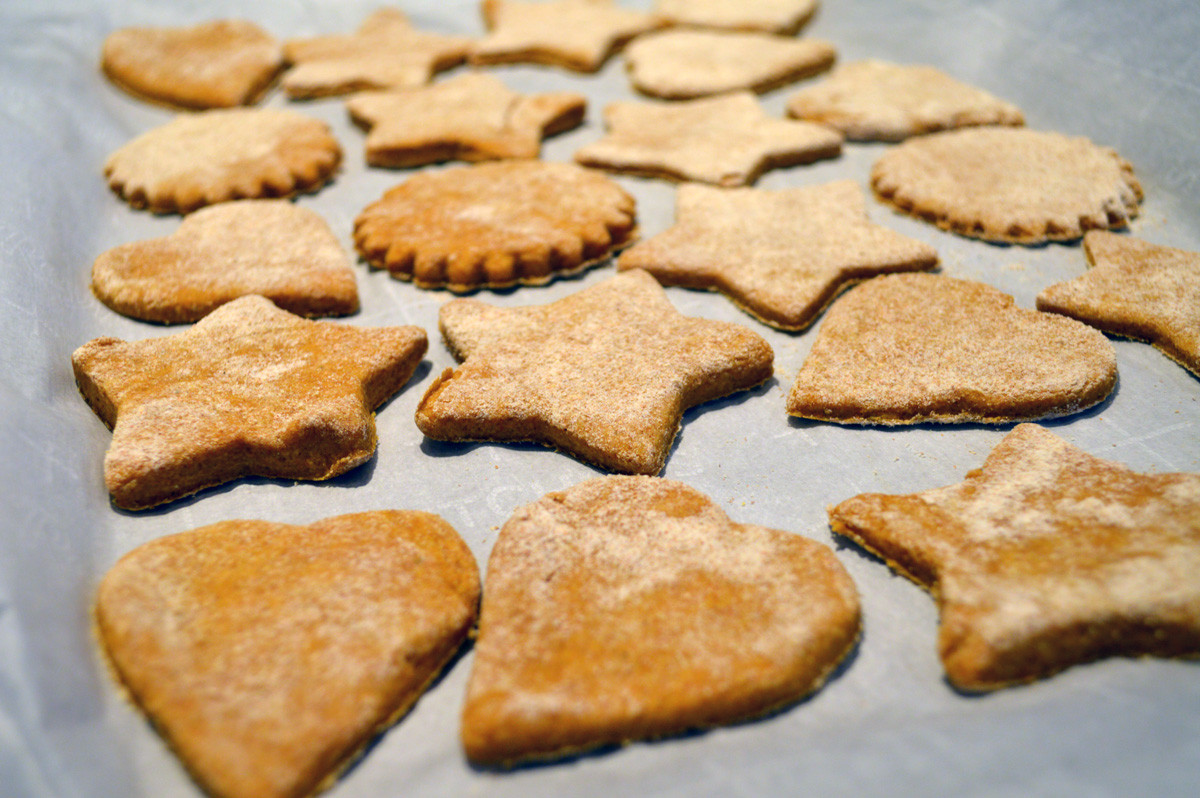 My biscuits baked for 30 minutes, but you might have to adjust the time based on your oven. After they are done, take them out and let them cool off completely. In the meantime Fido will probably be drooling right beside that oven, so be ready for it. 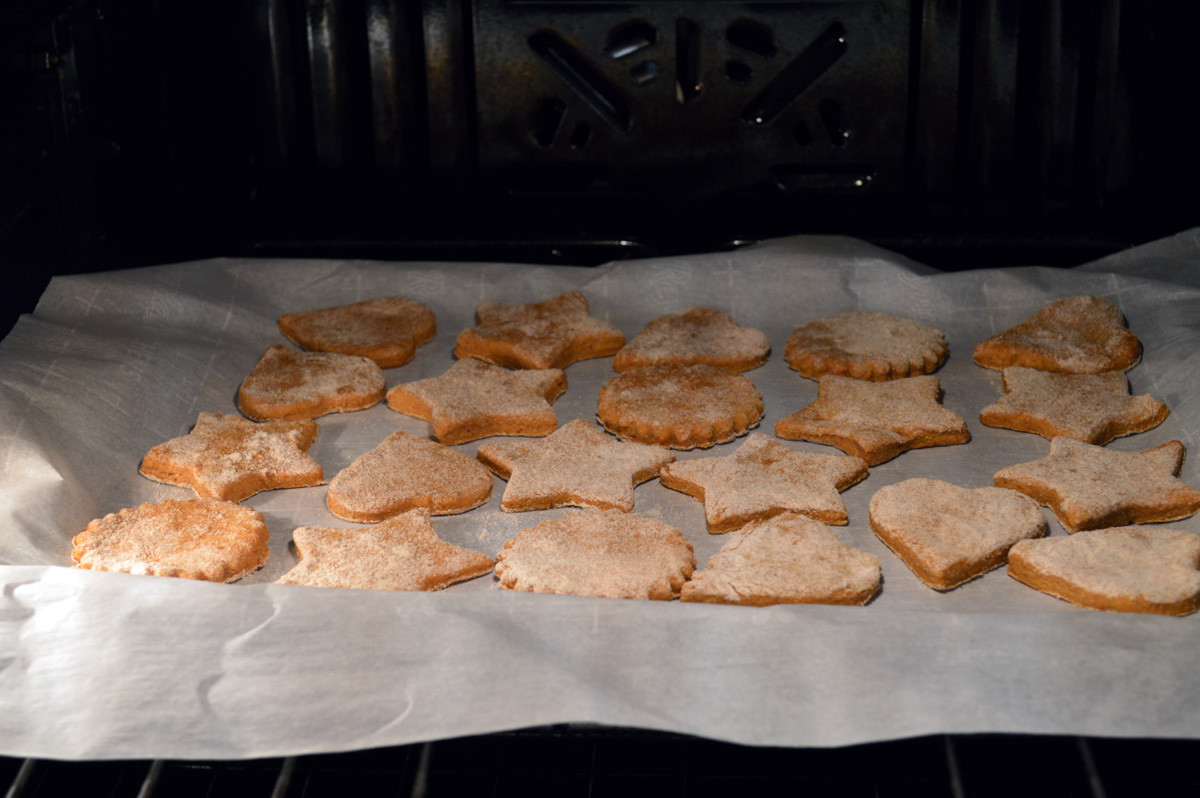 Marlo got very excited when he received a confirmation that those fragrant cookies were indeed for him – he started drooling and jumping so much that I had to take the show outside. He sure was one happy pup and I bet he can’t wait for some Christmas cooking in this house!

You can store the cookies for up to 5 days in an airtight container. I use a glass jar from Personalization Mall with Marlo’s name. After that I would freeze them. Enjoy and let your dog enjoy the fall as much as you do!

Apple season is upon us and since we made our annual apple picking trip this weekend. While I was waiting treats from Chewy, I decided to bake my own.

I am done looking for healthy dog treats at pet stores. I tried many and while Marlo likes them all, I don't after reading the labels.