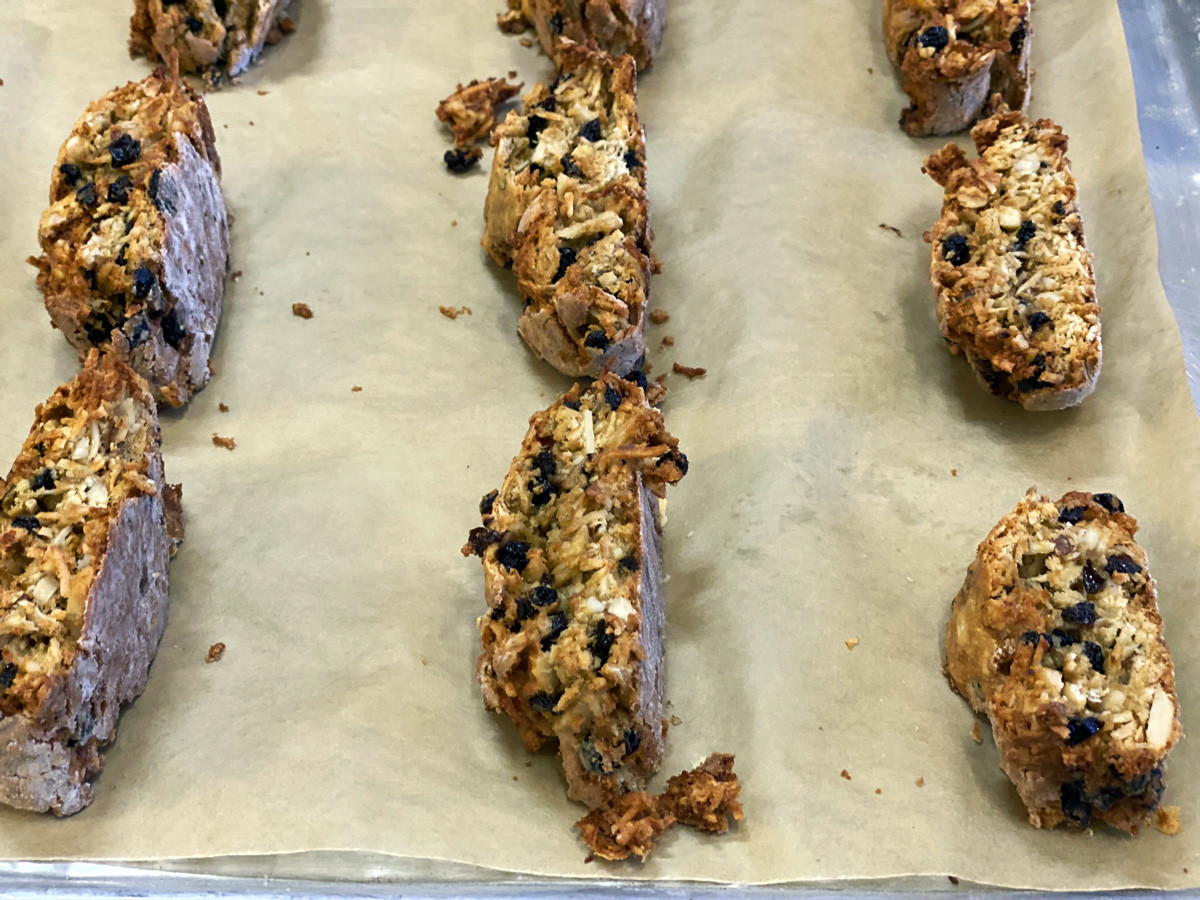 It’s worth mentioning a few things about three of the ingredients. First, the King Arthur Unbleached All-Purpose Flour - we recommend using this particular brand because you can buy it in all natural food grocery stores and it is better than many other brands. This flour is milled from hard red wheat grown in America, is unbleached, unbromated, and works for a variety of recipes, from delicate pastries to breads all while offering superior health benefits. 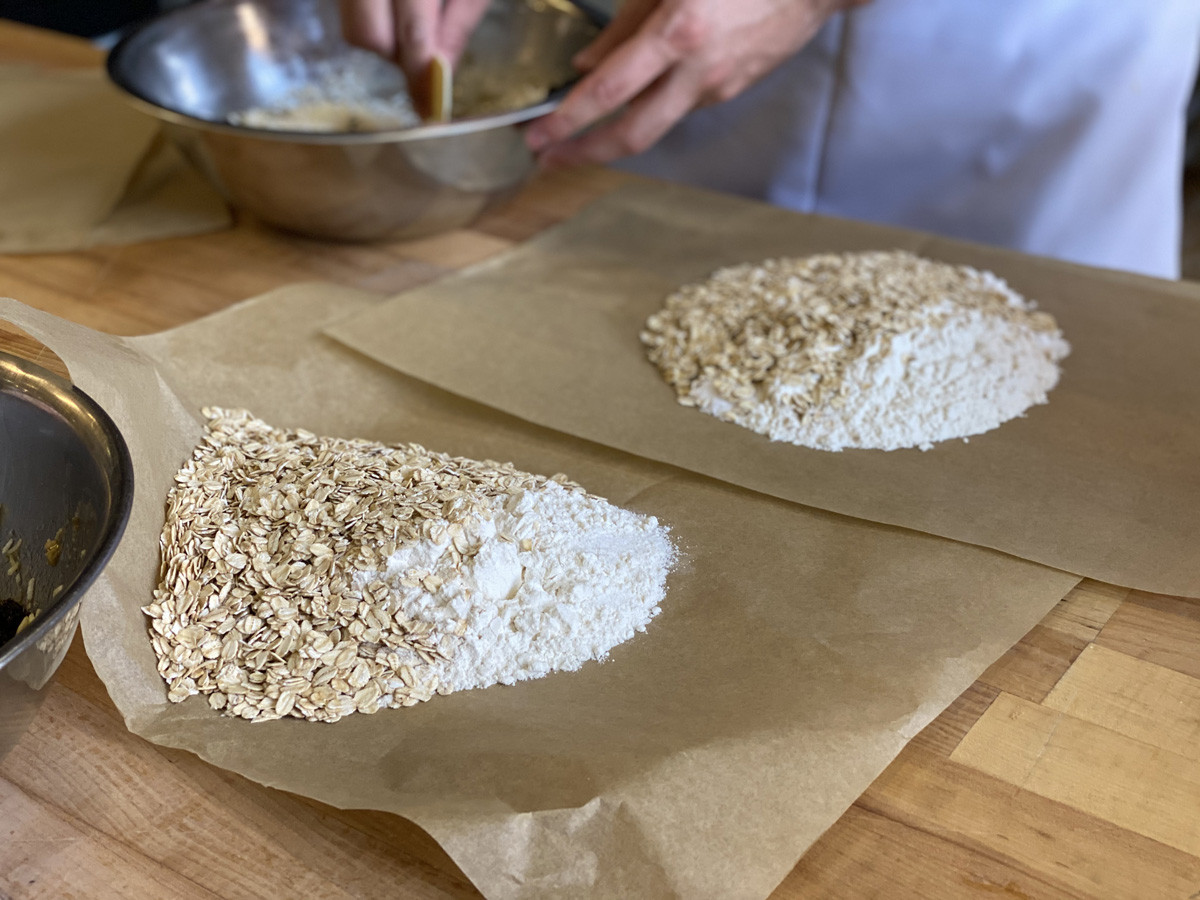 Ghee is another suggestion that we would like to make. We prefer ghee over sweet milk butter because it is a healthier version of that same butter butter and can be used to replace butters and oils. Ghee is made from regular butter, which separates into liquids and milk solids while cooking. Afterwards milk solids are removed and only liquid butter is considered ghee. It has less lactose than butter and is widely used in Asian cooking. It can become liquefied in warmer temperature and then solidify again, like cold-pressed coconut oil. 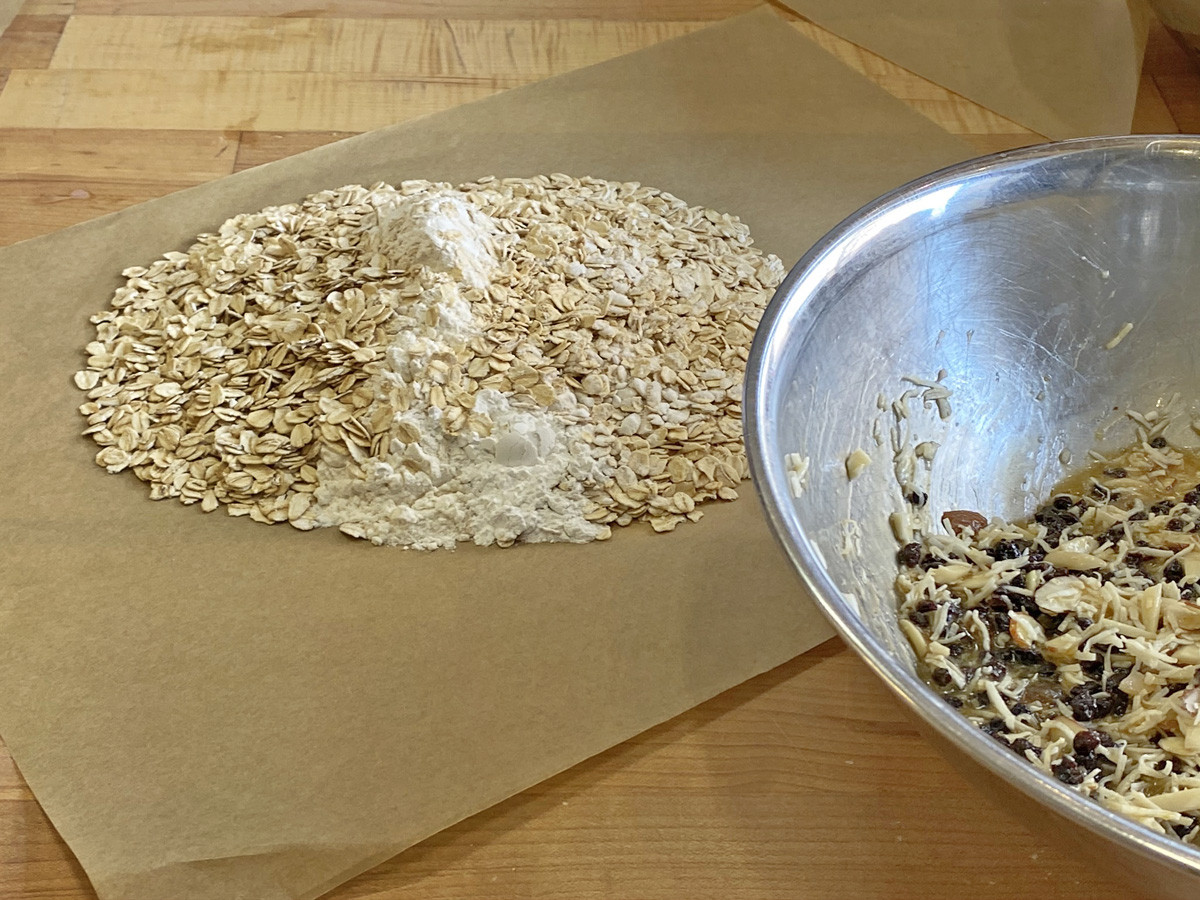 Finally, organic sulfur dioxide-free dried fruit is our go-to choice instead of regular dried fruit, which often includes added sugars and harmful chemicals when not organic. Unsulfured fruit does not contain preservatives and is often sun-dried, making food as nature intended.

Using such organic ingredients will improve the taste of our biscotti, which will serve as a healthy snack made with wholesome products. All those products can be found in organic and natural food stores or ordered online.

How to make Organic Granola Biscotti:

Before you start working with ingredients, turn the oven on and preheat it to 325 degrees Fahrenheit. Low temperature is needed for even and slow cooking. Place a piece of parchment sheet inside the baking sheet and set aside until needed. Don’t oil it as biscotti don’t really stick to the paper. 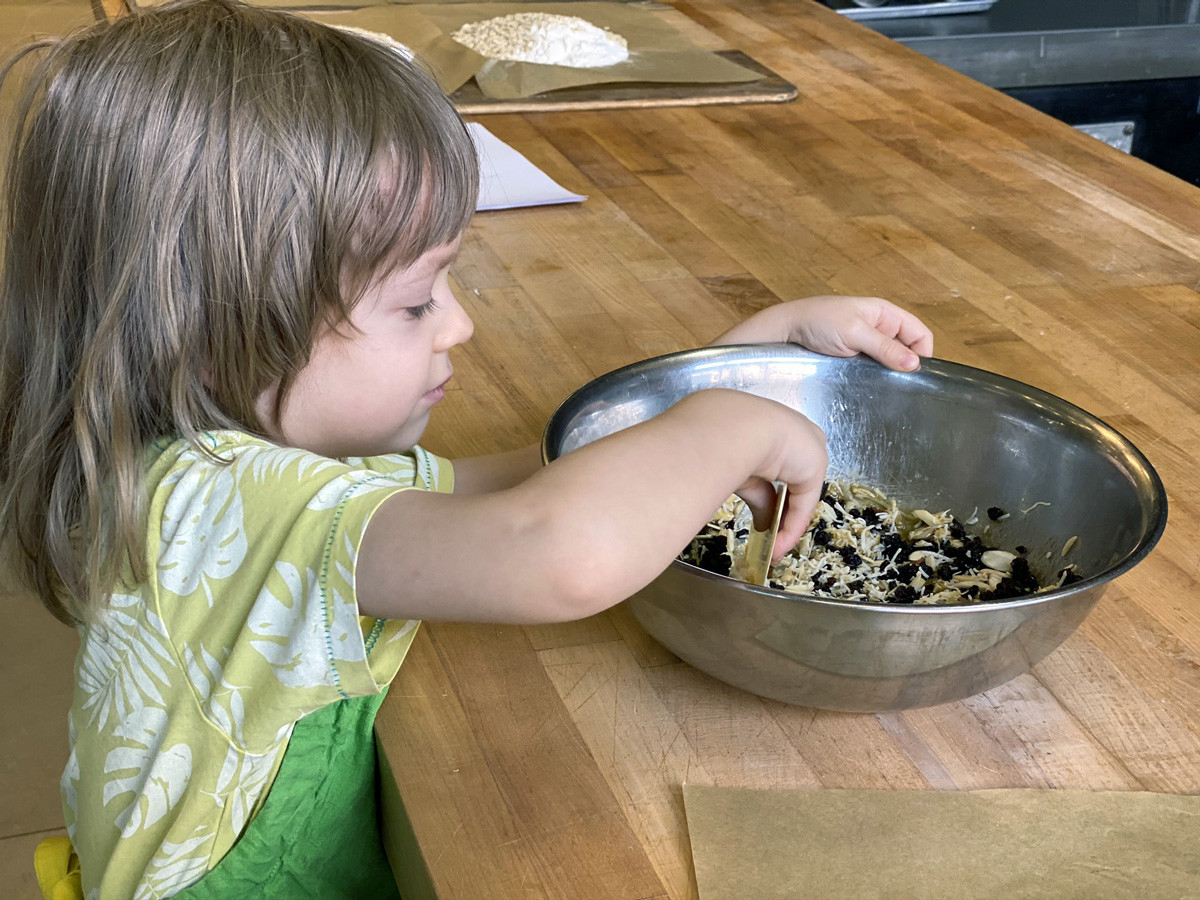 Take a small bowl and combine organic flour, oats, baking powder, baking soda, and salt, whisk everything gently until thoroughly combined. Take a separate larger bowl and whisk together the melted butter or ghee and sugars or sugar substitutes. 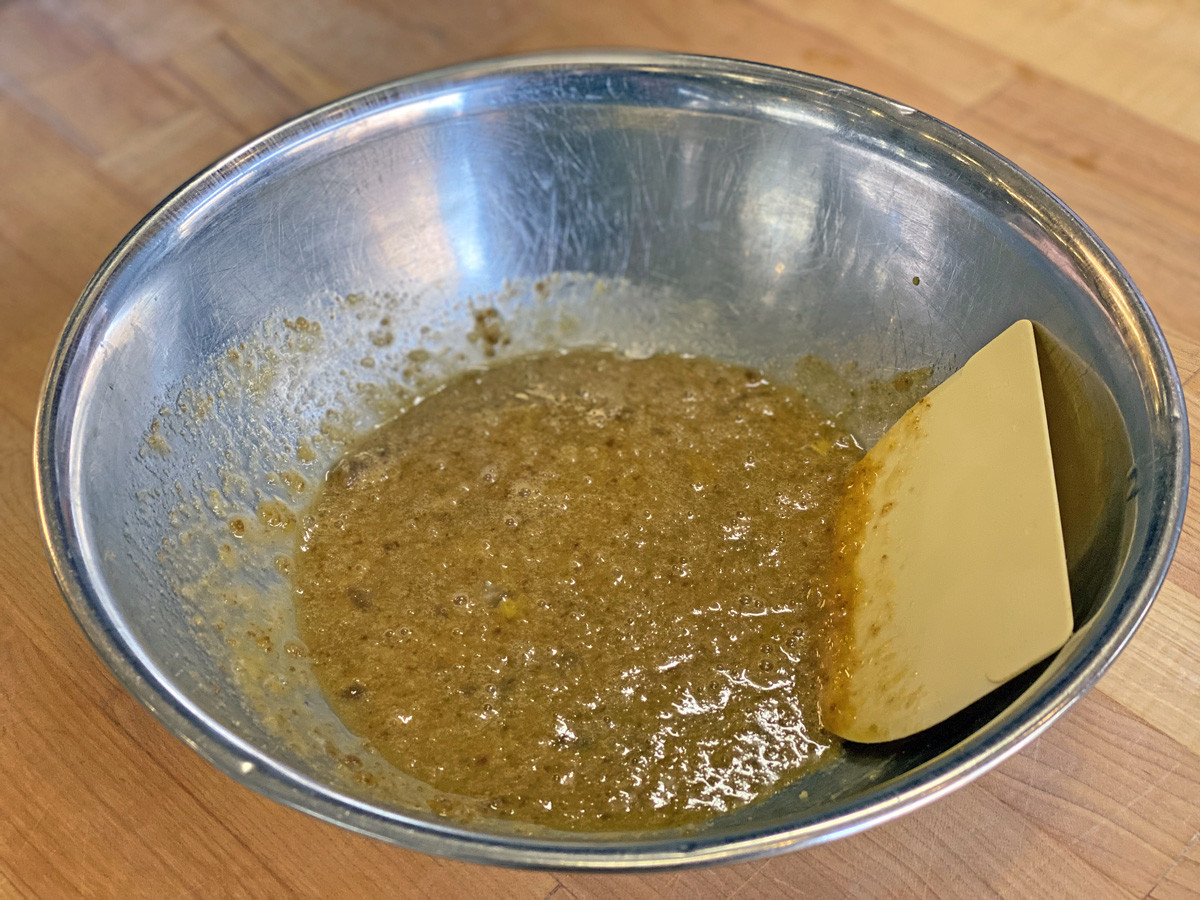 Then add vanilla extract or paste and organic eggs, continue stirring. Finally, add the mixture of dry ingredients, then put almonds, coconut, and dried fruit to make a pretty hard batter that doesn’t stick to hands and keeps shape. 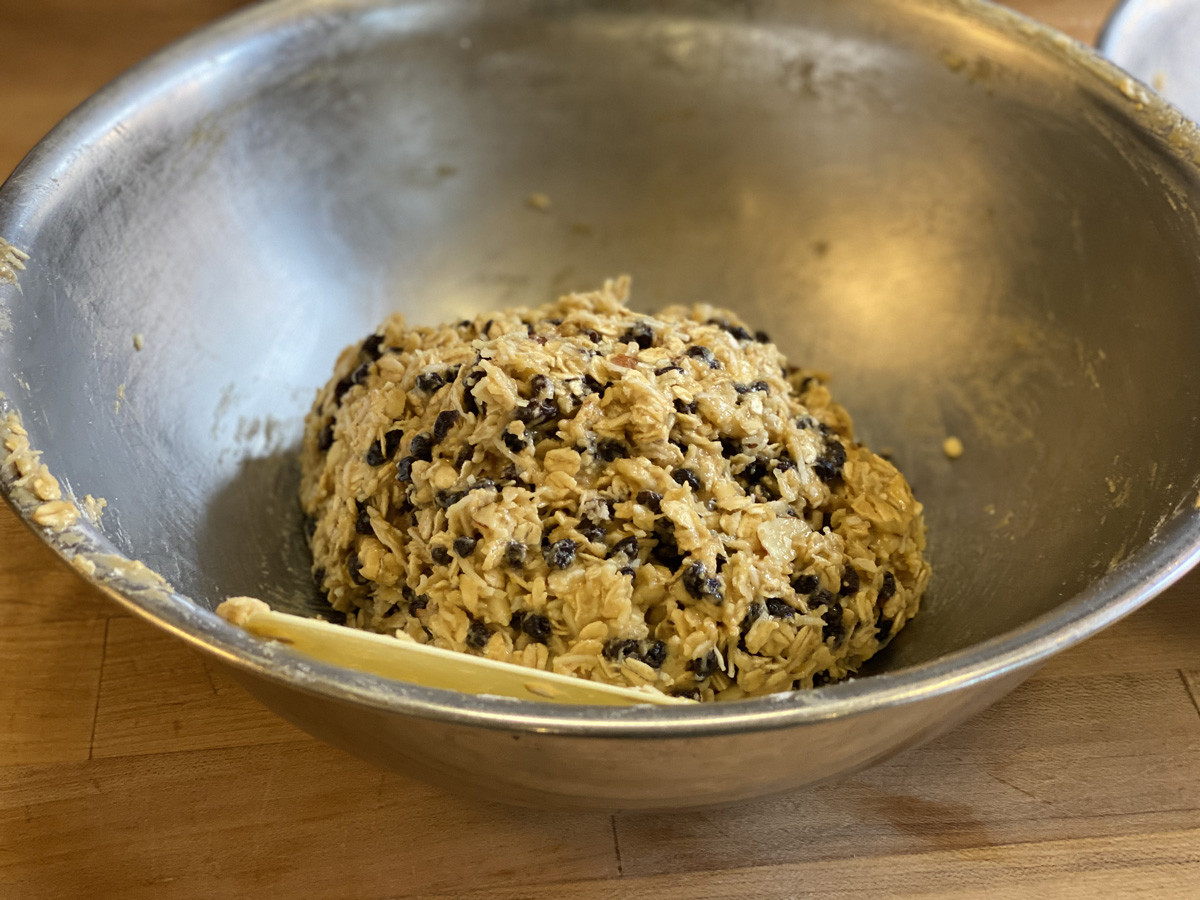 During the next step with floured hands separate the dough into four equal parts and roll the first quarter into 12” log shaped formation. 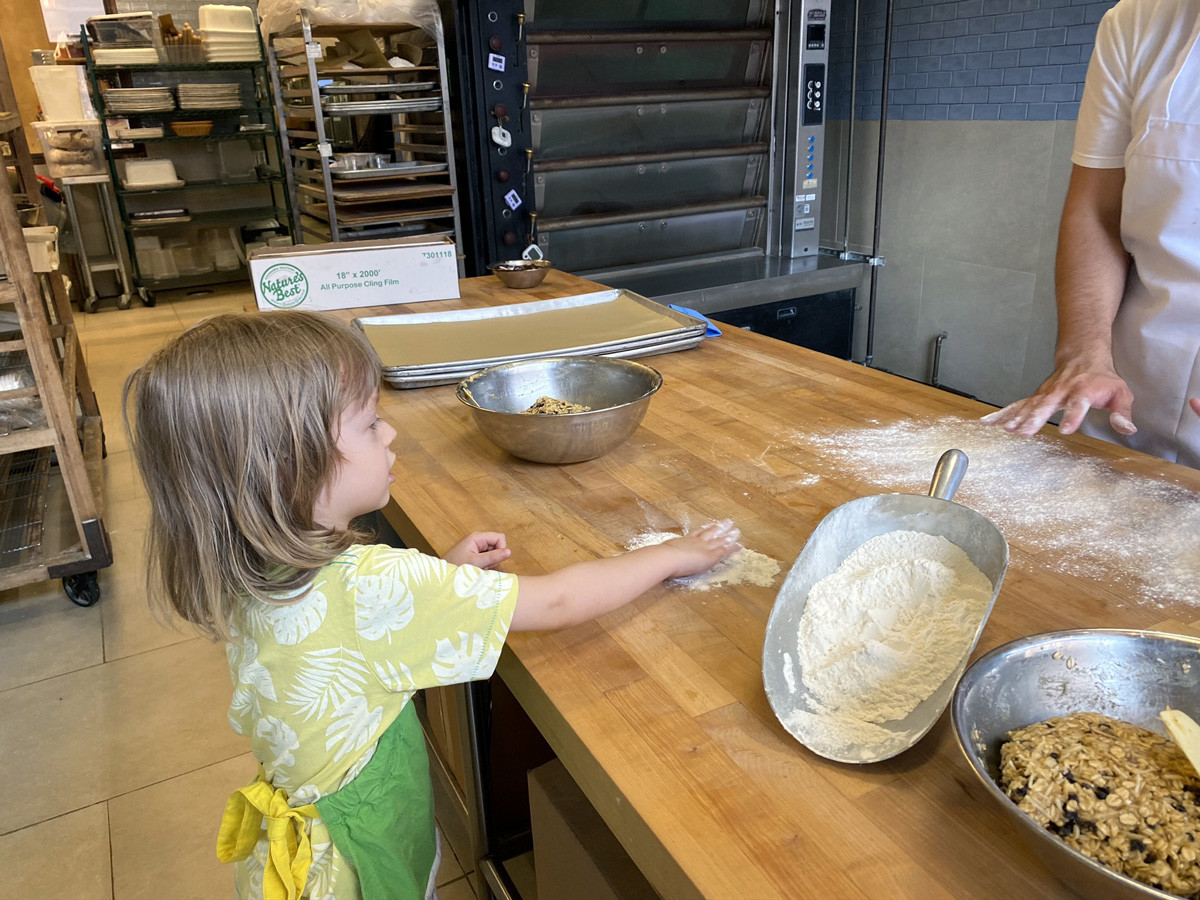 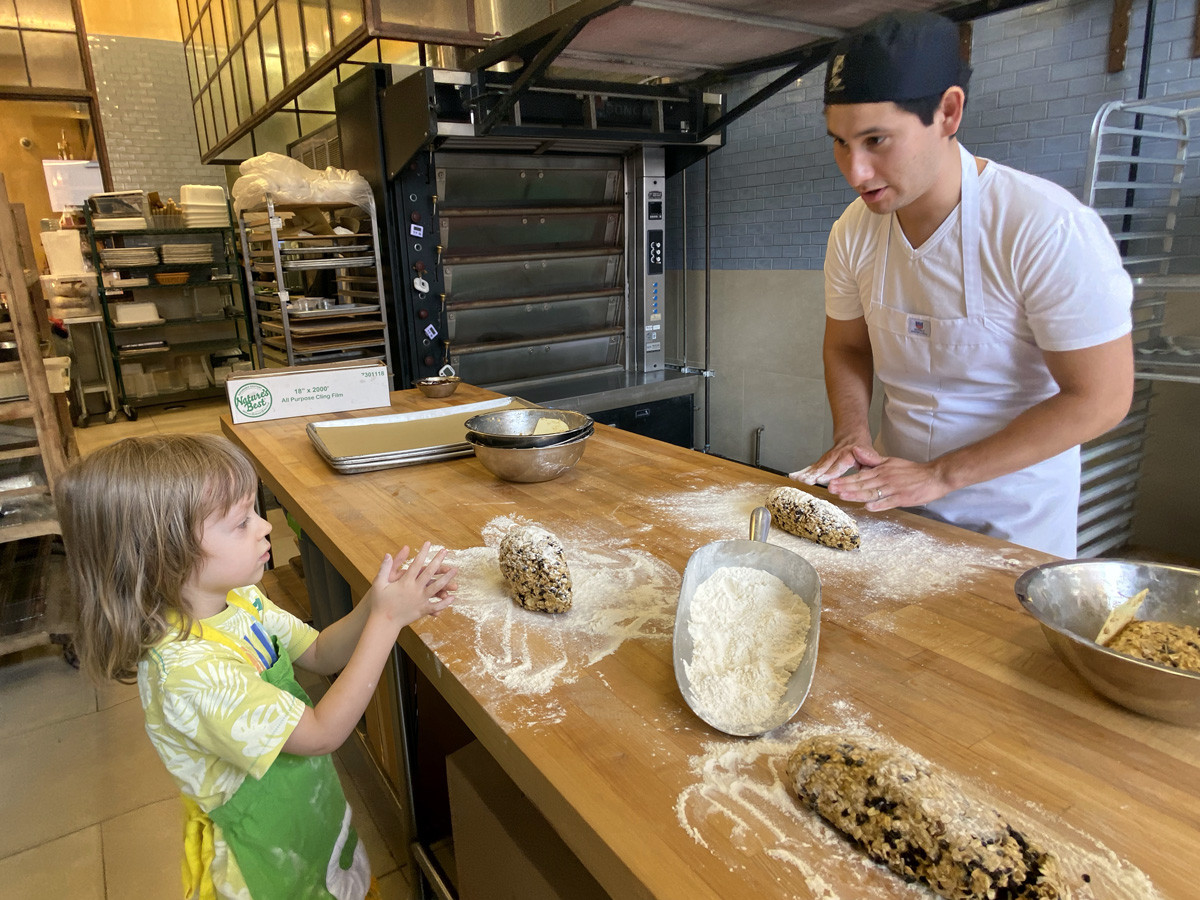 Place the baking sheet with logs in the oven and bake for a quarter of an hour or until they become just slightly golden brown and start showing tiny cracks. 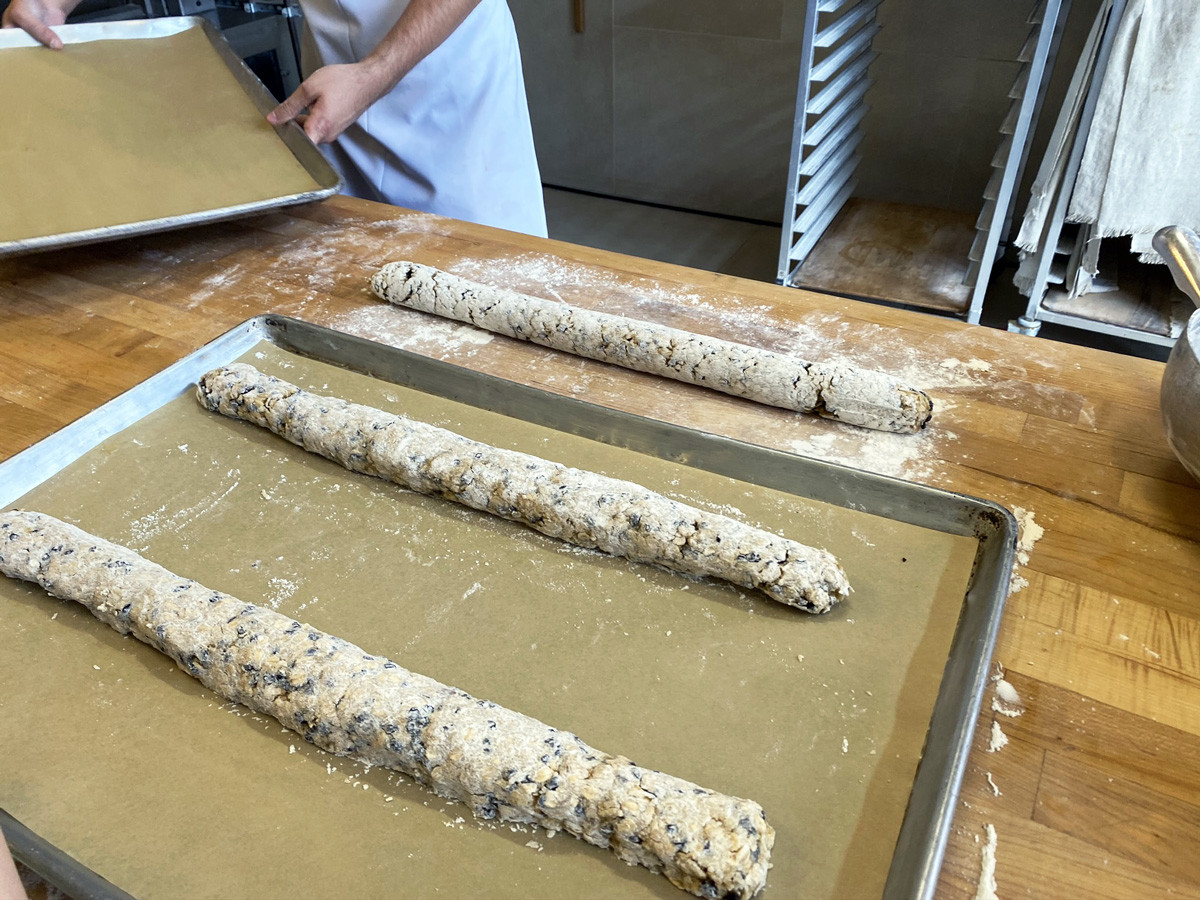 Take the baking sheet out of the oven and let stand for up to an hour to make the logs room temperature. This step is needed to make sure that logs hold shape while you make them into the final form of biscotti cookies. Don’t worry if the center of the logs is still a bit warm after an hour, as long as it’s not hot. 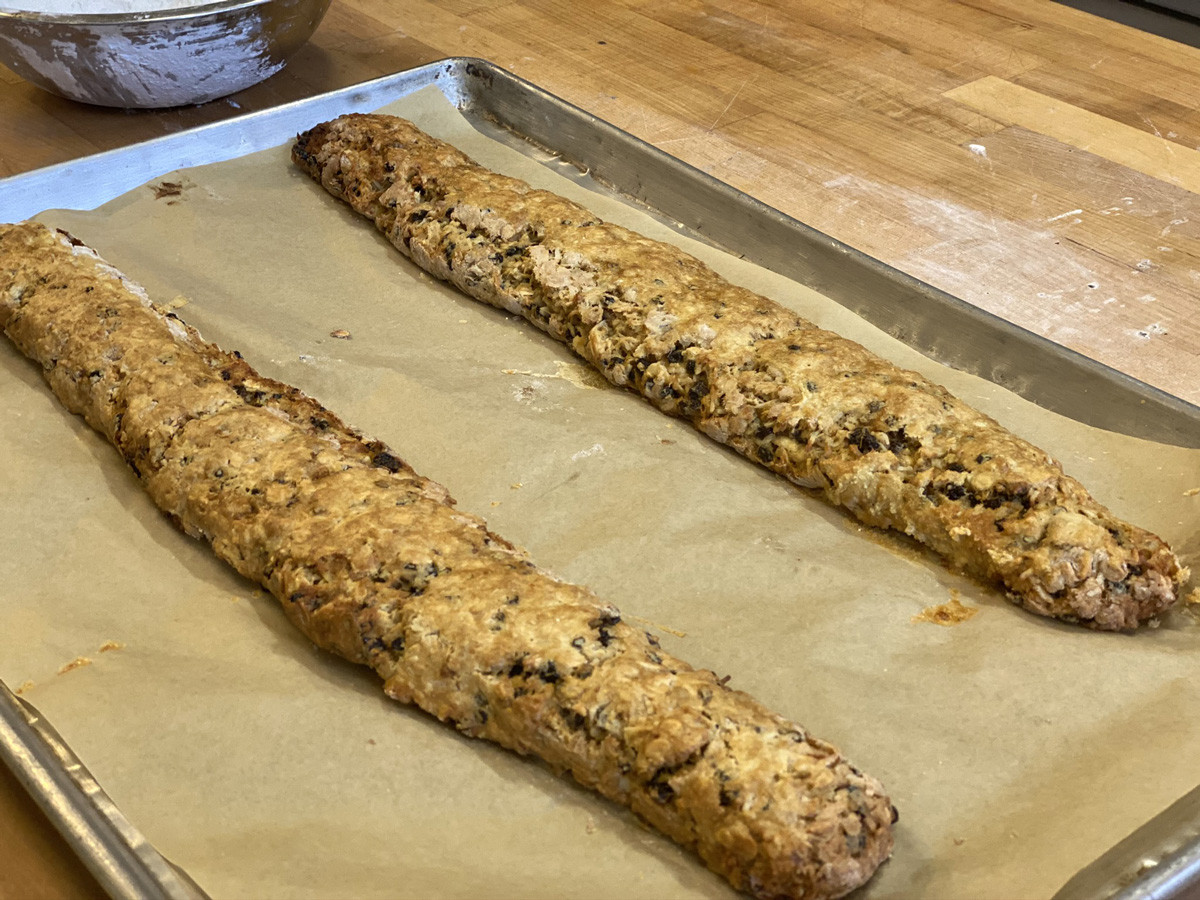 Cut the logs into ½” slices with sharp serrated knife. When cutting try not to press hard, but gently draw the knife in a sawing motion. 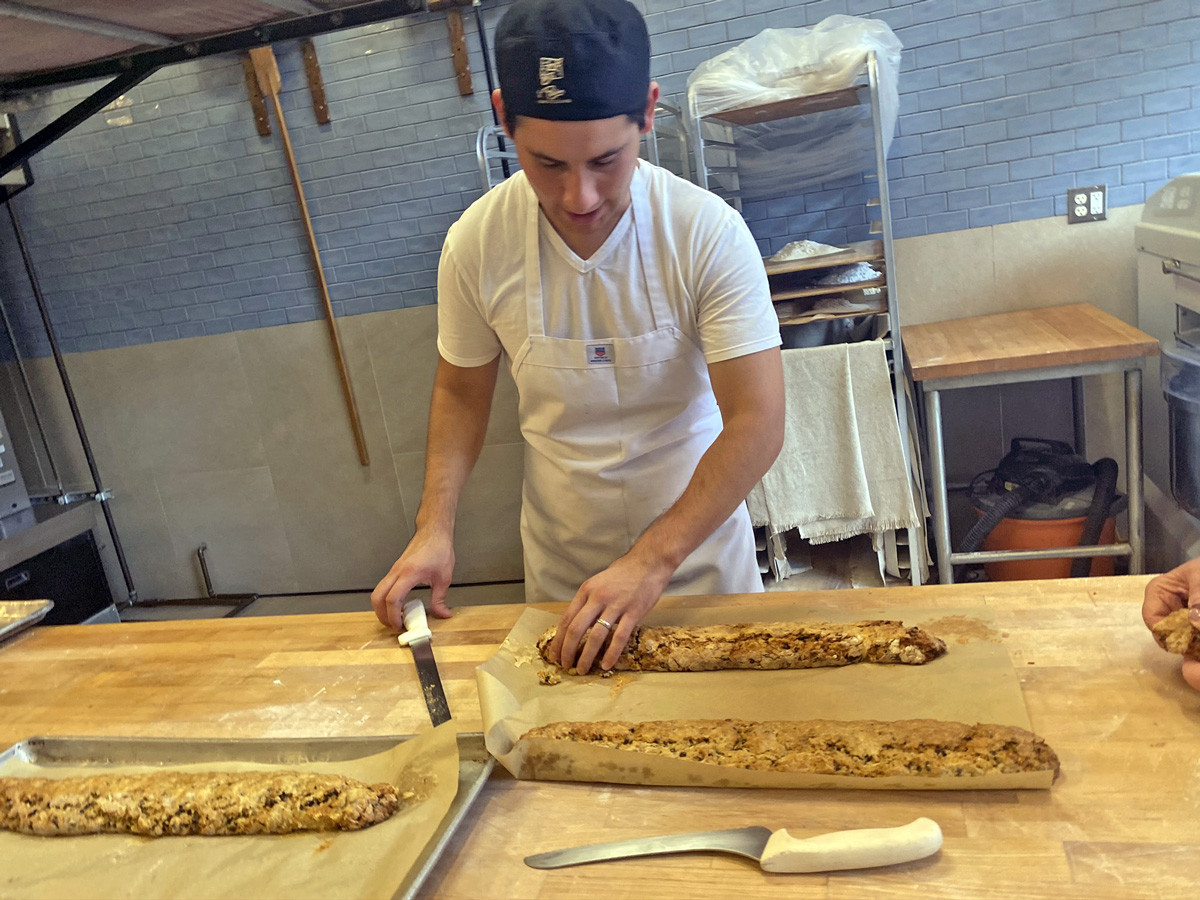 This way you’ll have less crumbling and will preserve the biscotti intact. This step is very important as this is how the biscotti will look when served, so take your time and be diligent. 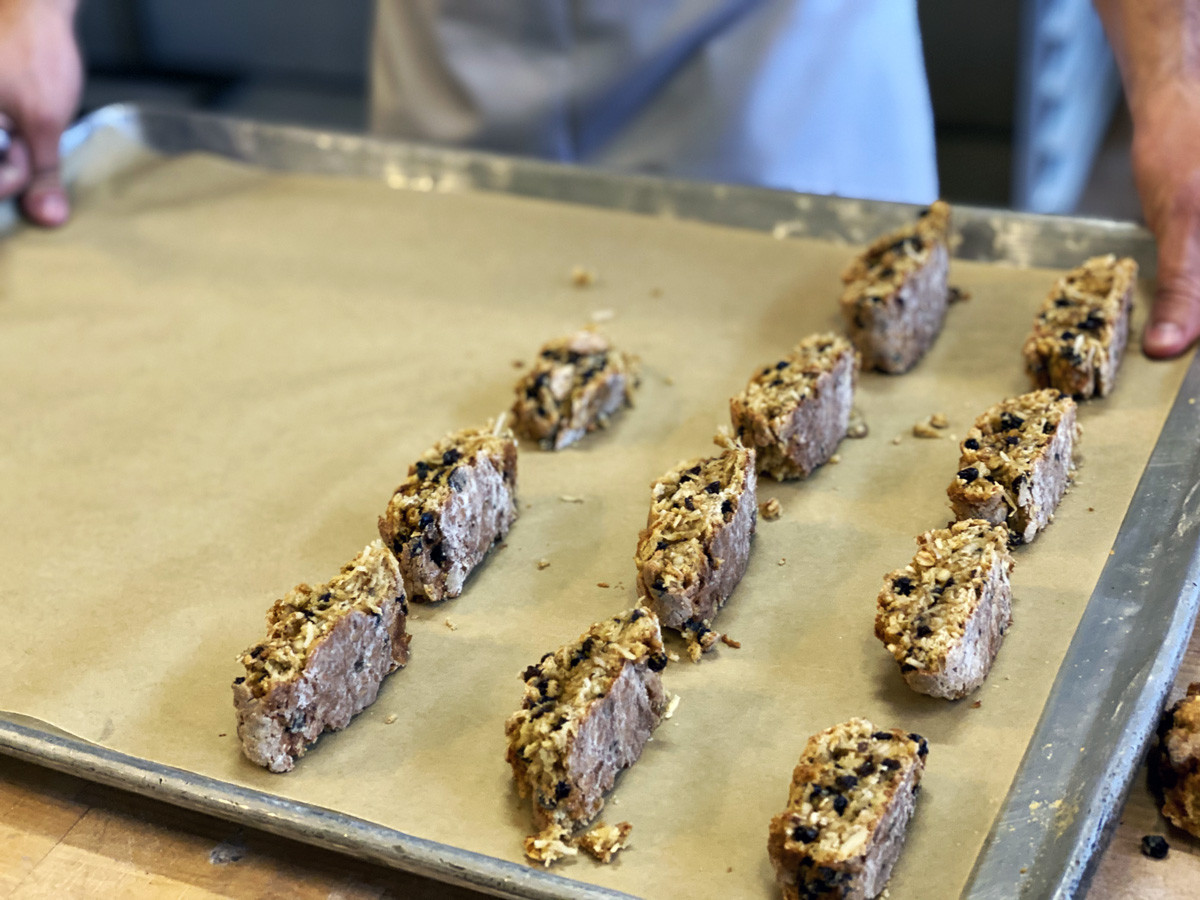 After the slices are cut, put them back on the baking sheet and stand them upright. Bake for another 15 minutes on 325 degrees. They should be toasted and crisp at the end, kind of like biscotti that you buy in stores. Once finished, remove them from the oven, let them cool completely, and serve right away or store in an airtight container. Enjoy and treat yourself with confidence to these Nutrisystem approved healthy snacks!!