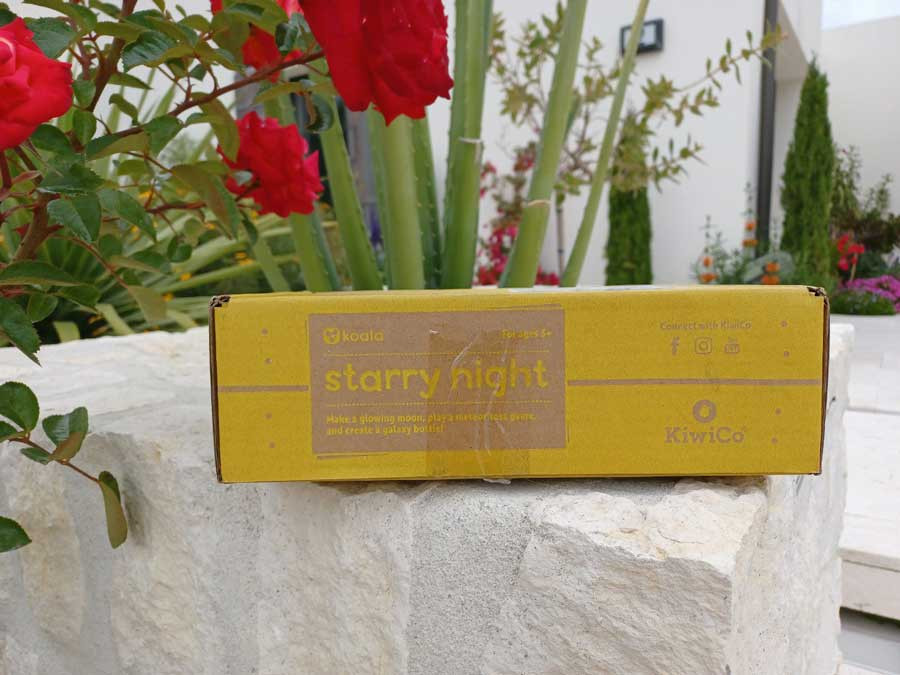 If your child is interested in stars, planets and space exploration KiwiCo Starry Night kit is right what you need. The young space explorer will have a chance to make his or her own glowing moon, play a meteor toss game and create a galaxy bottle. 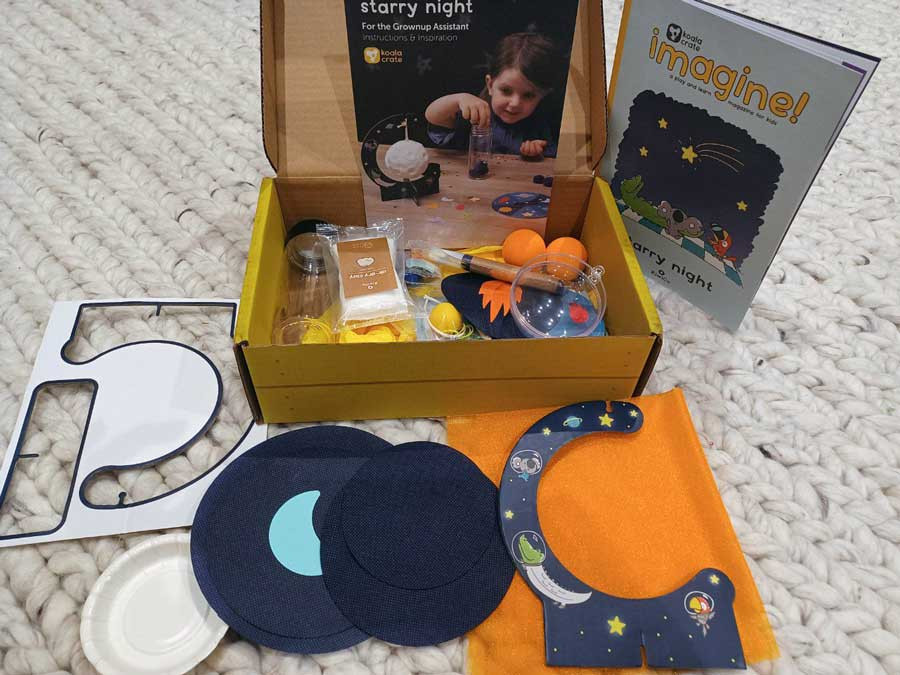 My kid decided to start with the games first and he put aside the materials necessary for playing meteor toss game. For meteor toss you will need 2 foam balls, 2 orange squares, rubber bands, a spinner and space targets. It should be noted that the spinner is shared with the Galaxy Bottle project. 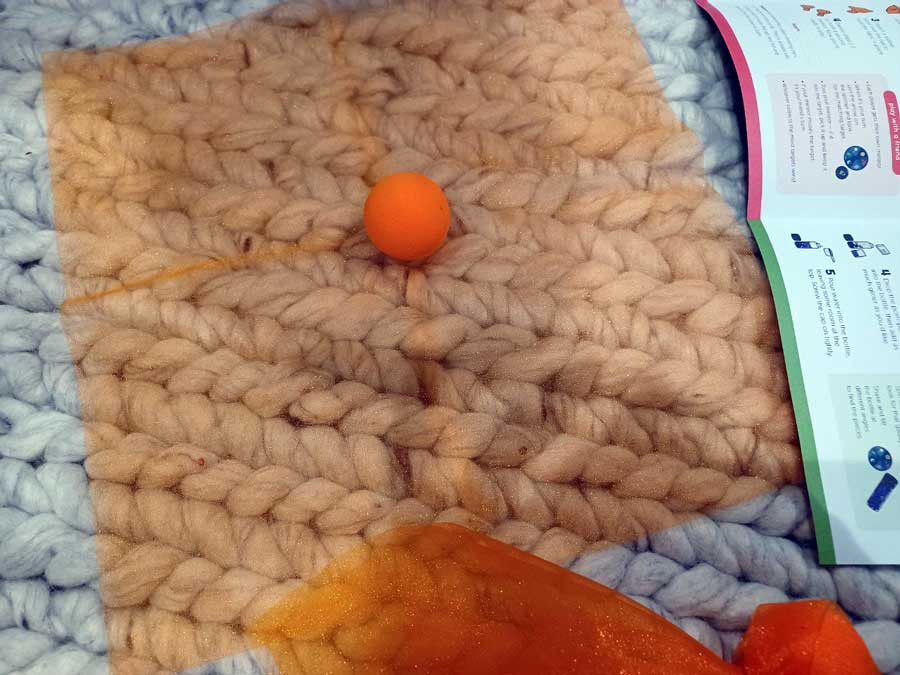 First you need to make 2 meteors. That’s pretty easy. Just place the foam ball in the center of an orange square, wrap it around the ball and secure it with a rubber band. Then spread out the space targets on the floor, put a spinner and start the game. 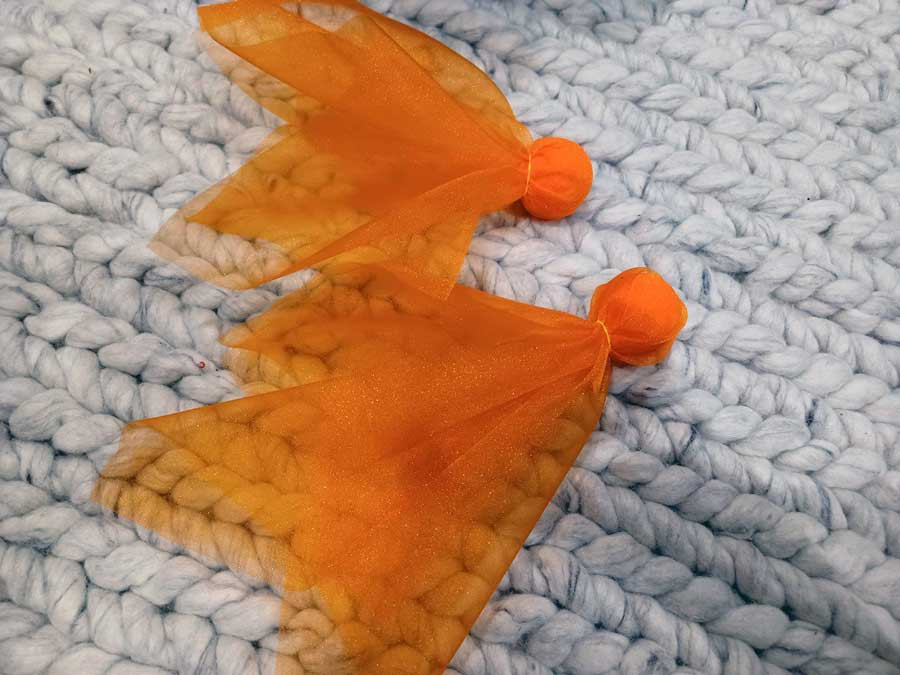 Consider inviting a friend to have more fun playing. Just take turns to spin the spinner, find the matching target and toss your meteor to hit the target. 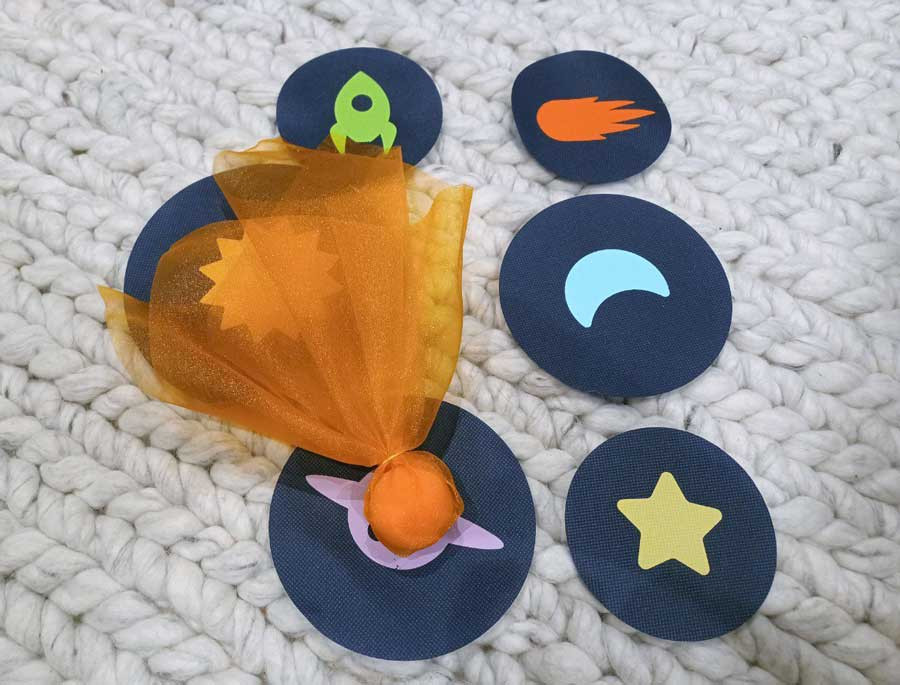 If you missed the target, it’s your friend’s turn to play. The person who collects the most targets wins the game. 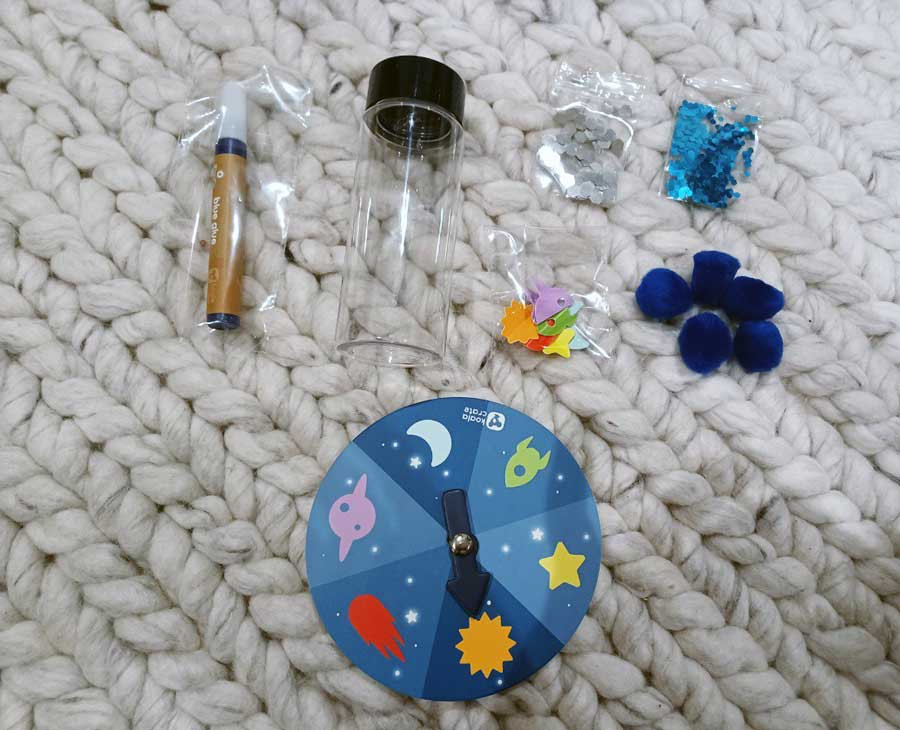 The next project Max was curious to deal with was Galaxy Bottle. This project is messy so make sure you cover your workspace with scrap paper. To make the Galaxy Bottle you will need blue glue, a bottle, galaxy pieces, glitter, pom-poms, spinner and some water. 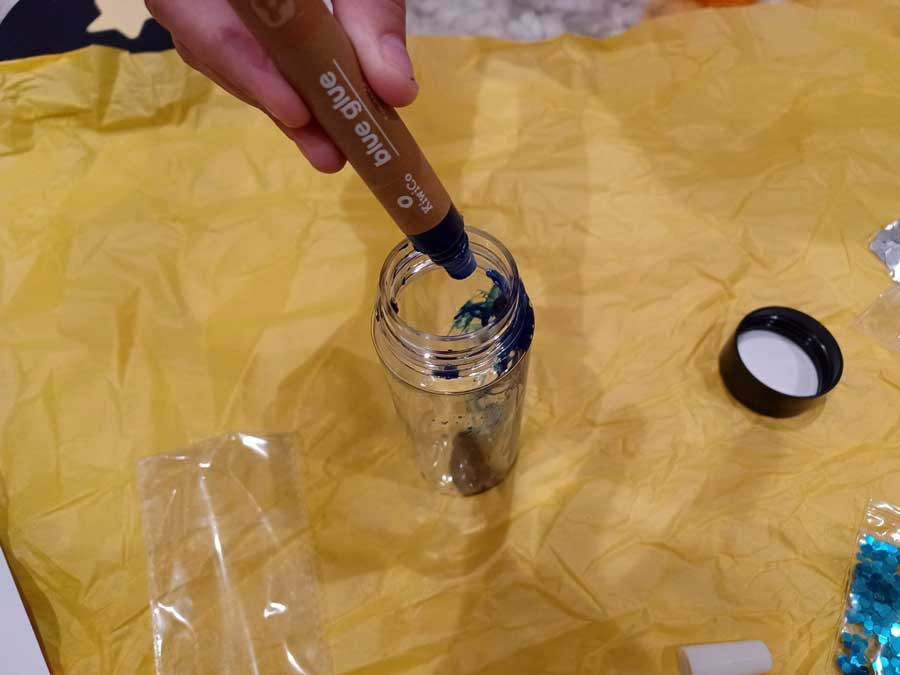 First, squeeze the blue glue into the bottle. 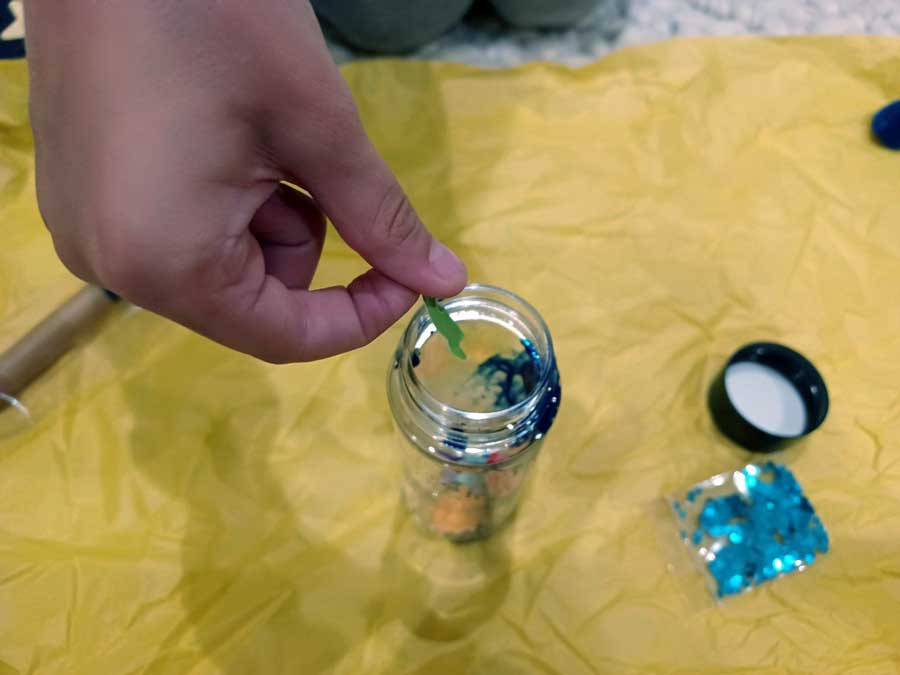 Add galaxy pieces into the bottle. 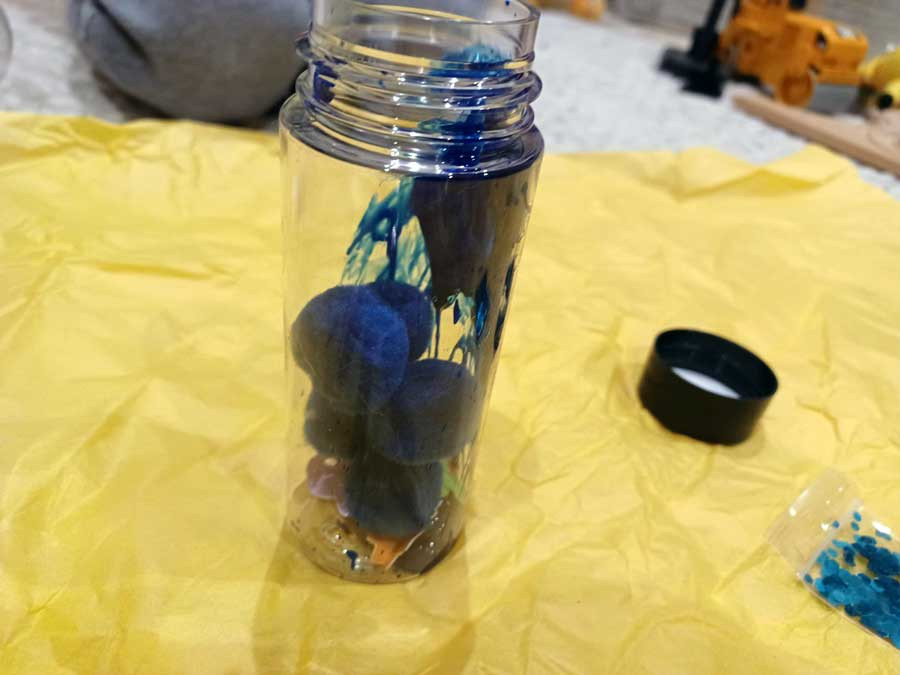 Drop the pom-poms and glitter into the bottle. 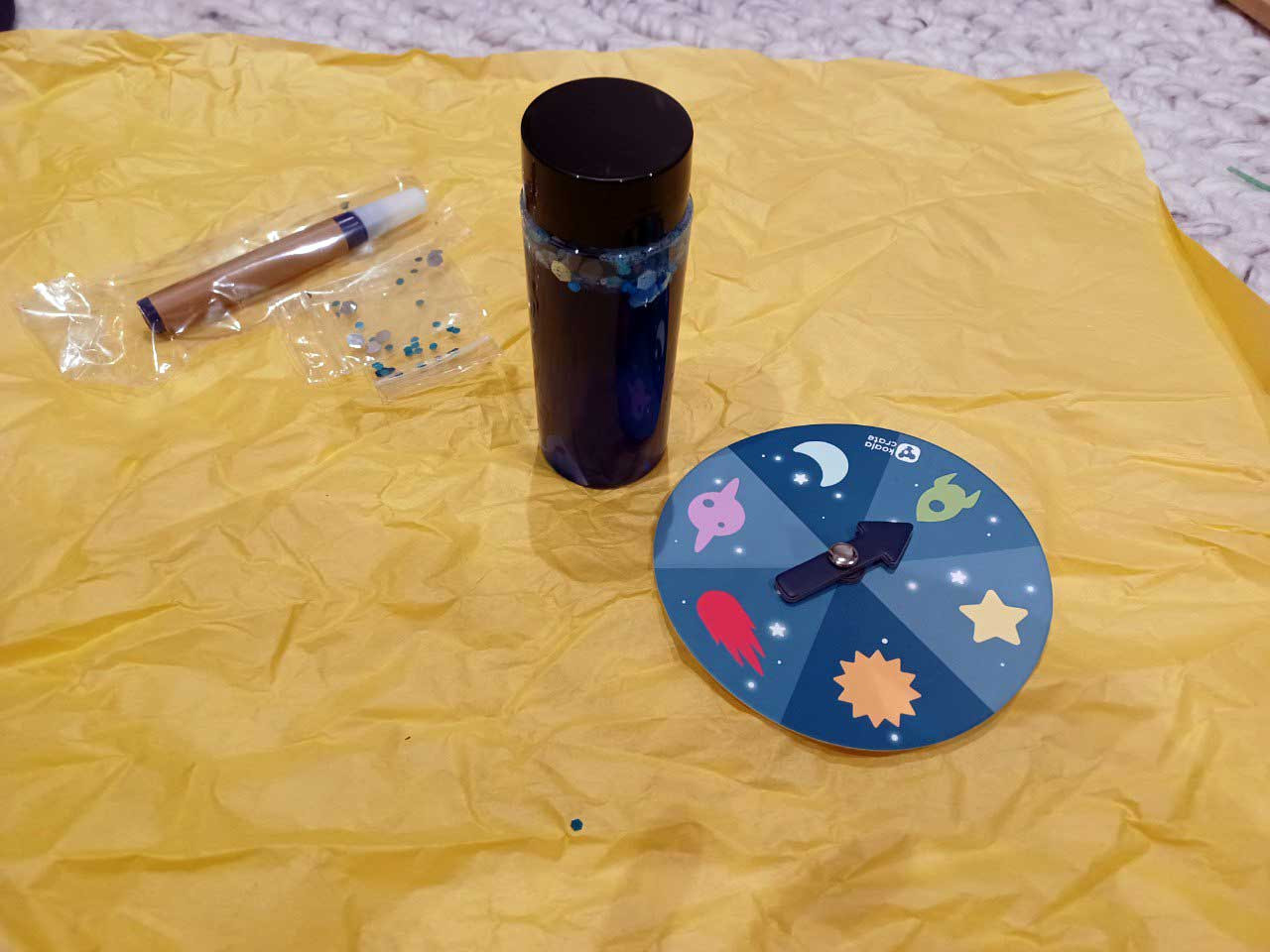 Pour some water into the bottle. Shake it up and add more water until it’s full.

To start the game spin the arrow and look for the galaxy piece in your bottle. You will need to shake and tilt it at different angles to find the galaxy piece. The bottle is very beautiful and looks like a fairy-tale starry night with glittering stars inside. My son was just mesmerized by the sparkling bottle and it was not very easy the find the planet he was looking for. The planets tend to quickly disappear once you spot them, but it’s fun to be looking for them again and again. 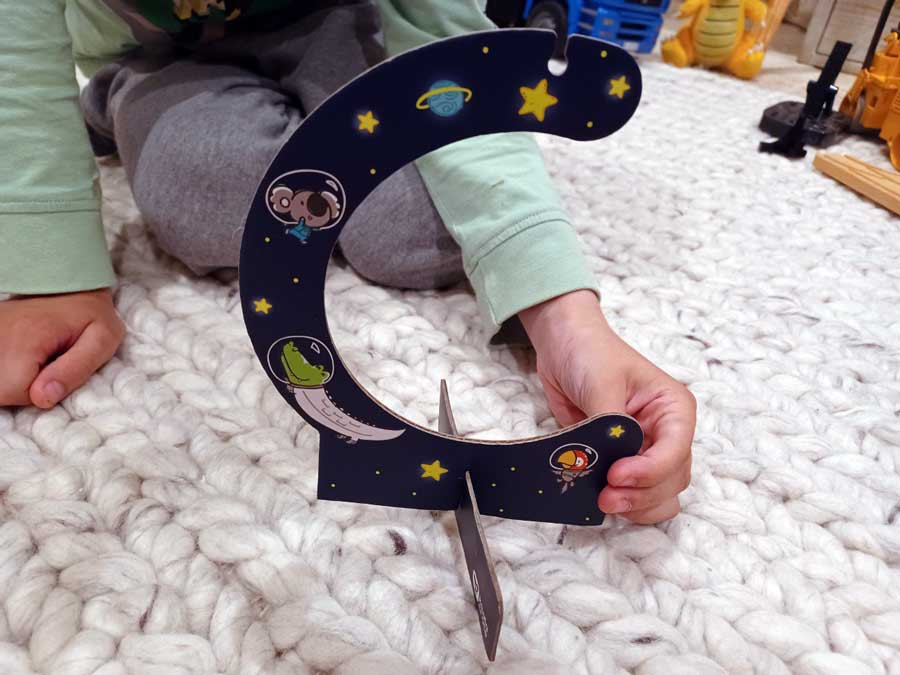 The Glowing Moon project turned out to be the most complicated of all three but it can be showcased on the shelf or the desk to add some glow in the dark! To make the glowing moon you need ornament pieces, a string, glow-in-the-dark paint, moon stand pieces, a bead, clay, a paint plate, a sponge brush and scrap paper as the project is messy and you will have to cover your workspace too. 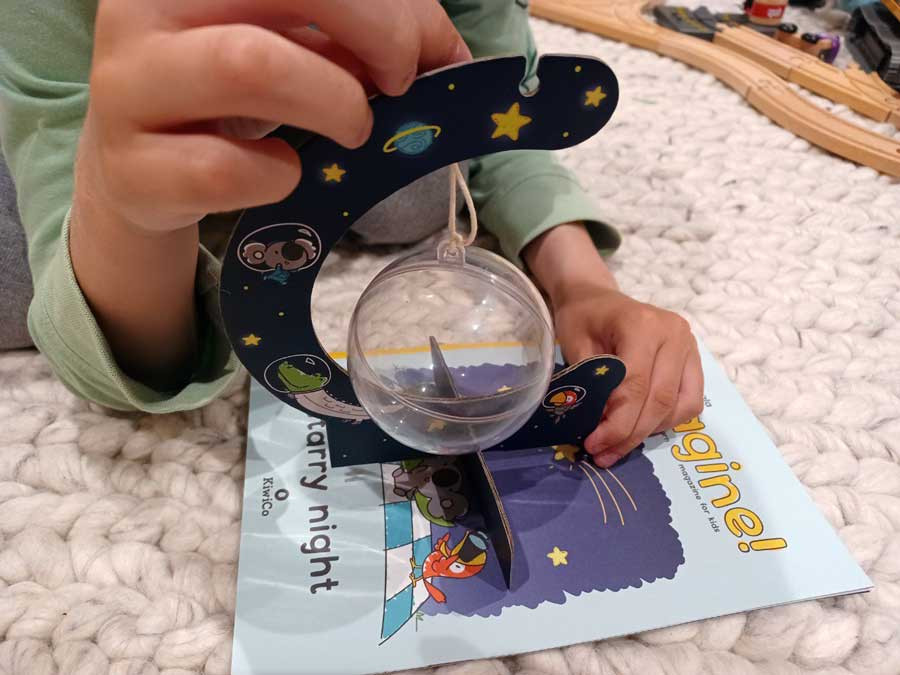 To make the moon, you need to put the sphere pieces together and secure it with the string. 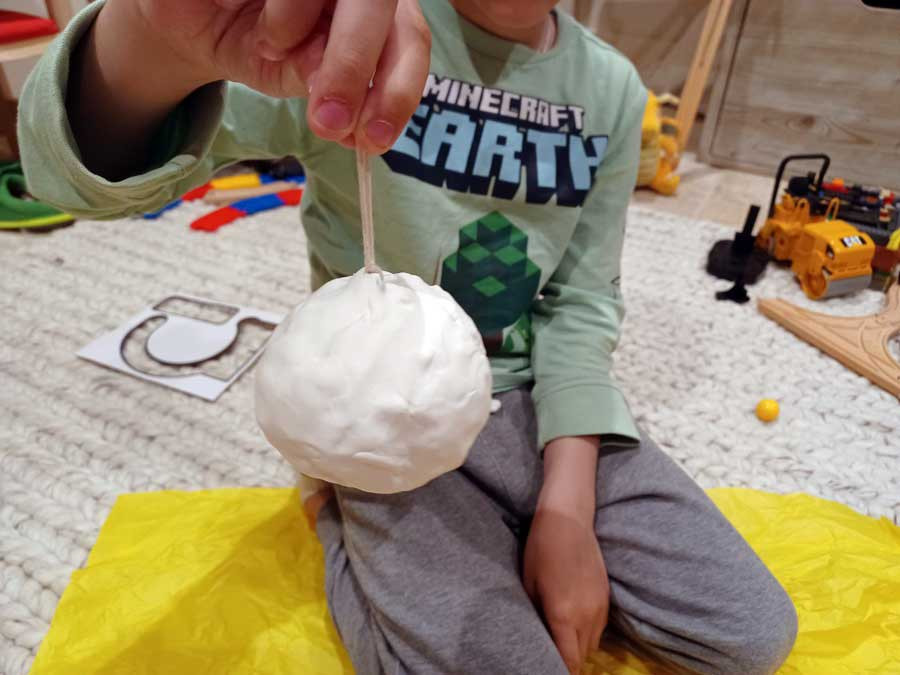 Then roll out the clay and wrap it around the sphere.

Press the bead into the clay to make craters on the moon. 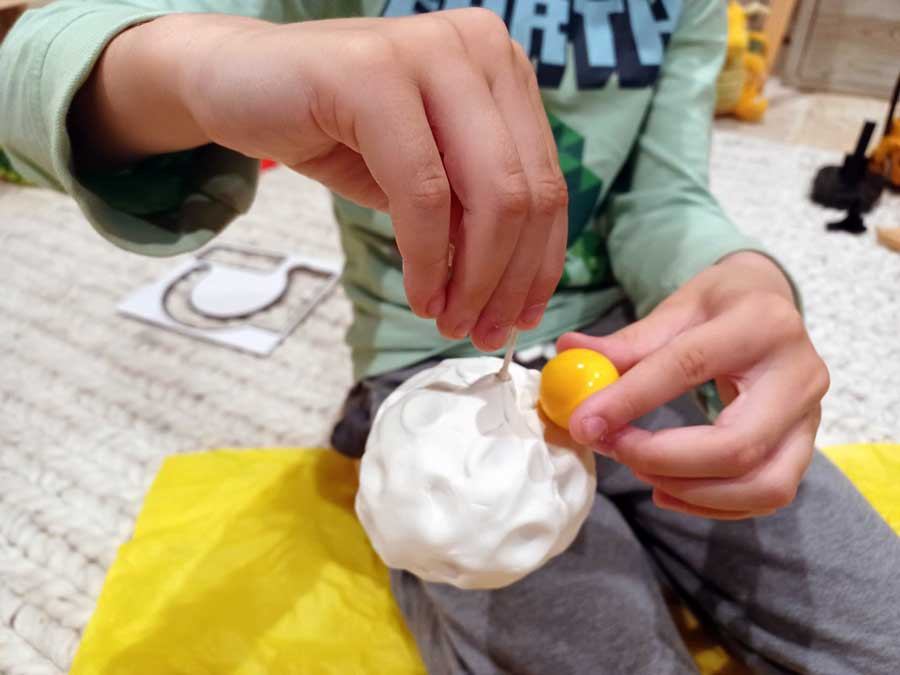 Squeeze the glow-in-the-dark paint onto the plate and dab the paint all over the moon with sponge brush.

Make the moon stand and hand the moon onto it to let it dry. 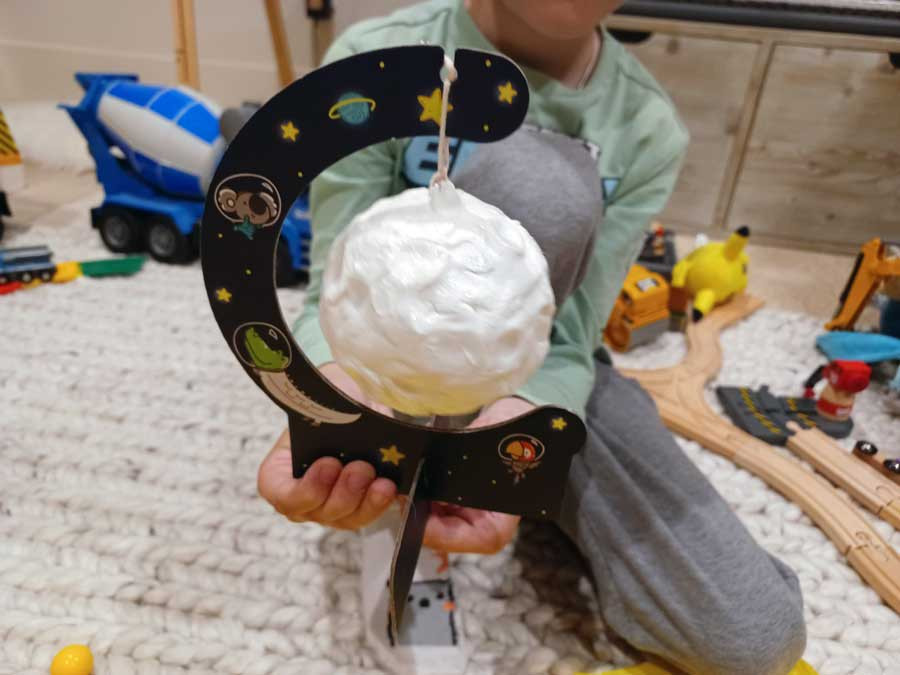 After the moon absorbs some light it will glow in the dark area! 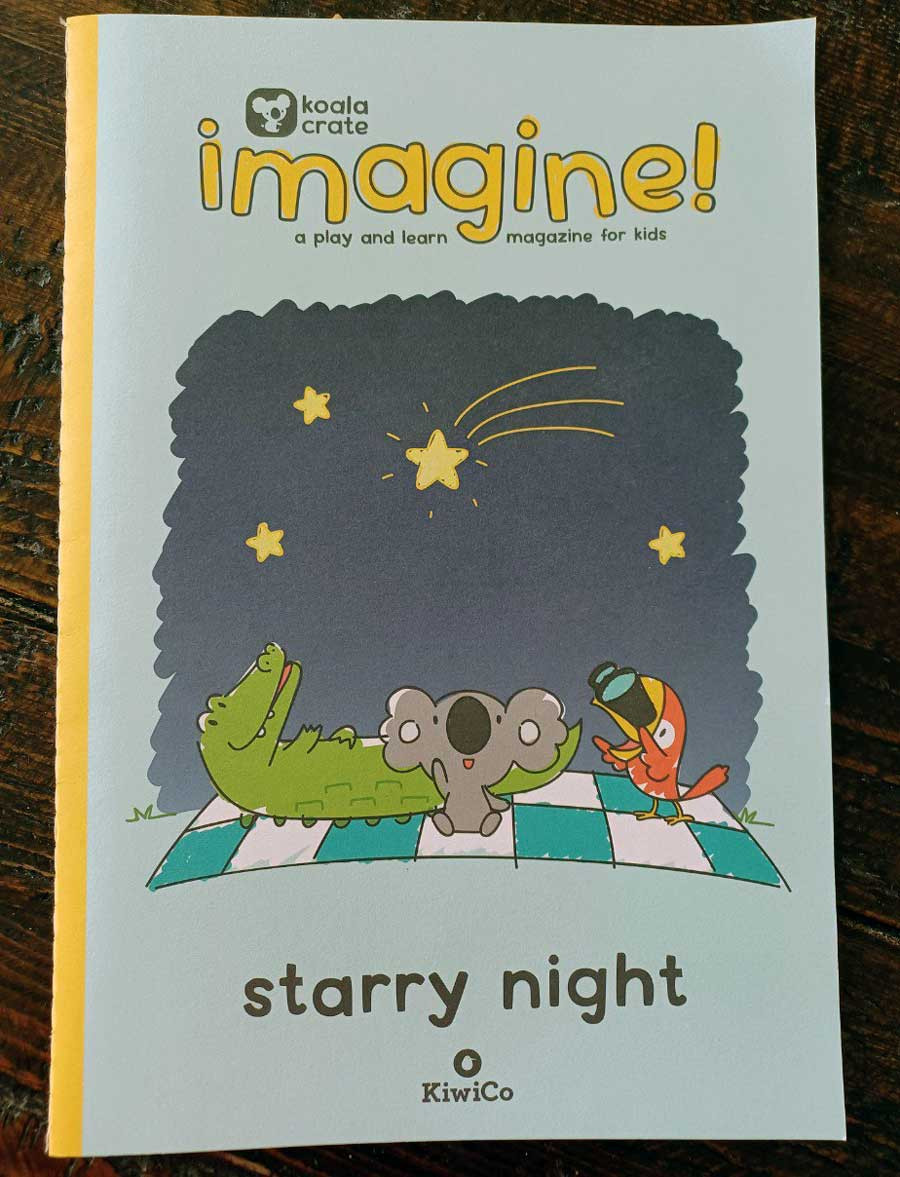 Finally, there is Imagine magazine with lots of fun information about planets, stars and constellations. Kids will learn about the most popular star constellations and how to find them in the starry night! 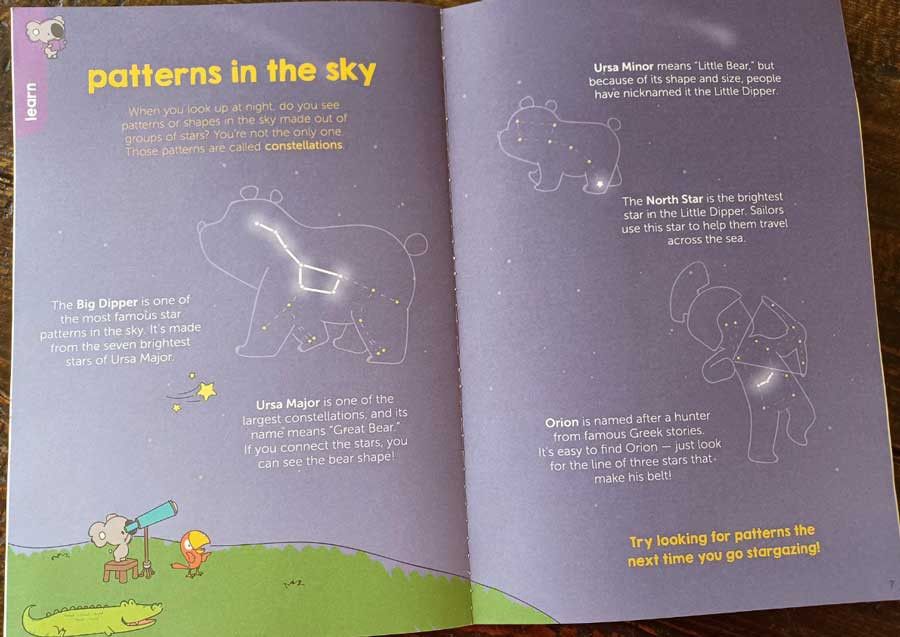 If there is a little bird lover in your family surprise him with 3 great DIY projects about birds from KiwiCo. This box is called Birds and it offers supplies for making your own bird costume with a feathered mask and wings.

If your kid is into cars and loves DIY projects he is sure to enjoy building automobiles and experimenting with a racing ramp. With Cars from KiwiCo he will also explore tire-track patterns and learn traffic safety rules.