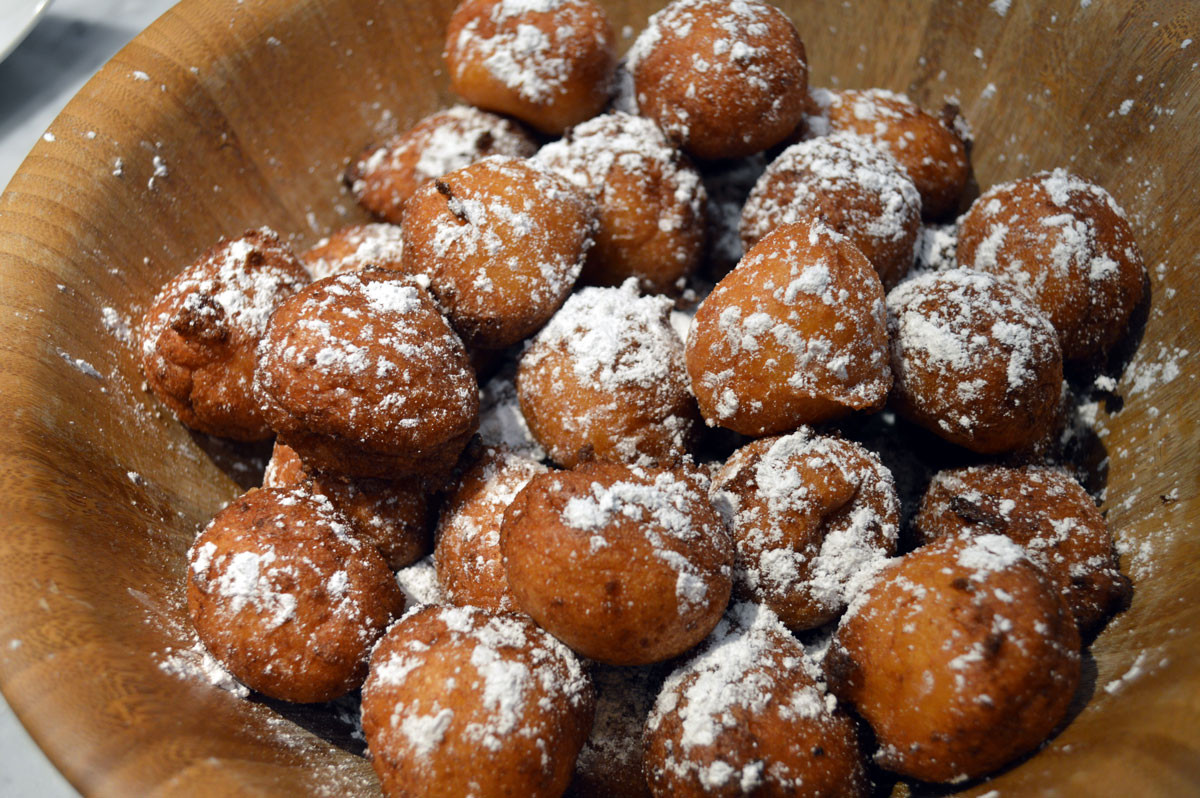 We made donuts with my daughter yesterday. We used a recipe from internet and it wasn’t any good. They were dry and tasted more like cake than donuts. So today I decided to show her how it’s really done - in Europe. I grew up loving these deep fried cottage cheese donut balls and miss them terribly!

The recipe we used is my mom’s and requires one ingredient that might not be at everybody’s refrigerator – cottage cheese. I use Lithuanian brand that can be found at international farmers markets, but drier varieties, like Friendship cottage cheese, can also be used. It should be at least 5% fat and in crumbs, no liquid. All other ingredients are very simple and straight forward.

This recipe might not be the best for dieters, but it’s amazing for cooking with kids. All I had to do was separate egg yolks from whites, and my daughter did the rest, and she is not even 10 yet. My strategy with her is to get her hooked on baking and then slowly introduce her to the rest of cooking secrets. She gladly helps me with anything I ask, but would not be very interested in making roast chicken just yet. But it’s coming after all the pies and donuts are exhausted!

Cottage cheese balls take about 30 minutes to make, at best, and another 30 to fry them a few at a time, so be ready to devote a good hour. They are so good though that it’s worth it! They are fried in oil, but they also have 8 eggs and 400g of cottage cheese, so I wouldn’t deem them completely unhealthy. And you can always use less sugar or substitute. 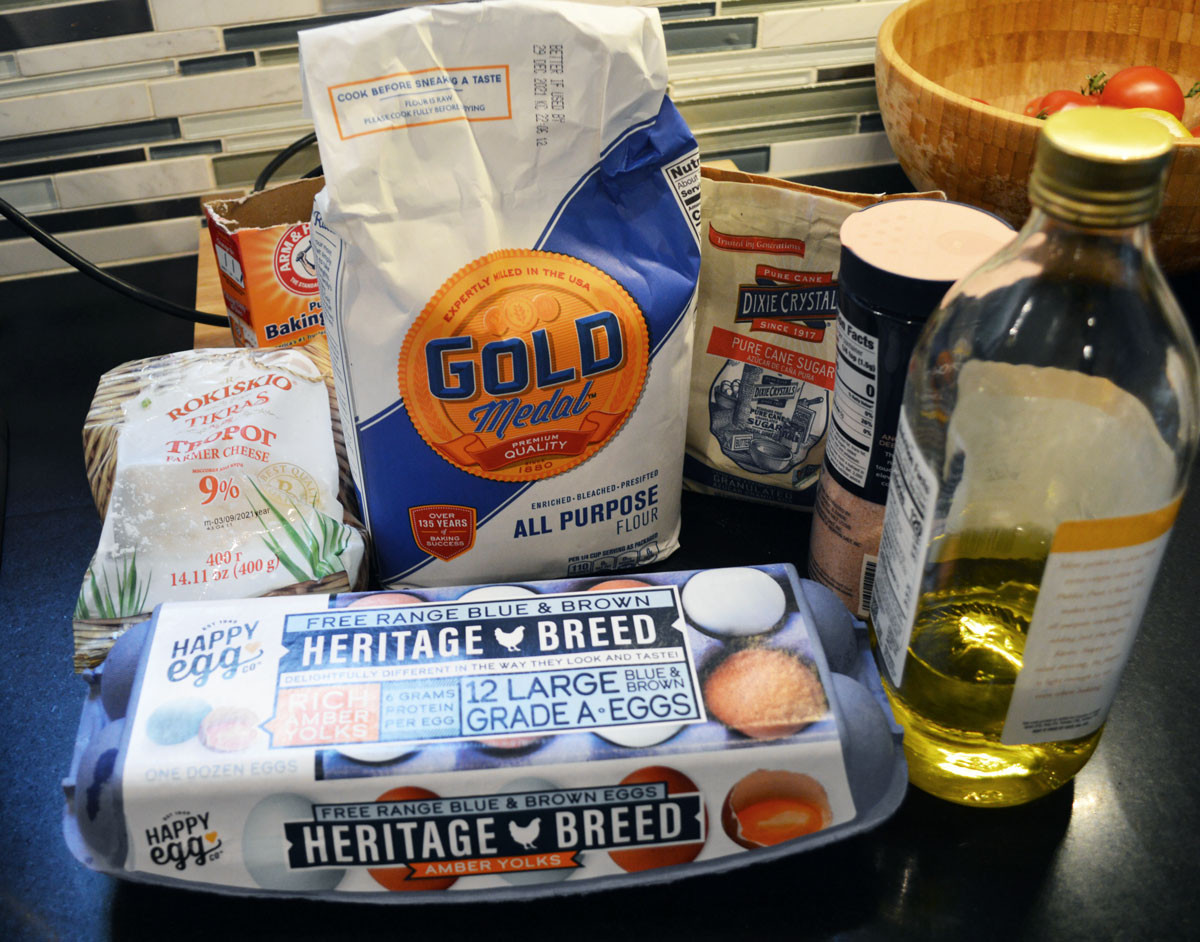 We started by separating egg whites and yolks. 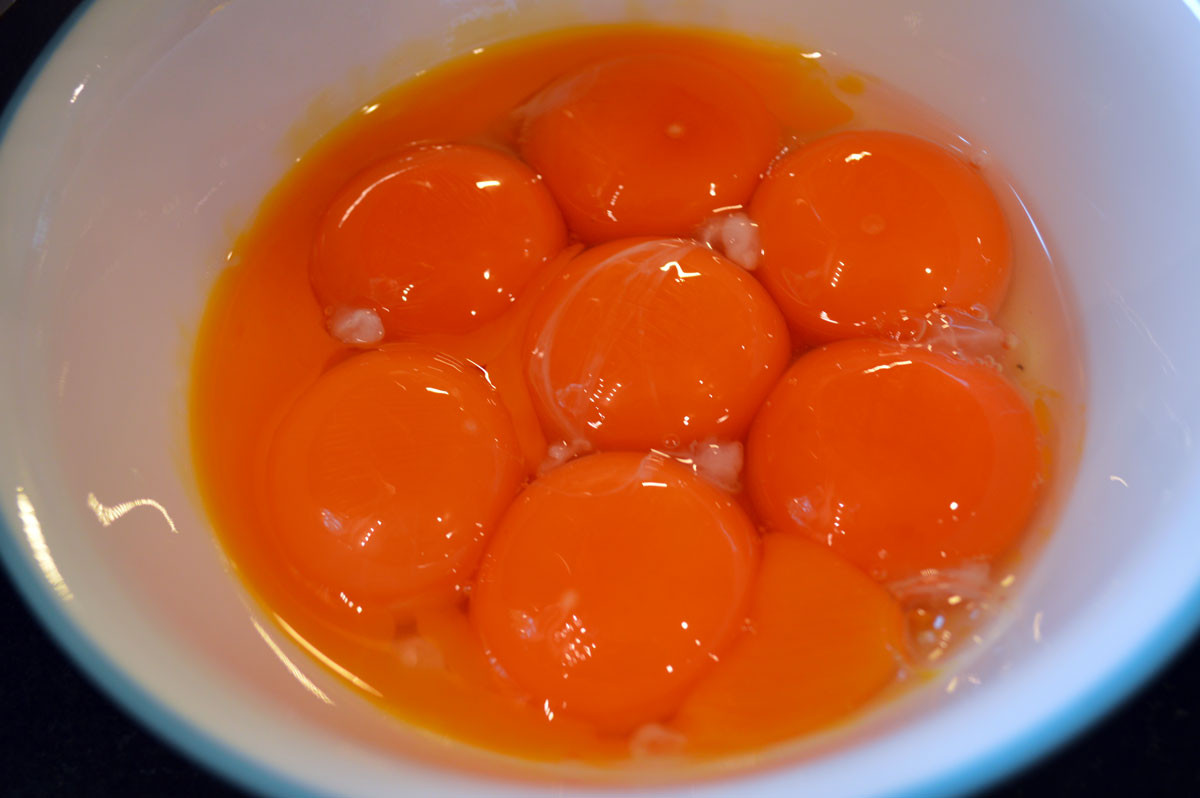 Once done, put the yolks in a small bowl and set aside. 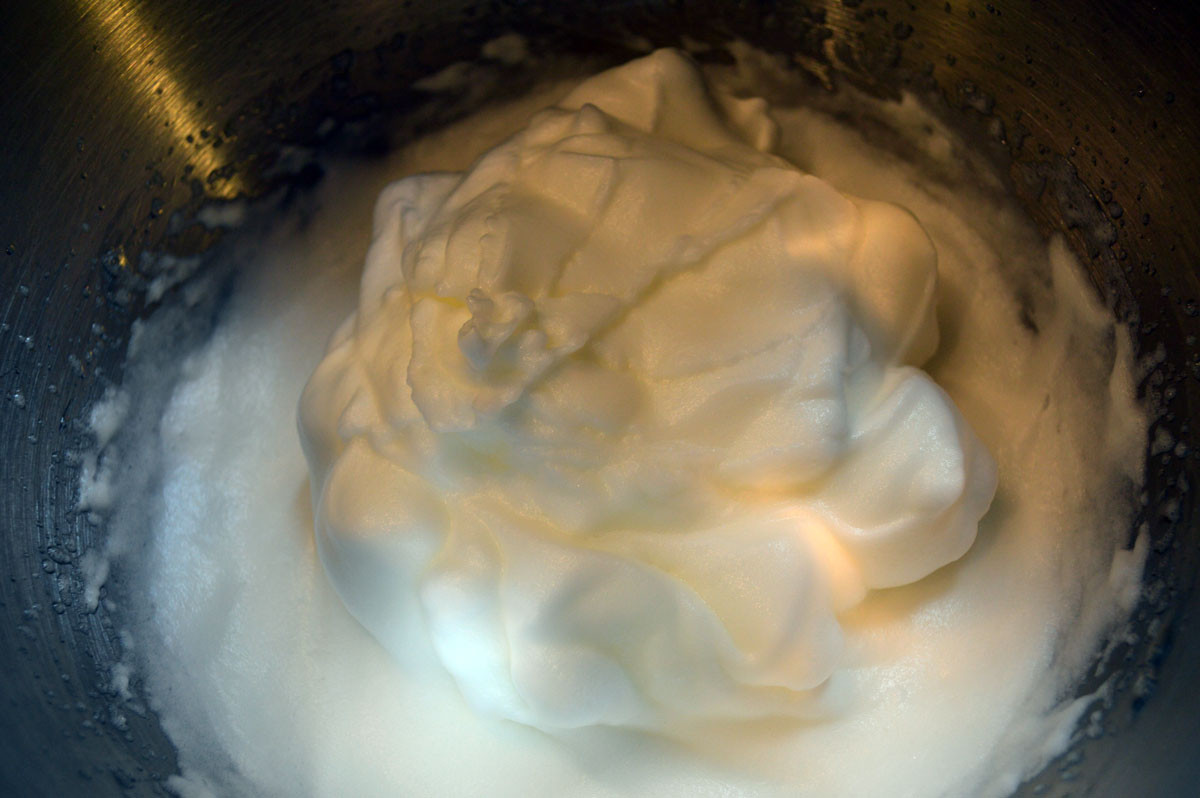 Whip 4 whites with a mixer on high speed until whites form soft peaks and then transfer it into another bowl temporarily. 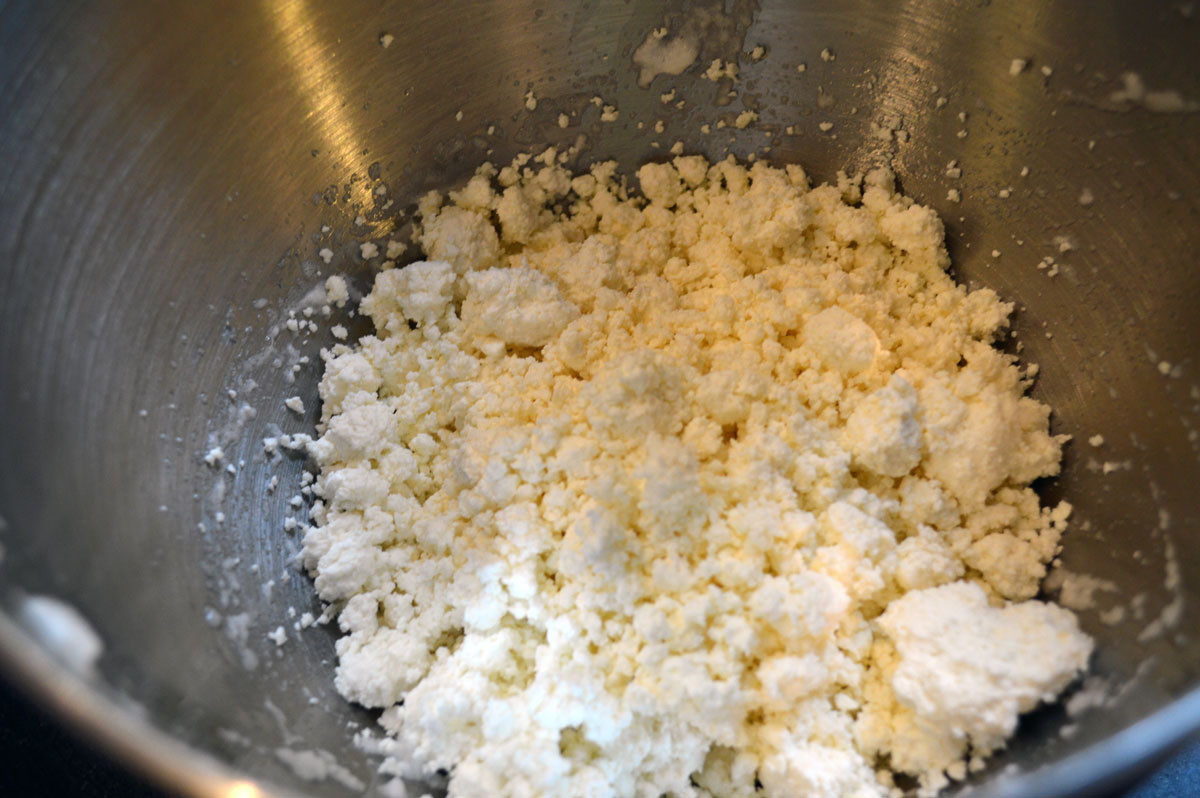 In the mixer bowl combine cottage cheese and egg yolks. 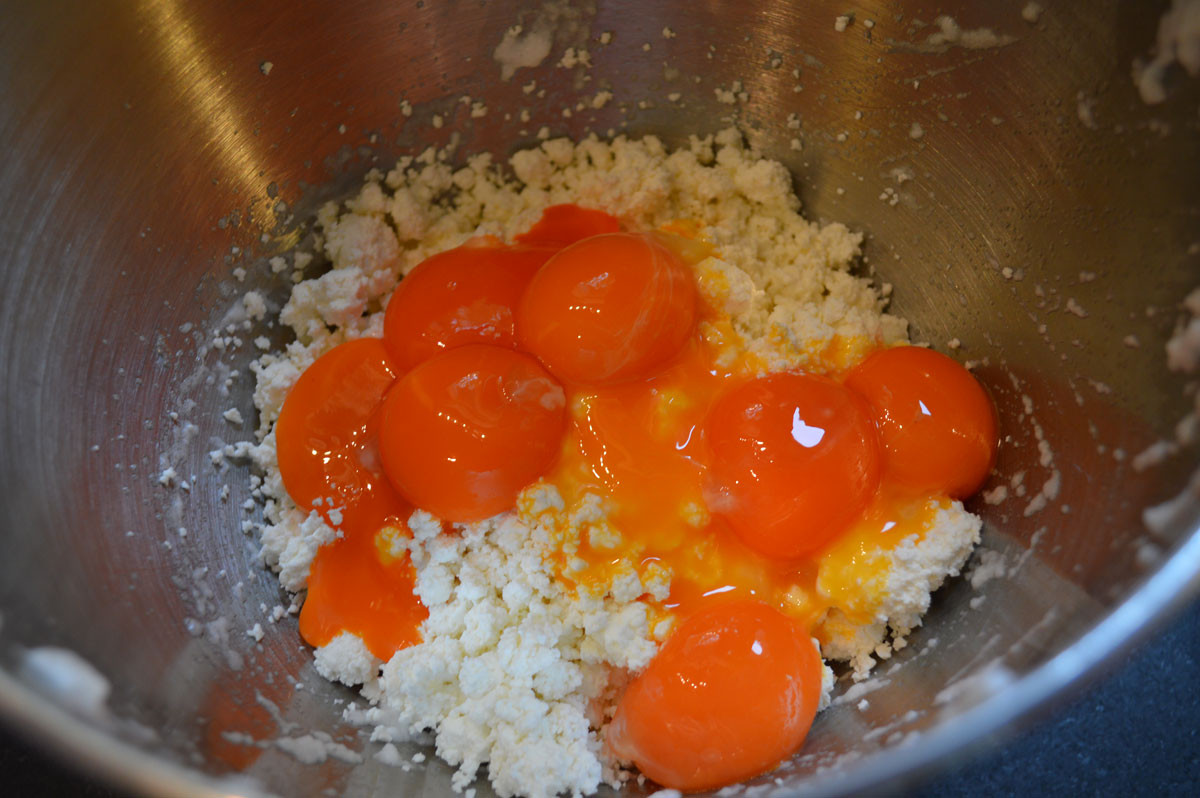 Mix them together thoroughly. 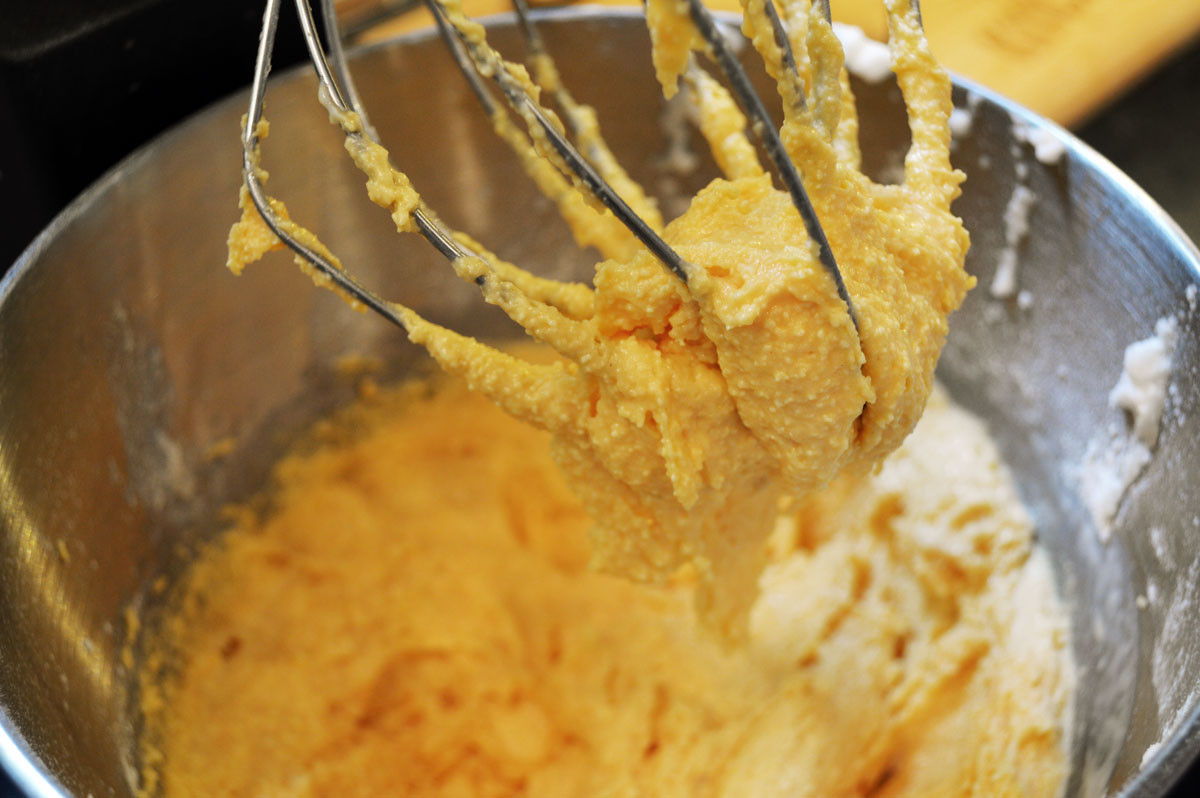 Then slowly add sugar and put salt. Continue mixing. Next is flour. This step is my daughter’s favorite – she loves adding spoon by spoon and watching the mixture changing and getting thicker. Continue mixing and add 1 teaspoon of baking powder neutralized with just a bit of kefir or something sour like that. 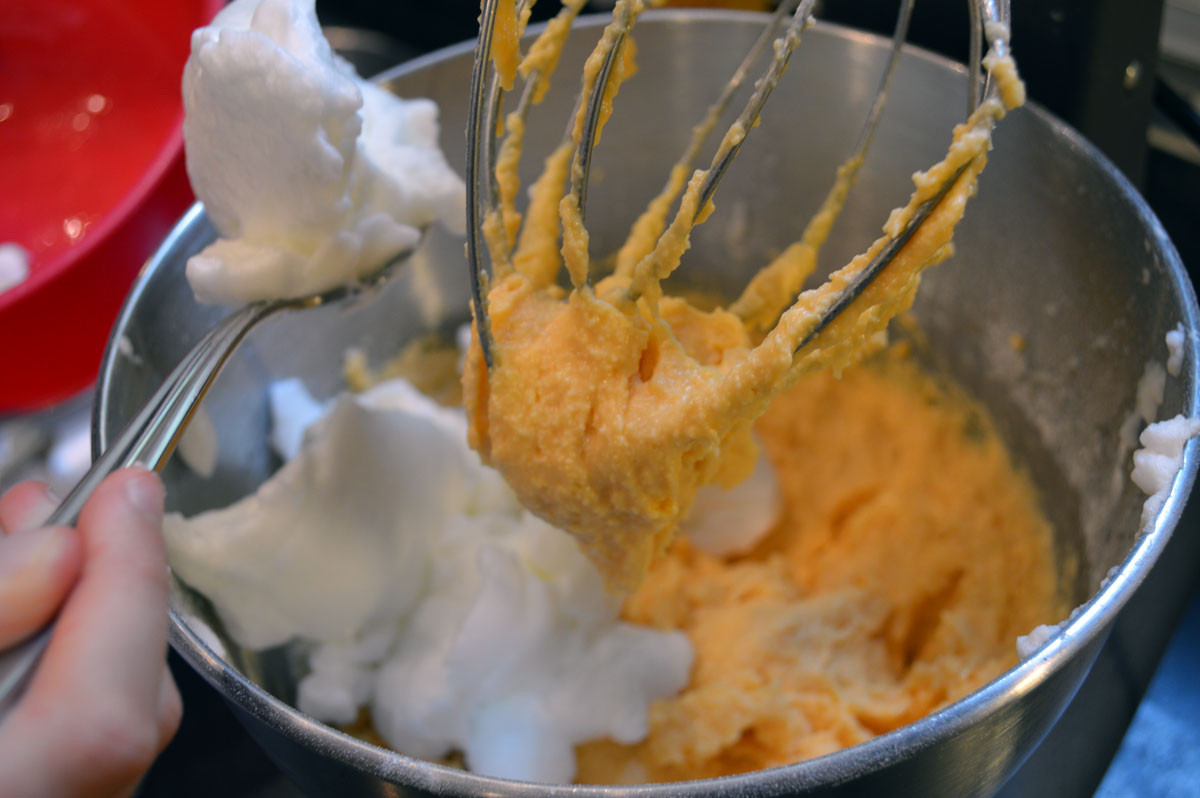 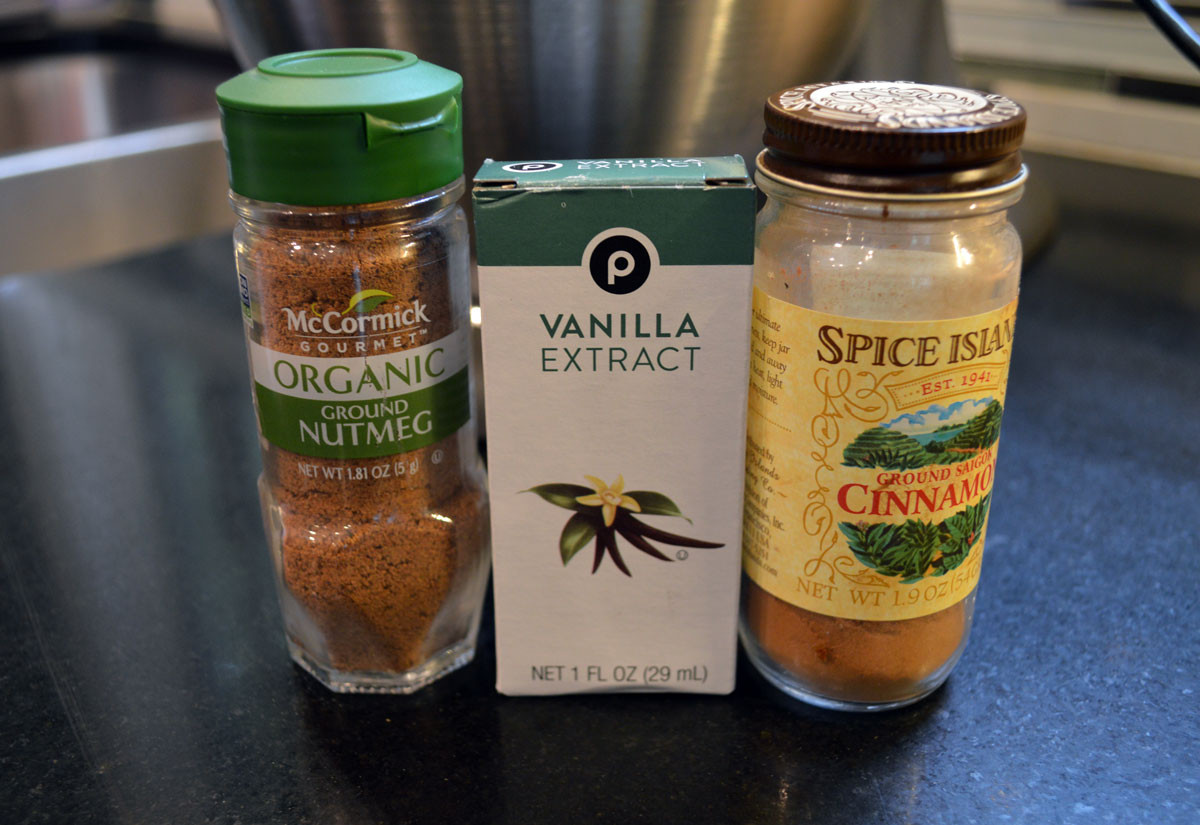 We also added just a pinch of cinnamon and nutmeg, and a few drops of vanilla extract. The last three ingredients are optional. 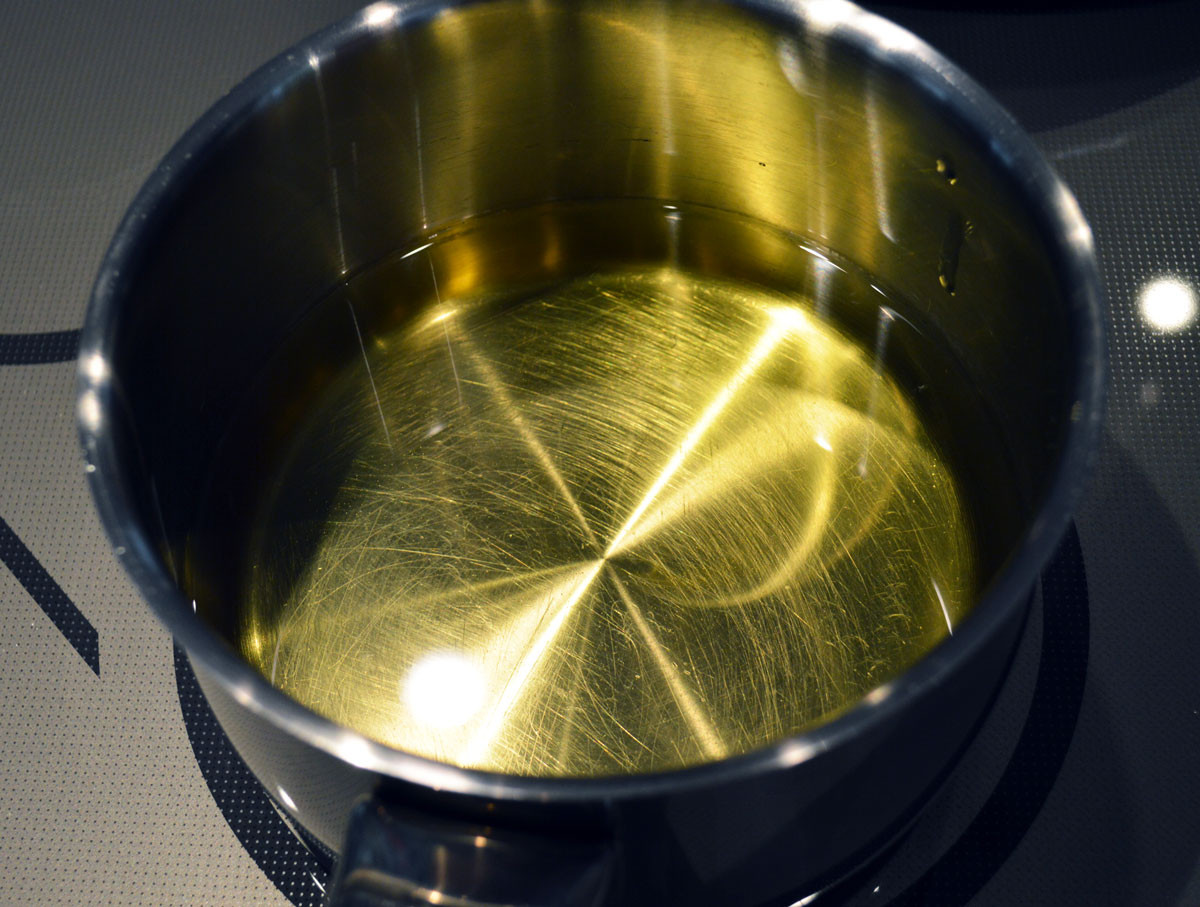 Once the dough mixing is almost finished, pour olive oil in a small pot and heat it on low medium heat. Don’t make it too hot or your cottage cheese balls will fry fast on the outside and will remain raw inside, and you don’t want that. 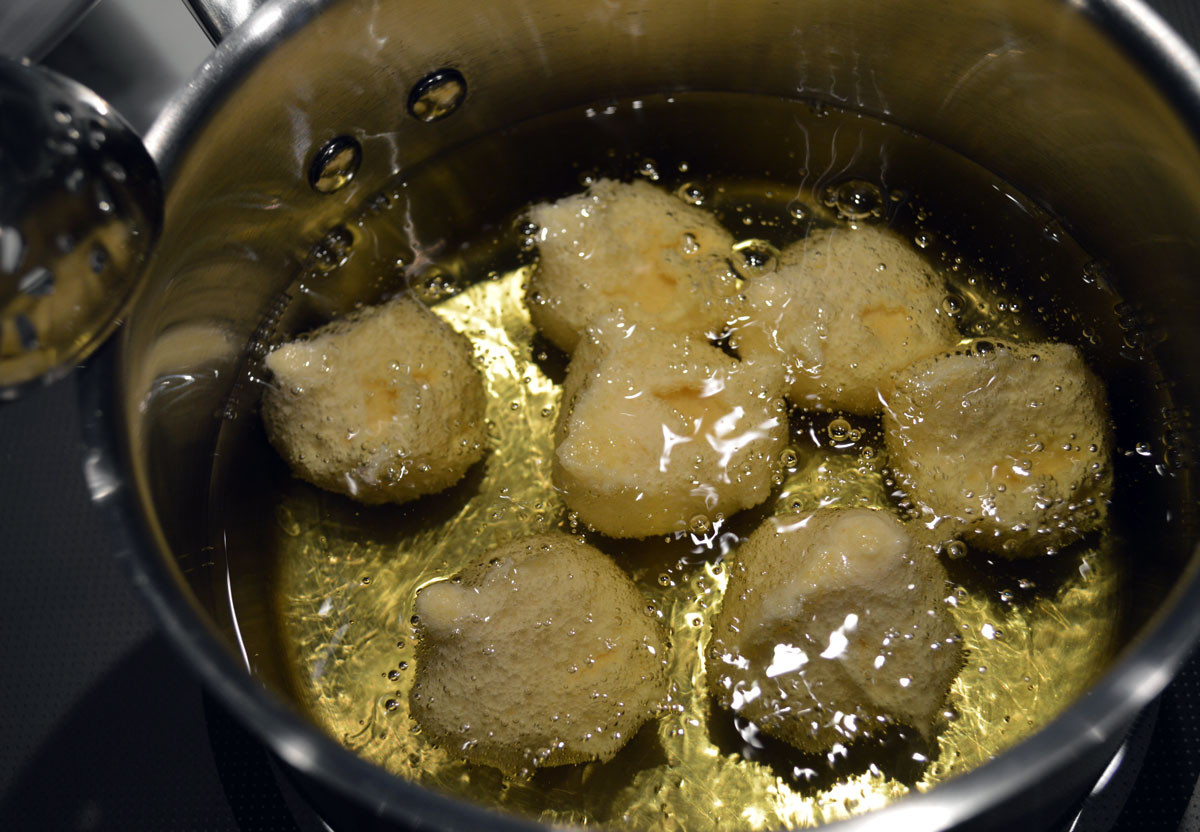 When the oil is hot, carefully slide a small ball of mixture into it, but be careful not to burn your fingers. I put 6-7 balls in a small pot to avoid overcrowding. Make the balls small to ensure proper cooking inside. 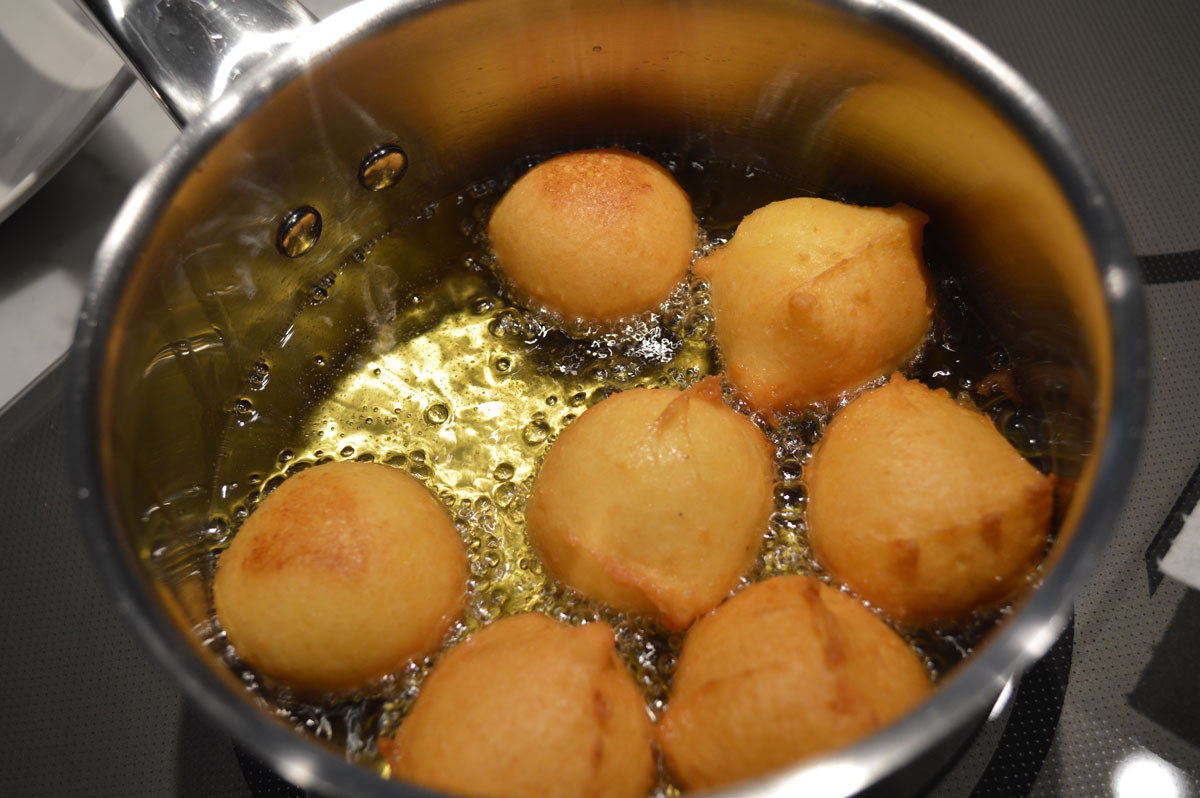 They become round right away and turn around periodically by themselves, but do help them with a spoon if you have to. Your goal is to have all sides equally brown. 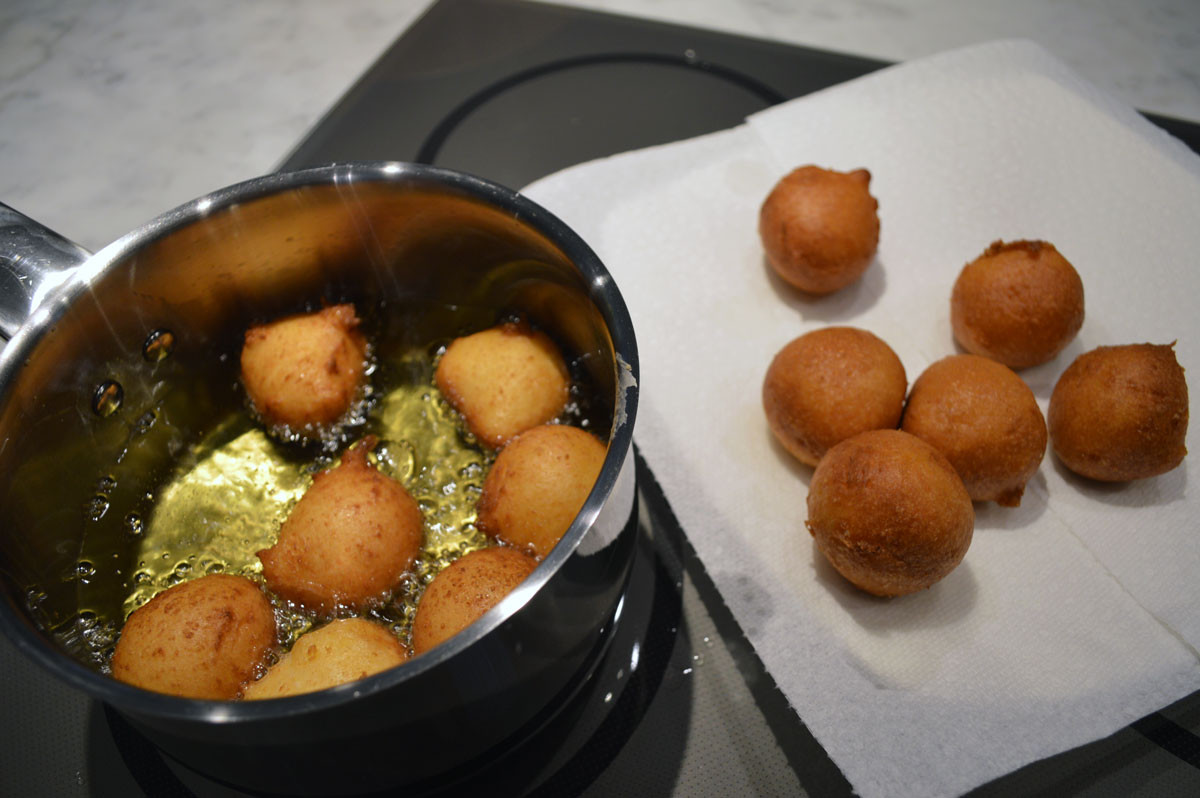 It takes about 4-5 minutes per batch. If they brown too much too fast, reduce the heat. 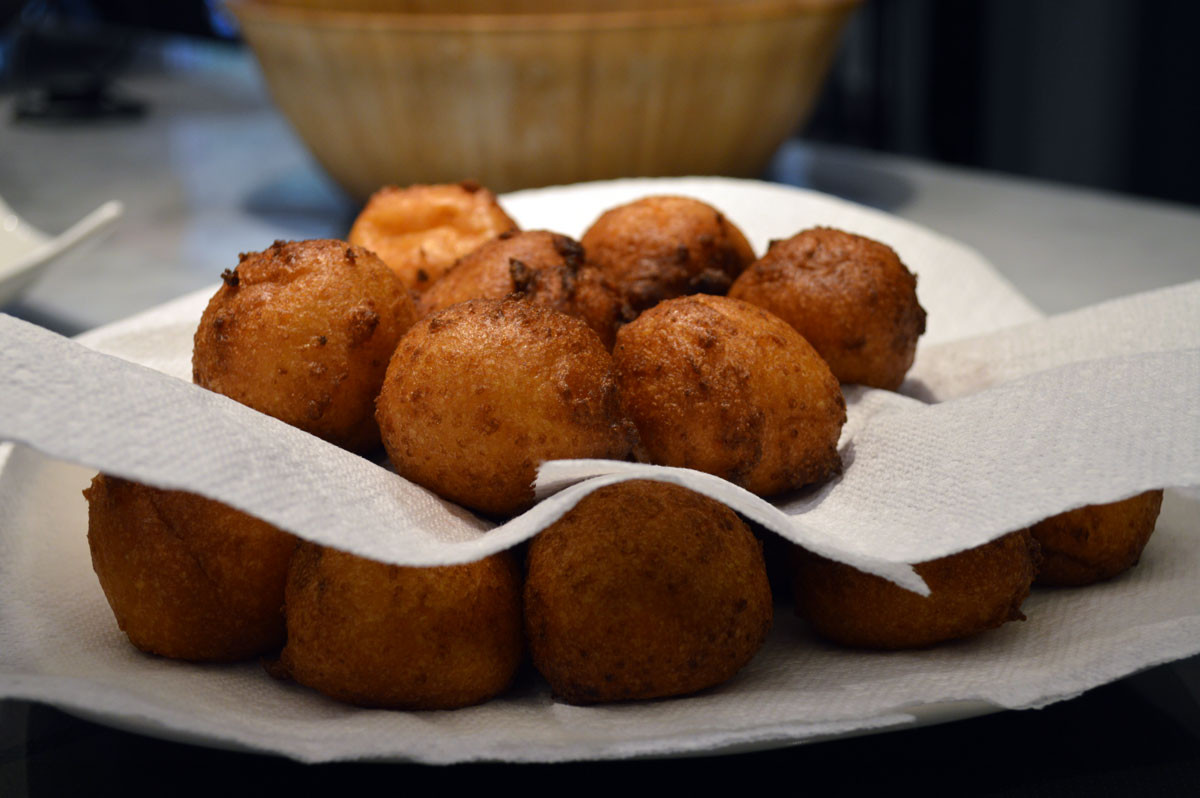 We place them on paper towels to collect excess oil after cooking. When you are finished with all of them, put them in a nice bowl and sift some confectioner’s sugar on top if you want. Enjoy them as soon as they cool off the same day, because next day they don’t taste nearly as good!

There is a mistake in the above title - this dessert is easily made with kids, but no baking is really taking place. It's a very fun project to do with children of just about any age, since no heat is needed and no hard work is involved.

Why not send your child to cooking camp this summer! There are many culinary camps to pick from all over the country. The best part is they are still accepting enrollment for those procrastinating parents!