New Customers: Save $60 over your first 3 boxes at Blue Apron.
Show Coupon

Blue Apron operates only in the United States. The weekly boxes contain ingredients and also include suggested recipes and ingredients for cooking. That must be cooked by hand by the customer.

I Tried Blue and Here Is My Verdict 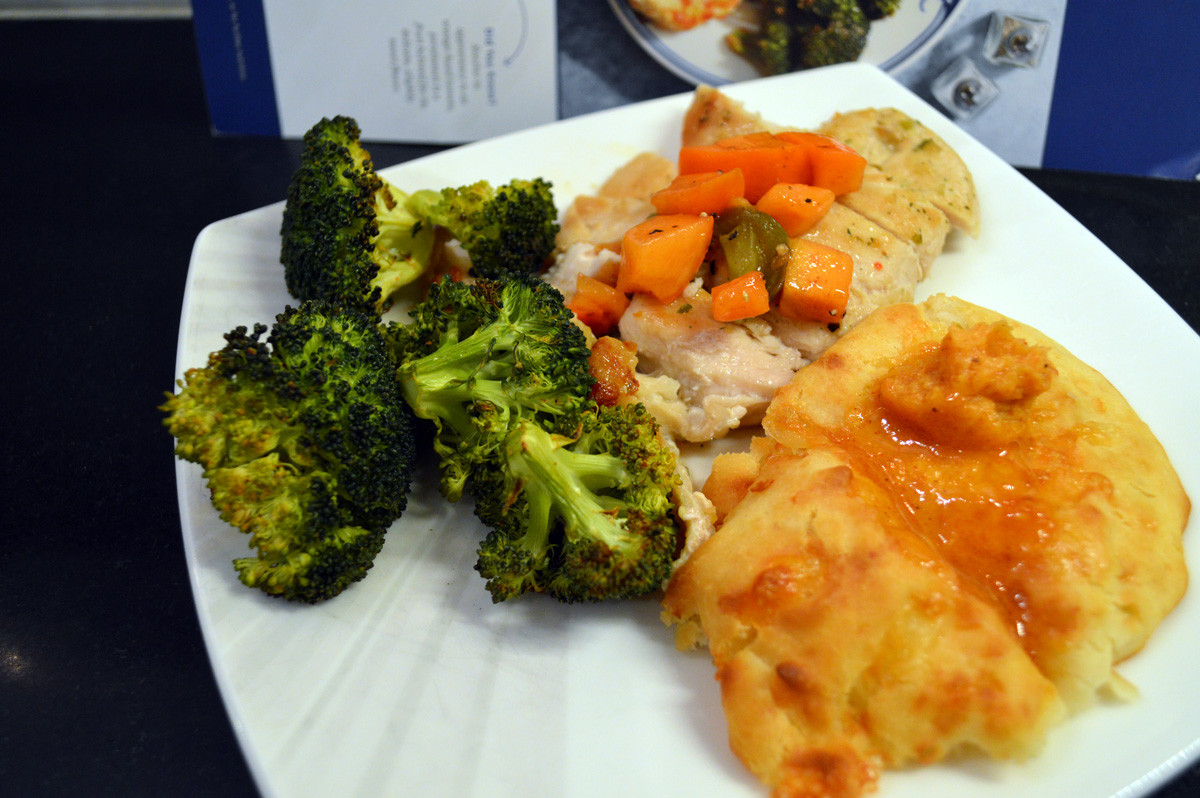 Today was my second time cooking with Blue Apron, not literally a blue apron though, but with meal kit delivery service. A week ago I made Pesto & Tomato Quiche, which had mixed family reviews. This evening Seared Chicken & Spicy Persimmon dinner was served. It had gathered more than last meal and no ingredient was spilled or broken before cooking, unlike last time. I can say that this cooking session improved my opinion about Blue Apron. 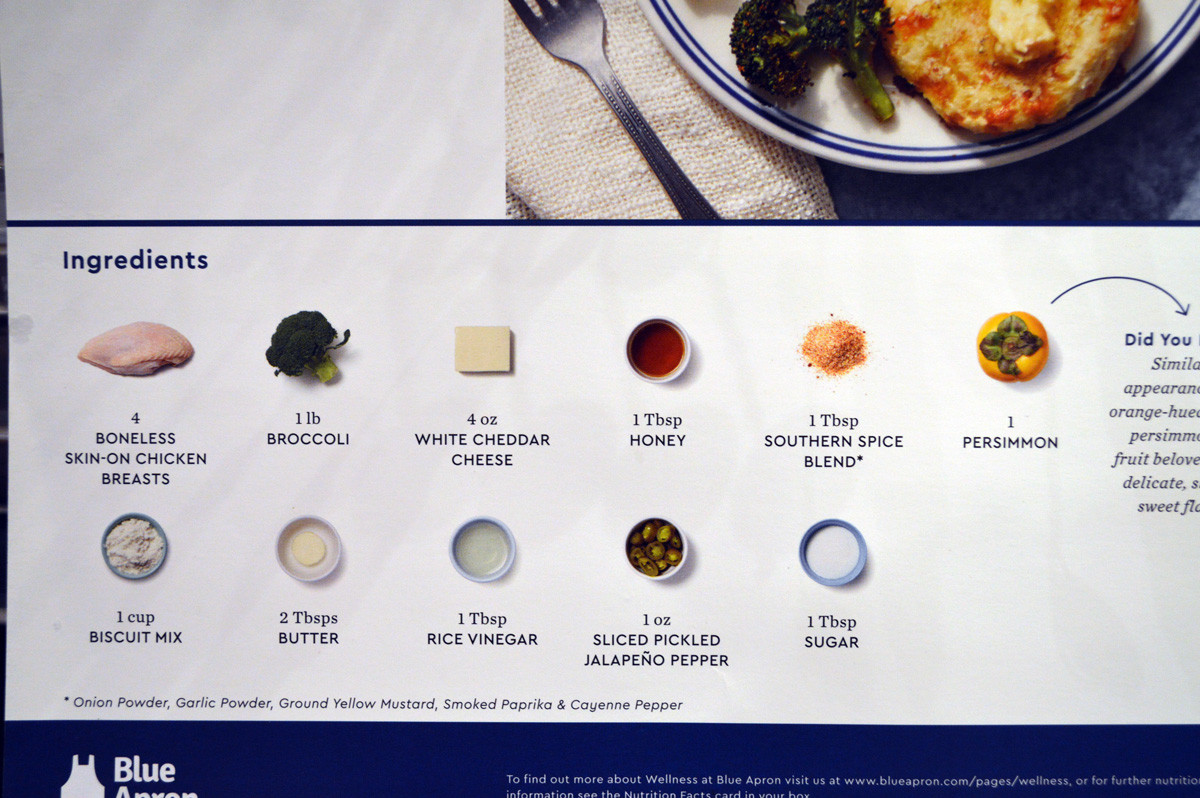 Since it wasn’t my first time cooking with this company, I knew what to expect – a couple of bags of ingredients, a recipe, and a frozen bag of chicken. Last time I had to figure out what ingredients go to which meal as they are not separated by recipes. I loved the no frustration aspect today.

I have to admit that all the ingredients were sitting in my refrigerator since Christmas, which is about three weeks. I was very pleasantly surprised that broccoli and persimmon looked good and not wilted or rotten. This proves that ingredients used by Blue Apron are fresh and of high quality. I still wish for organic options, but hopefully in the future.

Today’s recipe promised to take 30-40 minutes, but it probably took an hour. Part of that was due to the fact that my gas cook top got changed to induction one a few days ago and I am still getting used to the insane speeds of cooking, so I taking it slow because of fear of burning. And I also took pictures of every step. 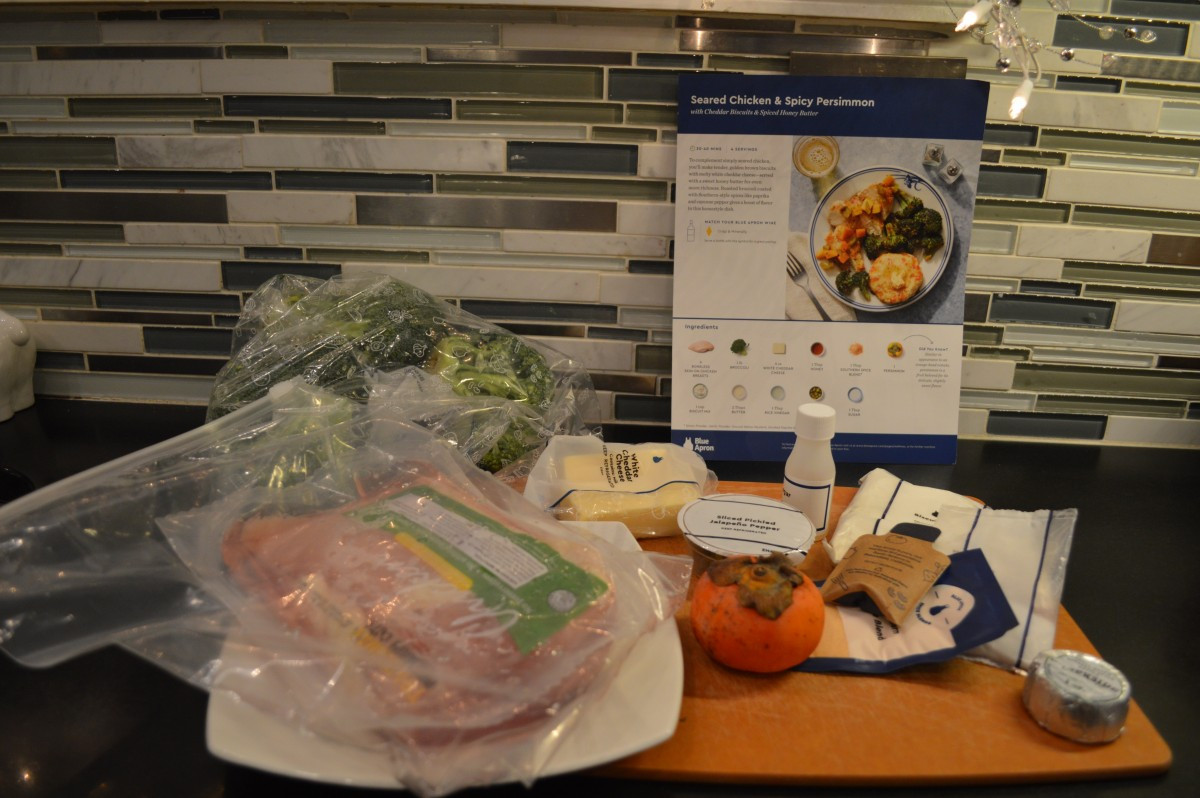 The list of ingredients was pretty clear and included everything needed for the meal besides olive oil, salt, and pepper. Again I didn’t have any wine with this meal, but the recommendation was for something crisp and minerally, whatever that means. Following this or the previous recipe is really easy, even my husband could do that.

All I had to do was to cut broccoli, cube persimmon, grate the cheese, season everything, and prepare the mixture for biscuits in three steps. 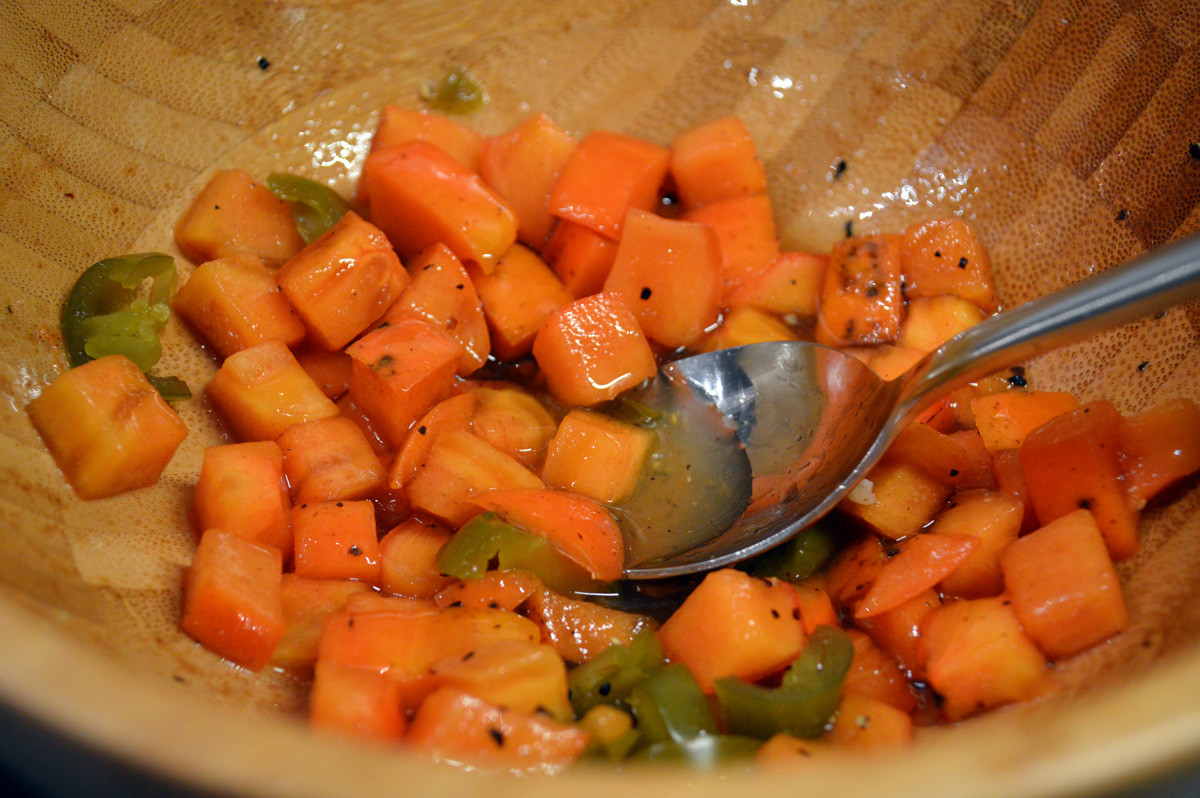 I made the spicy persimmon marinade at the beginning and then focused on cooking the chicken on the new non-stick pan and on new induction cooktop. 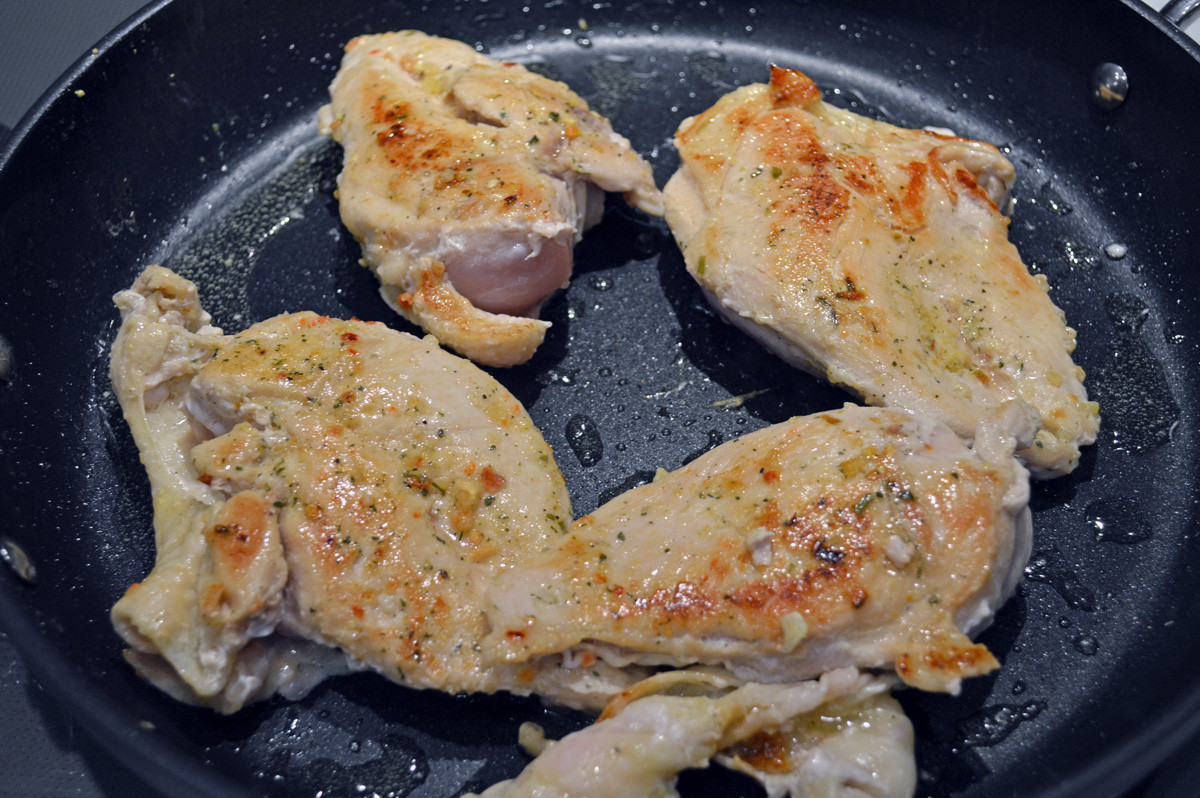 That took a while, but the result was brown on both sides chicken breasts that looked very inviting. 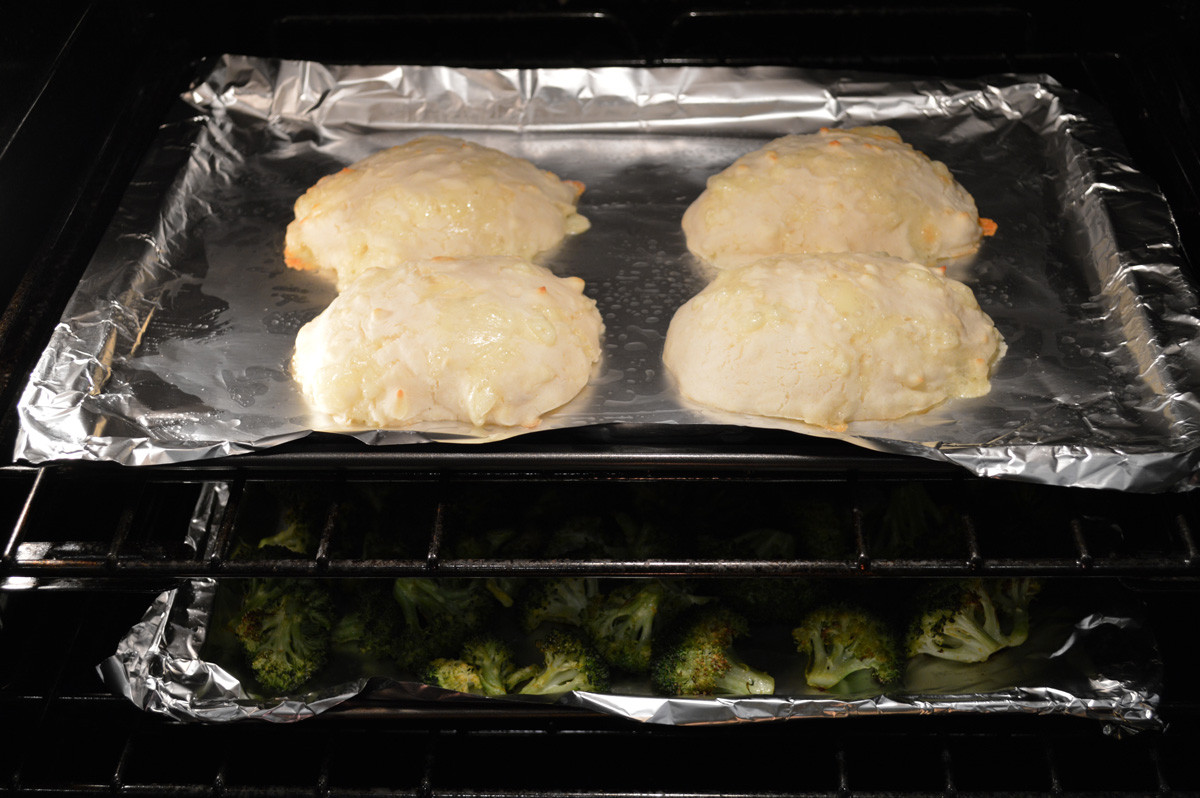 While chicken was being cooked, I set the broccoli in the oven and then added four biscuits on the upper oven rack. 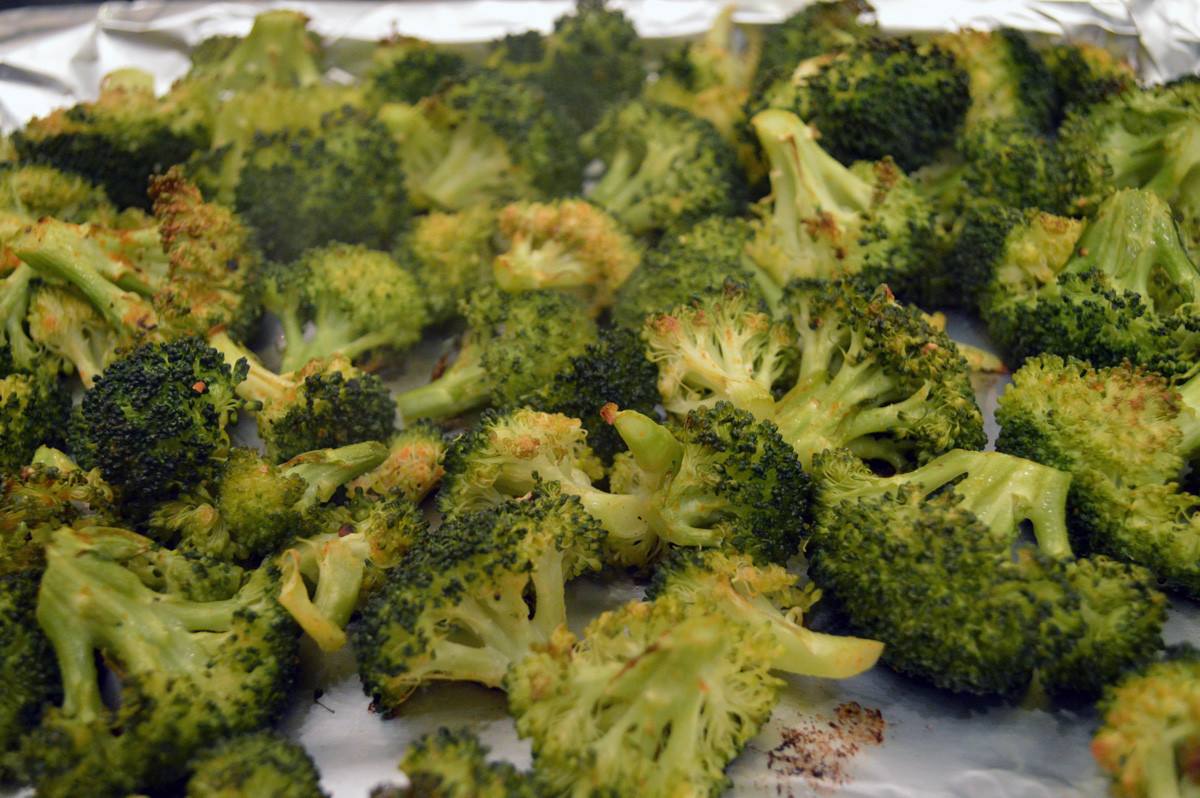 Since both had different cooking times, my broccoli got a bit overlooked and became a bit too brown on one side. It was not a big deal because there were so many of them that even with 1/3 wasted we still had more than enough. 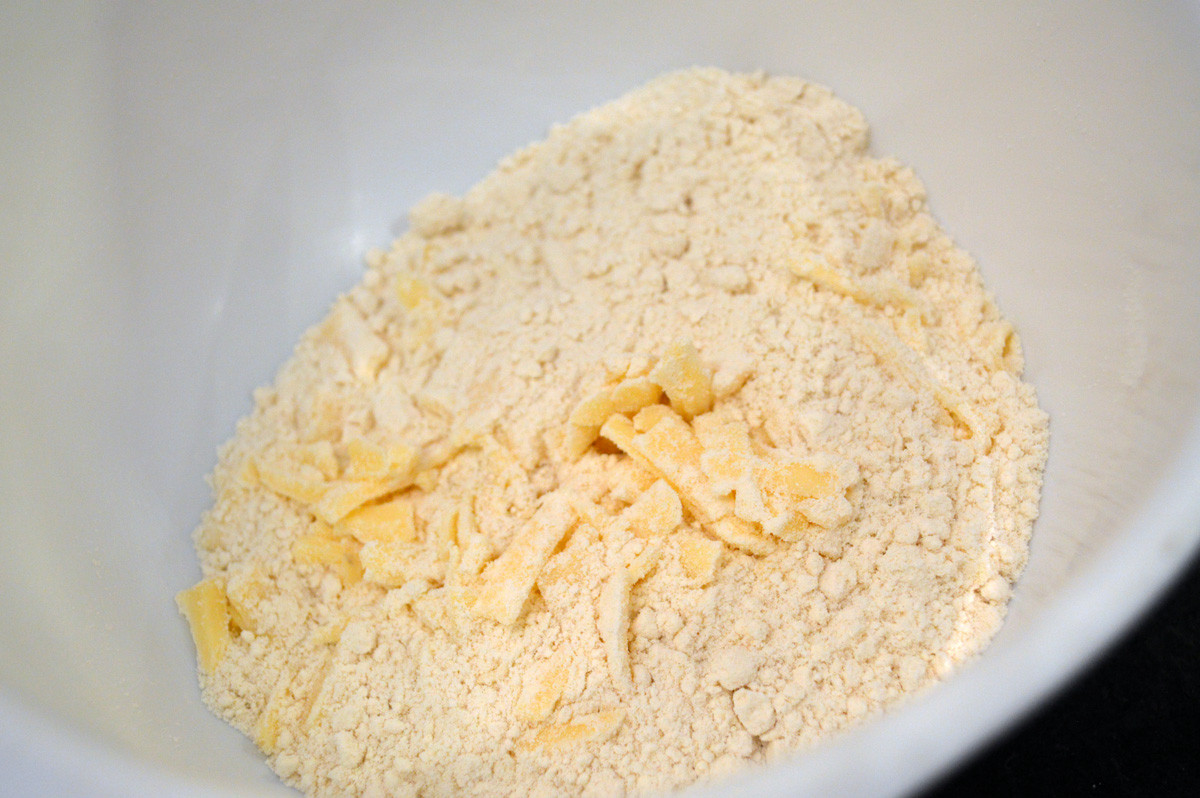 We are not form the South originally, so biscuits are normally not our thing, but these were good. 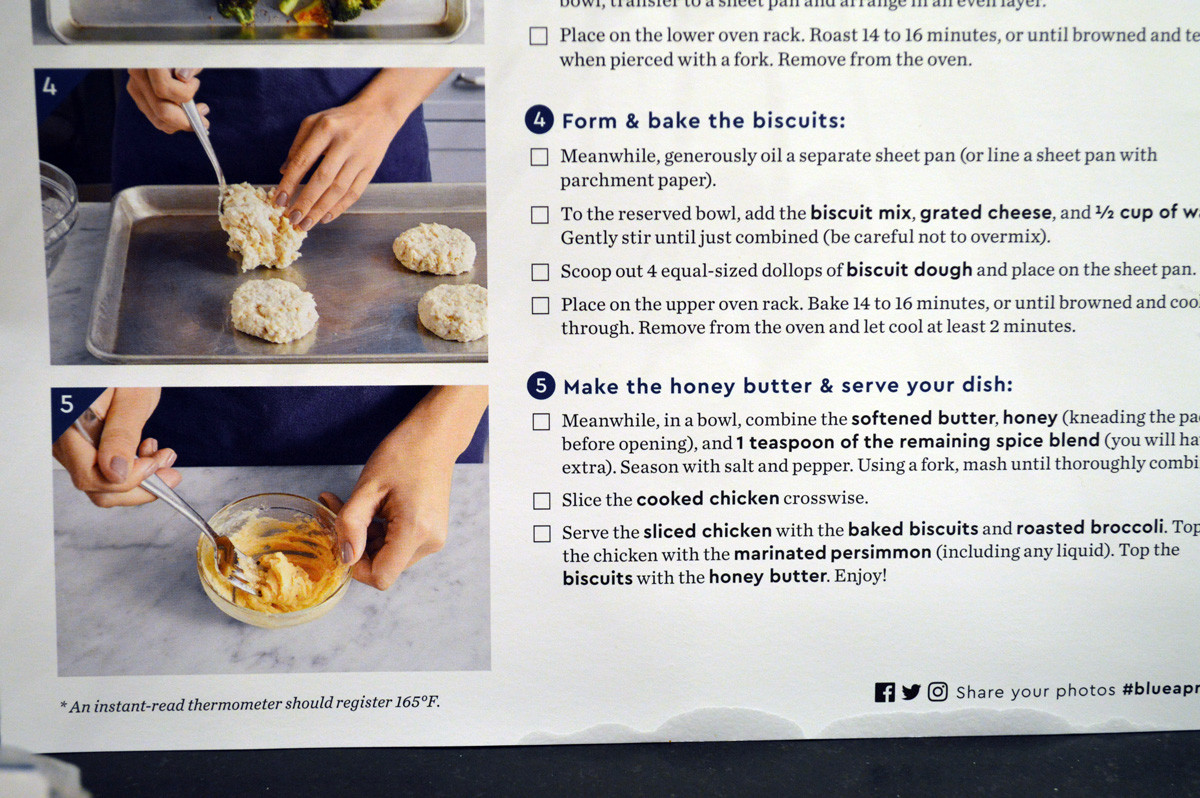 I had to mix cheese, biscuit mixture, and some water together and then shape them with a spoon onto the baking sheet. 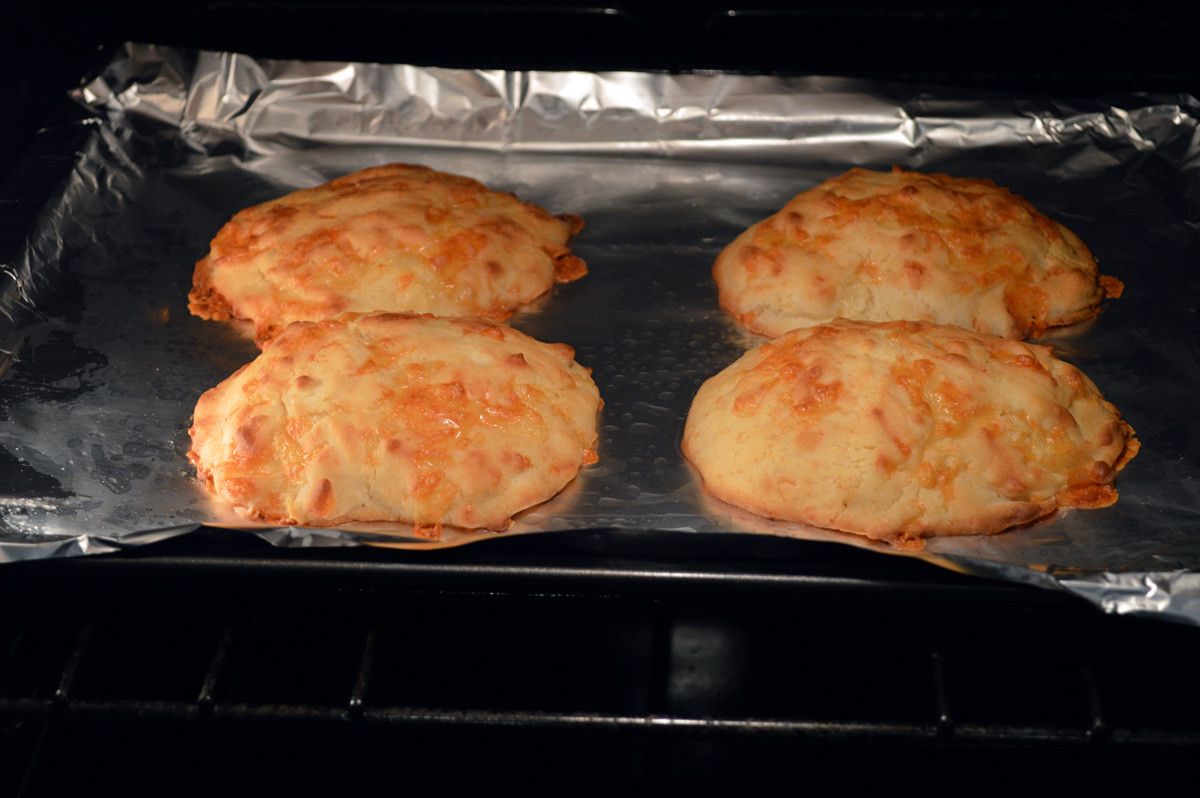 I used foil and even after I greased it enough the biscuits still stuck to it and were pretty hard to take off. 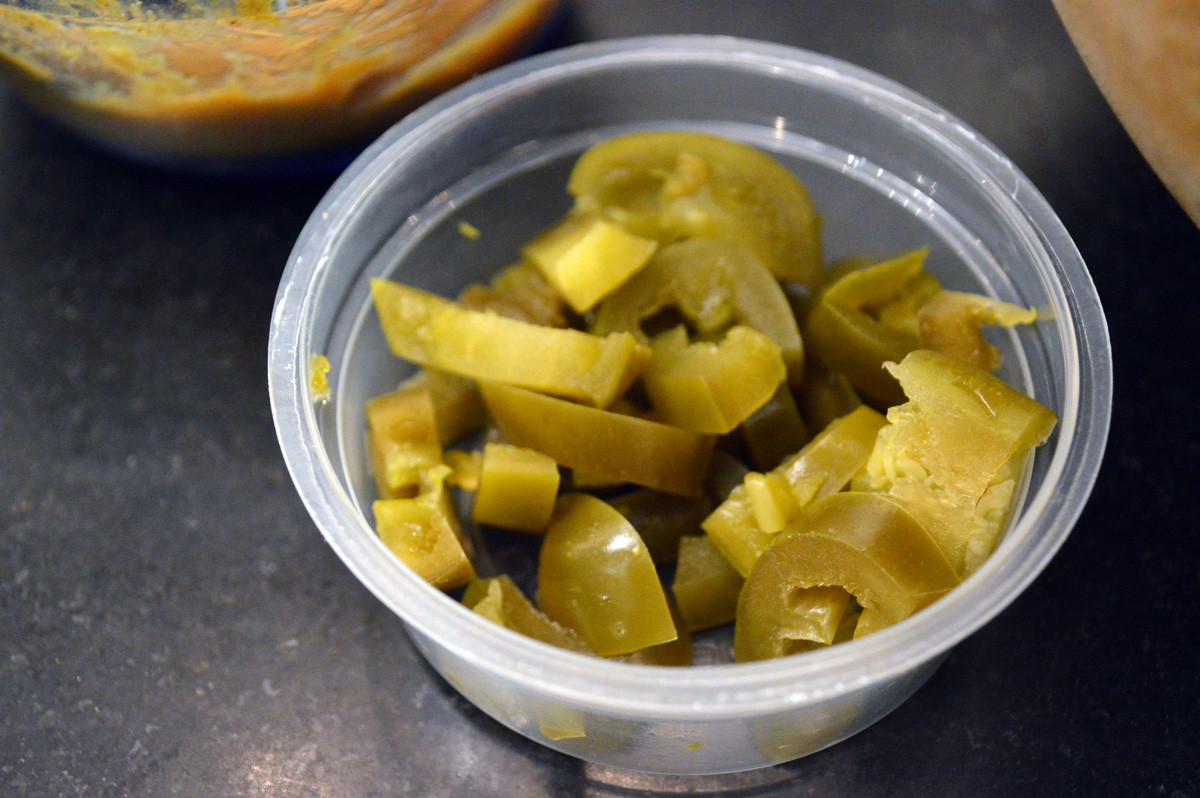 I should’ve used parchment paper, as the recipe suggested. 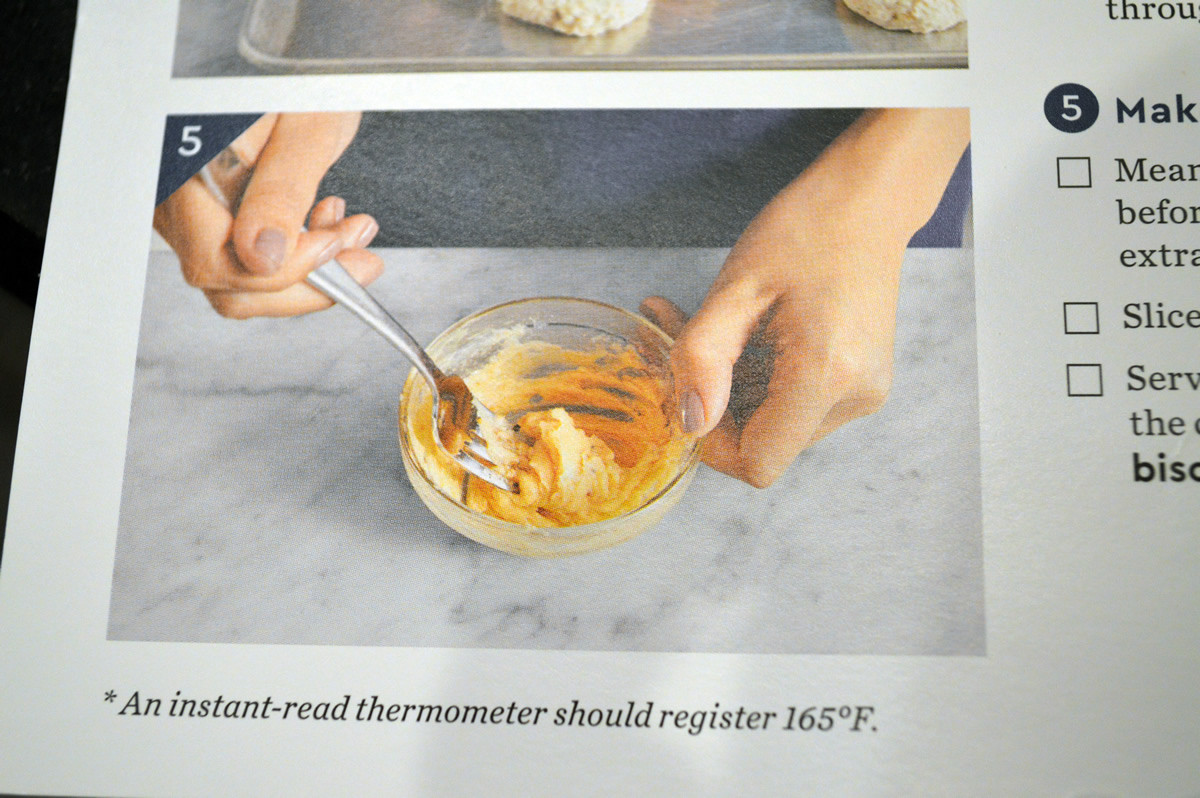 While all my meal parts were finishing cooking, I mixed butter, honey, and spice blend together to make honey butter that went on top of biscuits.

The spicy pepper and persimmon mixture was topped on chicken breasts on the plates. 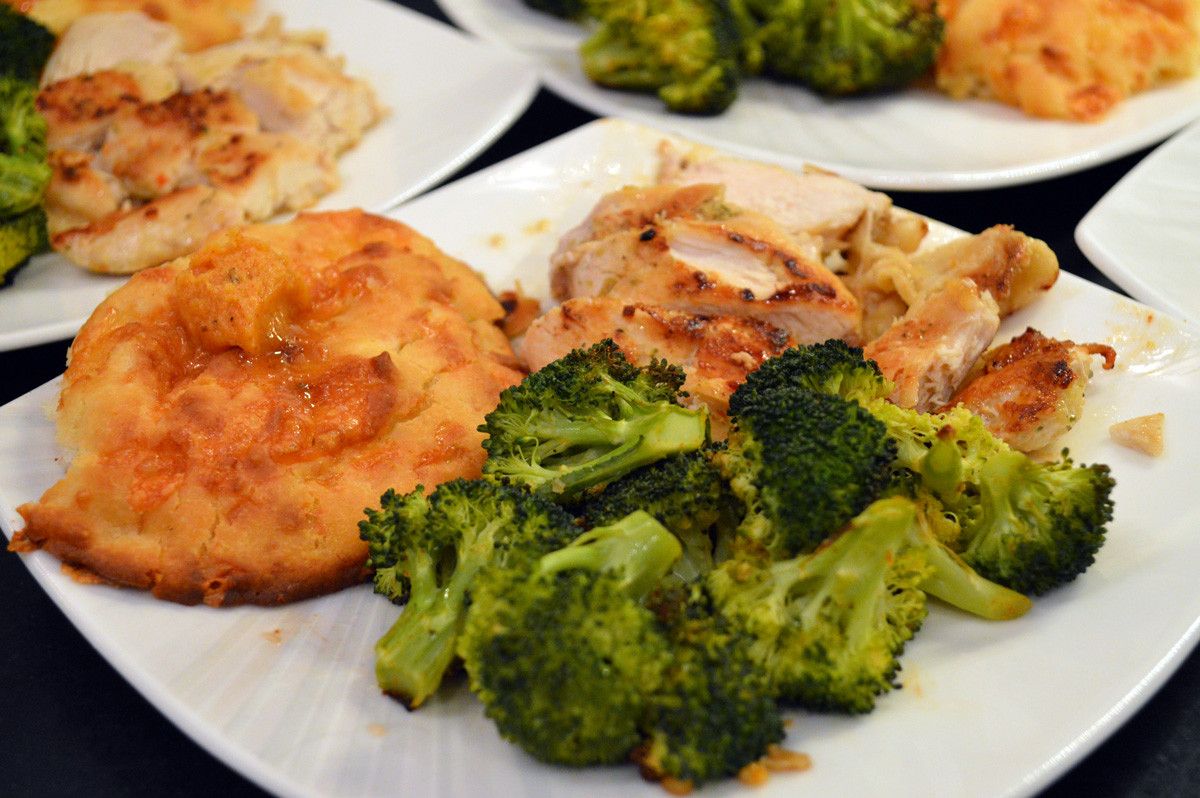 The prepared plates looked beautiful and colorful. I did not put any spicy fruit for kids, but used quite a bit of it myself. My husband and I really liked the food; kids ate a couple of broccoli and all the chicken, leaving me quite happy.

The cleanup was a breeze and we still managed to collect enough leftovers for tomorrow’s lunch. I am going to save this recipe for future cooking adventures, even if it’s rather simple and can be easily remembered, modified, and improved without strict following each step.

I think that ordering meal kits like that all the time might be hard for family budget, but it’s definitely worth it from time to time. The food is very fresh, tastes better than some restaurant meals, and is definitely cheaper than when all 4 of us go out. I love a lot of things delivered and groceries are definitely high on that list. The only thing I don’t quite like about this type of eating is the cleanup that is still needed, unlike when you go out.

In conclusion, I had a very positive experience this time and will definitely consider ordering Blue Apron again, especially if I will find a coupon or two, which happens more often than you might think. Happy cooking to all who got interested!

As a busy working mom of two I am always looking for ways to save time while still keeping my family healthy with home cooked food. I tried ready-to-eat diet deliveries and right away understood that it's not for me or my kids.